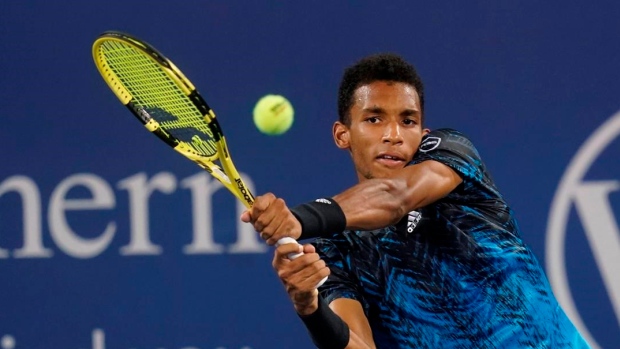 CINCINNATI — Canada's Felix Auger-Aliassime clinched his spot in the quarterfinals of the Western & Southern Open in Cincinnati Thursday with a 6-4, 6-3 win over No. 5 seed Matteo Berrettini of Italy.

The 21-year-old from Montreal won 3-of-11 break points across the one-hour, 34-minute match.

Auger-Aliassime, seeded 12th in the tournament, used a solid serve to overpower Berrettini, firing seven aces and winning 88 per cent of his first serve points.

Auger-Aliassime will face No. 2 seed Stefanos Tsitsipas of Greece in the semifinals of the ATP Masters 1000 event on Friday.

Dabrowski and Stefani, seeded sixth in the tournament, will face the No. 2 seeds Katerina Siniakova and Barbora Krejcikova, both of the Czech Republic, on Friday.

Auger-Aliassime, ranked 17th in the world, was facing Berrettini for the third time in his career on Wednesday, and came in without a win against the world No. 8.

He broke the Italian in the second game of the first set, only to be broken right back in the next game. Berrettini converted the only break point opportunity he had during the match.

The Canadian has played his next opponent, Tsitsipas, six times in his career, with the 23-year-old Greek taking four wins.

The duo last faced off in the quarterfinals of the Barcelona Open in April, where Tsitsipas, the current world No. 3, took a straight-sets victory.

Auger-Aliassime came into Cincinnati following a tough appearance at the National Bank Open in Toronto, where he lost his first match to Dusan Lajovic of Serbia in straight sets.

This report by The Canadian Press was first published Aug. 19, 2021.