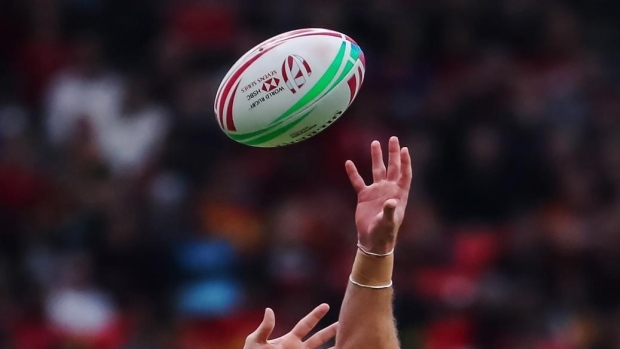 The pandemic has taken its toll on Canadian stops on the HSBC World Rugby Sevens Series.

Only seven of the men's core teams are taking part in next week's HSBC Canada Sevens in Vancouver with New Zealand. Fiji, Australia, Argentina, Japan, France and Samoa among those missing.

The Canadian men have been drawn in a pool with the U.S., Chile and Germany.

The 12-team event, slated for Sept. 18-19 at B.C. Place, marks the return of the HSBC World Rugby Sevens Series. Canada finished third in Vancouver in March 2020, the last World Series tournament before it was shut down by the pandemic.

With participation limited due to COVID-19 and pandemic-related travel restrictions, an accompanying women's competition will feature just four teams: Canada, Britain, the U.S. and Mexico.

On the men's side, Pool A in Vancouver features South Africa, Kenya, Spain and Mexico. Pool B is made up of Britain, Ireland, Hong Kong and Jamaica. Canada is in Pool C.

The Mexican men’s and women’s sides were late additions after France withdrew due to travel issues.

The women’s "Fast Four" competition format will see the teams play each other before the top two decide the gold and the other two meet for third place.

The same teams will compete in Edmonton Sept. 25-26.

In the wake of the Tokyo Olympics, Canada is fielding young teams with a lot of new faces.

On the men's side, co-captain Nathan Hirayama and Conor Trainor have both retired.

"This selection features some new and exciting players as we turn our attention to the shortened buildup to the 2024 Olympics in France,” Canada men's coach Henry Paul said in a statement. “After the two (Canadian) events on the 2021 Series, we will look to bring together these new players with some returning veterans that are taking a deserved rest in order to be ready for the start of the full 2022 HSBC World Rugby Sevens Series in Dubai.”

Attendance in Vancouver will be capped at 50 per cent of B.C. Place's lower bowl capacity, making about 13,500 tickets available. Last year, a crowd of 39,533 — the largest single-day crowd in Canadian rugby history — saw the Canadian men reach the podium.

The crowd will be bigger outdoors at Edmonton's Commonwealth Stadium. Rugby Canada is making half of the 32,000-capacity lower bowl available and may push that to 60 per cent if demand warrants.

World Rugby had previously said six men's and four women's rounds were scheduled in the final four months of 2021. Instead, the two Canadian events will constitute a mini-season.

The 2022 season will start with back-to-back combined events in Dubai. The first, Nov. 26-27, will be held behind closed doors while the second, Dec. 3-4, will see fans in attendance at the Sevens Stadium.

The full 2022 schedule will be announced later this month with "alternative host options'' being considered to replace Australia and New Zealand events in January.

World Rugby says due to the pandemic-shortened season, there will be no relegation from the 2021 Series and the results will not count toward seedings for future events.

Next year will also see rugby sevens at the Commonwealth Games in Birmingham (July 29-31) and the Rugby World Cup Sevens in Cape Town (Sept. 9-11) following the World Series.

Last season, the men got in six-of-10 planned tournaments and the women five-of-eight before the schedule ground to a halt. A women's event in Langford, B.C., scheduled for early May last year was one of the tournaments cancelled.

This report by The Canadian Press was first published Sept. 10. 2021