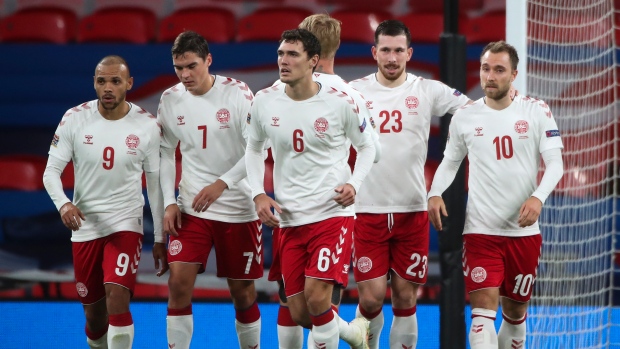 Group B: Denmark vs. Finland

Technically, Finland isn’t considered a Scandinavian country, but Saturday’s Group B opener might be the closest thing to a Battle of Scandinavia that Euro 2020 has to offer as the Finns kick off their tournament against Denmark in Copenhagen.

Coverage begins on Saturday on TSN1/3 at 11am et/8am pt. You can also watch the game on TSN.ca, the TSN app and TSN Direct.

While Belgium is a heavy favourite to win the group, Kasper Schmeichel and the Danes enter the tournament as the other team most likely to emerge from Group B and, perhaps, one of Euro 2020’s dark horses to make some noise in the knockout round.

But as is always the case in major tournaments like this, those deep runs can only happen if teams take care of the business they’re expected to, and for Denmark that means a victory over one of the biggest underdogs in the entire tournament in Finland.

Historically, these two teams have met nearly 60 times in the past, but never in a major tournament – mainly because Euro 2020 marks Finland’s bow on the world stage. Getting here is a huge accomplishment for Finnish football, so for Markku Kanerva’s team, it might feel like they’re playing with house money right now. Because of that, the Finns can approach Saturday’s match with fearlessness, rather than nervousness.

"Denmark have a very good team,” Kanerva said. “If we look at their last few matches, they've had some magnificent results and have scored a lot of goals. Their defence has worked and they have some great individual players. Denmark are a really tough team and they get to play on home soil, but we have proved we can challenge even bigger countries than Denmark."

The Danes possess a great deal of experience, quality and world-class talent in the likes of Inter midfielder Christian Eriksen, Milan defensive stalwart Simon Kjær and Barcelona striker Martin Braithwaite. The gulf in quality between these two sides is apparent, but Danish manager Kasper Hjulmand knows that it can be easily made up if his team can’t match Finland’s level of effort.

The all-time series between the two countries leans heavily towards the Danes. Denmark holds a 38-11-10 mark against Finland, but the two sides haven’t met in nearly a decade. The last match between the two was in November of 2011. The Danes came out as 2-1 victors that night thanks to goals from Arsenal’s Nicklas Bendtner and Liverpool defender Daniel Agger.