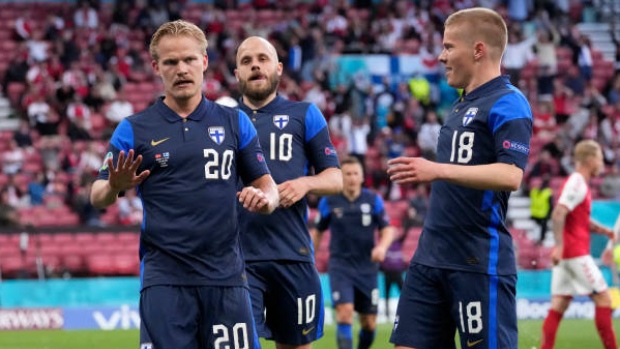 The thing about major international tournaments is that the margin for error is so razor-thin that must-win games can sneak up on you almost immediately. Such is the case with Russia, currently last in Group B, when it comes to Wednesday’s date with Finland, who were winners on Matchday 1. A loss to the Finns likely dooms Russia from getting out of the group stage.

Coverage of Finland and Russia starts Wednesday morning at 8:30am ET/5:30am PT on TSN 1/3/4 and streaming on TSN.ca, the TSN App and TSN Direct.

But despite being thoroughly outplayed in their 3-0 loss to Belgium on Saturday, Russia has used the days in between matches to refocus and prepare for a team that they’ve scouted well.

"Finland have just beaten Denmark; they are a tough, organized team,” Russia manager Stanislav Cherchesov said. “They defend deep and are dangerous on the counter. We'll have to do our best to break them down and avoid giving them chances on the break."

Midfielder Aleksei Miranchuk says that this Finland team gears up to dig in deep and, in knowing that, Russia must be patient in order to break their resolve.

"As [Finland] tend to defend most of the time, they are comfortable with doing that and launching counter-attacks,” Miranchuk said. “We must pressure them to stop them launching those attacks. First, we need to be patient. We must score, pressure, play fast and with confidence, but without any fuss."

Fellow midfielder Roman Zobnin also wants to see fewer unforced errors. Zobnin says that Russia shooting themselves in the foot against the Red Devils is a big reason why they were 3-0 losers on Saturday.

"We need to eliminate the silly mistakes we made, have less flaws in our game, play the ball and think faster: everything football players need to do in order to play at this level,” the Spartak Moscow man said.

For Finland, the match is their return to the pitch following Saturday’s emotionally draining match with Denmark in which Danish midfielder Christian Eriksen incurred a cardiac arrest on the field in one of the scariest scenes in the sporting arena in recent memory. Finland claimed a 1-0 win after the match was restarted hours after Eriksen was transported to hospital.

Midfielder Rasmus Schuller acknowledges that it’s been difficult for his team to get their minds back on football.

“We have not been able to put what happened on Saturday behind us entirely, but the fact is that we are playing again on Wednesday,” Schuller, who plays his club football at Swedish side Djurgardens, said. “It's just round the corner, and we're here to play football for Finland. This is a first for Finland and we want to advance from our group. Although we're still thinking about what happened, it's now time to think about Russia."

While the Russia-Finland sporting rivalry is considerably more pronounced on the ice, there is some history between the two nations on the pitch. Russia is 4-0 in four previous matches against Finland, with the last game between the two coming in June 2009 when Russia was a 3-0 victor in Helsinki.

Cherchesov and co. will hope history will be on their side in St. Petersburg on Wednesday.