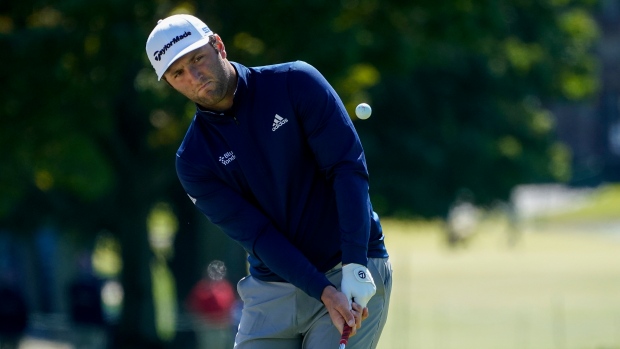 Normally one of the crown jewel events on the calendar, it’s mildly surprising that only three of the top 10 players in the world are teeing it up, especially because Torrey Pines South Course will host the U.S. Open in June.

This event used to be dominated by Tiger Woods, who has won it a record seven times but he won’t compete while he rests an ailing back following surgery.

In recent years, winners at the Farmers Insurance Open have had an international flair, with four in a row and five of the last six champions coming from outside the United States.

The first two days, the players alternate between the considerably easier North Course and the sterner test that is the South Course, and then on the weekend everyone tees it up at the South.

Six Canadians are playing this week, with one of them sporting considerably shorter odds than the rest.

Corey Conners, who has five straight top-25 finishes, is +5000 on the board to win outright.

The rest are considered long shots, with Adam Hadwin and Mackenzie Hughes at +12500 and Roger Sloan, who was in the mix into the third round of last week’s American Express, at +25000 to earn his first tour title.

Rounding out the Canadian contingent are David Hearn and Michael Gligic, who are both +50000 massive darkhorses to lift the trophy on Sunday.

Here's our first look at the field for the Farmers Insurance Open.

Rahm, McIlroy have both had success at this tournament

It’s very difficult to select between the top two favourites on the board in Jon Rahm and Rory McIlroy, particularly because they’ve both played well at Torrey Pines.

Rahm won his first PGA Tour event here in 2017, and then led after 54 holes last year before finishing second.

McIlroy has teed it up twice, and has captured a tie for fifth and a tie for third.

Rahm was expected to play in the American Express last week, but pulled out with an injury to his back.

With both playing well at this track historically, and with McIlroy sporting slightly longer odds, sticking with him might be worthwhile given the potential status of Rahm’s back injury, which might hamper him.

Past Five Winners of the Farmers Insurance Open

It really isn’t a huge stretch to think that Corey Conners of Listowel, Ont., could find himself in the mix on the back nine Sunday.

Included in that cluster of events is a T-10 finish at the Masters.

The 2019 Valero Texas Open champion is known to be a premier ball striker, though he’s had a balky putter in the past.

While he still doesn’t find himself in the upper echelon of the dance floor in the 2020-21 campaign, he’s been much better in that category.

In last two tournaments, he was tied for second in birdies at the Mayakoba Classic and was first in strokes gained: tee-to-green at the RSM Classic.

At +5000 odds, he’s lumped in with golfers like Billy Horschel, Cameron Smith and Will Zalatoris. You’re getting him at decent value to win outright, or perhaps for a top-10 wager.

If you’re looking to find some fantastic value on a player who’s had great success at this track, look no further than Brandt Snedeker – though it comes with a caveat.

He’s also posted three other top-10s at this venue in his career, including a tie for third just last year.

That means he’s been inside the top-10 in seven of his last 11 trips to Torrey Pines, which is a stellar record.

There is one caveat to consider, however, and that has been his recent form.

He’s missed the last three cuts, and the last time he had a top-10 on the tour, it was at this event last year, a span of 21 events.

Though it’s probably too much to expect the light bulb to go off and for him to contend to win the title like he has in recent years, a top-10 or top-20 bet is most definitely very palpable and could be in the cards given his success at this tournament.