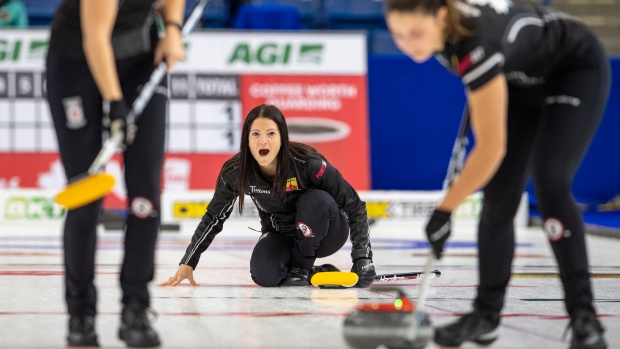 First place is on the line in the afternoon draw at the Tim Hortons Curling Trials as Brad Jacobs and Brad Gushue, both 3-0, go head-to-head in the feature game.

Finishing first after round-robin play will get you a bye straight to Sunday’s final and Tuesday’s game could go a long way in determining that outcome on the men’s side.

Gushue finished first after round-robin play in 2005 en route to winning the Trials and Olympic gold in Italy. Jacobs did the same during his Olympic championship run in 2013. In fact, every Canadian Olympic Trials winner on the men’s side has finished first in the round robin and earned the bye to the final.

Mike Harris in 1997, Kevin Martin in 2001, Gushue in 2005, Martin again in 2009, Jacobs in 2013 and Kevin Koe in 2017 all topped the table in round robin play and would eventually stand atop the podium as Canada’s Olympic representatives.

Jacobs, 36, likes what he’s seen from his team so far in Saskatoon.

“I’m just impressed how we’re managing ourselves as athletes and really just a collective effort that we bring to the ice each and every game,” Jacobs told the media after Monday’s win over Brendan Bottcher. “It’s just great to see and a lot of fun to be a part of.”

Tuesday’s Jacobs-Gushue clash will have a total of six players who have captured gold at the Winter Olympics.

Jacobs says it’s a privilege to compete in events such as the Canadian Curling Trials.

“It’s incredible to be a part of such an elite event and to be amongst all these athletes is something that we’re always going to look back on and remember and cherish and be grateful for,” explained Jacobs. “It’s really neat. You know, not very many people get an opportunity to be world-class at anything. The fact that we’re right in the mix with all these great teams is pretty special.”

Team Gushue second Brett Gallant hasn’t won Olympic gold but remembers watching Gushue and Mark Nichols surprise the nation with their Trials win in 2005 while wearing bright orange jerseys, a colour Team Gushue has brought back for this year’s Trials.

“I was only 15 at the time and I was cheering for the boys as much as anybody, being from the East Coast,” said the 31-year-old. “They were pretty young at the time, so it’s kind of cool to put it back on and hopefully it gives us a little bit of good mojo for the rest of the week.”

This isn’t the first major clash between the two world-class skips. Gushue and Jacobs have been going head-to-head since 2008 and have been very even, with the St. John’s skip holding a 28-27 record all-time against his counterpart from Sault Ste. Marie, Ont.

Other matchups Tuesday afternoon, including Bottcher (0-3) taking on Mike McEwen (2-0). Bottcher and the Brier champs will likely need to run the table over their last five games to have a chance at the three-team playoff.

Saskatchewan’s Matt Dunstone, also 0-3, is in the same boat and will need to start turning the tide on Tuesday with a game against John Epping’s 1-2 rink from Toronto.

Finally, Jason Gunnlaugson (0-2) takes on Tanner Horgan (1-1) in a matchup of Pre-Trials qualifiers.

Kevin Koe has the day off.

The women’s field takes centre stage in the evening draw.

You can watch Jennifer Jones take on Kerri Einarson in the feature match at 8 p.m. ET/5 p.m. PT on TSN 1/3, TSN Direct and the TSN App.

Jones and her 4-0 rink from Winnipeg will take on provincial rival Team Kerri Einarson, who got back into the win column at 2-2 after a win over Team Laura Walker Monday night.

The six-time Scotties champion has been looking a lot like her 2013 form when she captured the Trials in her hometown before winning gold for Canada in Sochi, Russia. Four years ago in Ottawa, Jones started off the Trials with five straight wins before dropping the next four, including a semi-final clash against Rachel Homan.

The 47-year-old shot 99 per cent in the opener against Team Krista McCarville and hasn't slowed down since. Third Kaitlyn Lawes might be the team's MVP so far in Saskatoon, shooting no worse than 84 per cent in each of their first four games with two performances of 92 per cent or better.

On the other side of the sheet, it's been an up-and-down week for Einarson and the two-time defending national championship, but they are still very much in the thick of the playoff race.

All-time, Jones has a 25-11 record against Einarson, including taking their only matchup against each other this season in October.

Team Rachel Homan, fresh off their first win of the tournament, will take on Team Tracy Fleury, the hottest team in curling this season.

Team Fleury are 3-0 in Saskatoon and 33-5 on the season, winning three events on Tour.

“We definitely feel like we’re in the zone,” said Fleury after routing Team Krista McCarville Monday night. “We feel like we’re peaking at the right time. It’s just been a strong season for us and we’re happy that we were able to bring that into this week.”

Fleury shot 100 per cent in her eight-end win over McCarville.

The defending champs in Team Homan had their backs against the wall after dropping their first two games but got some breathing room Monday night thanks to a win over Team Kelsey Rocque.

All-time, Homan has dominated Fleury, taking 28 out of 35 head-to-head matchups, including the last three.

“That’s all you can do really, is stay in the moment and in your game,” said Homan, a three-time Scotties champ. “It doesn’t help you to look at other scores. We just have to keep staying in our lane and keep trying to make the next shot.”

Other matchups include Casey Scheidegger (2-2) taking on Rocque (0-3) and McCarville (1-3) battling Jacqueline Harrison (2-1).

Speaking of Team McCarville, the foursome from Thunder Bay easily had the tweet of the tournament Monday night after a blowout loss to Team Fleury.

“You know you had a bad night when you get home to watch the end of the broadcast that you were the feature game in,” they wrote, poking fun at themselves while watching the end of the draw from their hotel room.

No giving up here. We’ll be better tomorrow— next game is Tuesday at 8pm EST. pic.twitter.com/G9q7no8psZ

Team McCarville is always a fan favourite and it’s easy to see why after tweets like this.