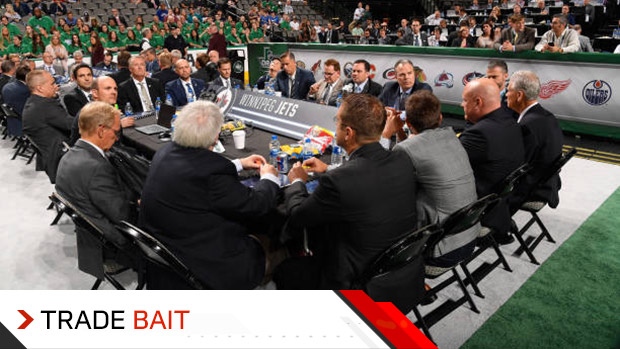 One year ago, the Winnipeg Jets traded their first-round pick – the same currency Kevin Cheveldayoff used to build Jets 2.0 from the ground up – for the most impactful acquisition of the deadline period in Paul Stastny.

It was one of seven first-round picks dealt last season, the most at any deadline in a decade.

Stastny helped get the Jets within three wins of the Stanley Cup Final.

The Jets’ first-round pick is indeed in play one year later, the latest asset to join the TSN Trade Bait board on Monday.

But the time is now for Winnipeg to make a run at a Stanley Cup. The Jets’ window to win is wide open. Plus, if you’re Cheveldayoff, you never know how many kicks at Lord Stanley’s mug you’ll get, considering the pending cap crunch in trying to re-sign Laine, Connor, Trouba and maybe even Tyler Myers this summer.

The Maple Leafs were the first team to move their first rounder this season, which they used to acquire defenceman Jake Muzzin from Los Angeles on Jan. 28. Cheveldayoff and the Jets are believed to be big-game hunting, doing their due diligence on a number of marquee names, including Mark Stone, Matt Duchene, Wayne Simmonds and Micheal Ferland, among others.

The Jets' No. 1 priority is a second-line centre, the same role Stastny played last year on their run.

The Jets are one of a handful of teams with potential top picks in play, including Central Division rival Nashville, Tampa Bay, Calgary, Boston and Pittsburgh.

Here is the latest TSN Trade Bait board, which always seeks to blend a player’s prominence with his likelihood of being traded: