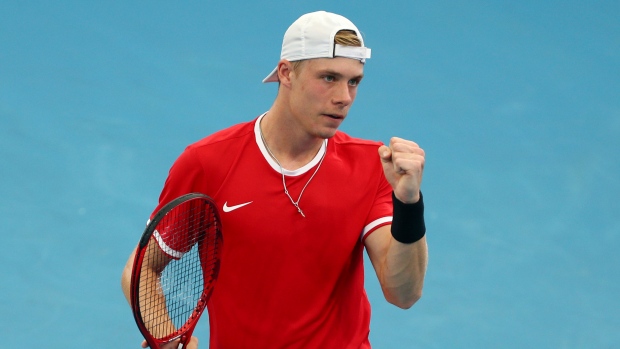 Canada's No. 1 player on the ATP Tour has done a complete 180 since last summer. Denis Shapovalov lost nine of eleven matches during a forgettable clay and grass season, and his ranking slipped all the way back to No. 38 in the world. However, since coach Mikhail Youzhny came on board in August, Shapovalov has turned his game around, posting remarkable results and now a career-high ranking of No. 13 heading into the Australian Open. With his first career title now out of the way, there is no doubt expectations and goals are being raised in 2020. The 20-year-old has already posted two top-10 wins this year over Stefanos Tsitsipas and Alexander Zverev and came very close to beating Novak Djokovic, losing in a third set tiebreak at the ATP Cup quarter-finals. Shapovalov played this past week in Auckland where he defeated fellow Canadian Vasek Pospisil, but then lost to eventual champion Ugo Humbert in the quarter-finals. Now playing in his first ever Grand Slam as one of the top-16 seeds, Shapovalov will be the higher seed until the fourth round where he could meet 20-time Grand Slam champion Roger Federer. But before that, the Canadian opens up with No. 66 Marton Fucsovics and could face the 2019 Next Generation ATP Finals winner Jannik Sinner in the second round. With just 315 points to defend until Miami, there's a strong possibility that Shapovalov makes his top-10 debut by March.

The youngest player in the ATP top-75, Felix Auger-Aliassime finished 2019 on a disappointing stretch, losing seven of nine matches from Montreal to the Davis Cup finals. But despite the poor finish, it was a historic season for the 19-year-old where he made an incredible three ATP finals. Achieving these results as a teenager, where the hype has surrounded him since he was just 15, is leading to believe that Auger-Aliassime will be a generational talent. Now playing with a new racquet in his second full year on the ATP tour, Auger-Aliassime's season got off to a rocky start at the ATP Cup winning just one of four matches, with all three of his losses coming to opponents ranked lower than him. The Montreal native was able to rebound strongly in Adelaide during his final tune-up heading into Melbourne, where he made his sixth career semi-final, narrowly losing in a nail-biting three-set match to Andrey Rublev (who is a perfect 8-0 to start the season). It was vast improvement from the ATP Cup to Adelaide and Canadian tennis fans are hoping he can ride that momentum into the Australian Open. Auger-Aliassime is seeded No. 20 in the draw and faces qualifier Ernests Gulbis in the opening round, a player whom the Canadian beat last year in Stuttgart. A projected third round encounter with the entertaining Gael Monfils will be on everyone's radar if the dominoes fall into place.

Milos Raonic had a stranglehold as the top Canadian for much of the last decade, but with Shapovalov and Auger-Aliassime now solidified among the best in the game and Raonic still dealing with injuries, that title has slipped to the next generation. The 29-year-old is coming off a season where he failed to make an ATP final and missed two Grand Slams due to injury, so there will be plenty of opportunities to gain points this season. He played only one official match leading up to the Australian Open, losing two tiebreak sets to eventual finalist Corentin Moutet in Doha. Now ranked No. 35 in the world, Raonic was the benefactor of three withdrawals, making him the final seeded player in the draw at No. 32. This means he won't have to play a seeded player until the third round at the earliest, so it prevents an encounter with a top player in the early rounds. Raonic opens up against No. 48 ranked Radu Albot, a player whom he has never faced despite both being on the ATP tour for almost a decade. His section of the draw includes the No. 6 seed Tsitsipas who has notoriously struggled against Canadians, going 2-5 against Shapovalov and Auger-Aliassime over the past two years.

Being gone from the game for eight months, there wasn't much expected from Vasek Pospisil when he returned from back surgery. The former top-30 player had a slow start in his first four tournaments, but got a career-defining win at the U.S. Open when he upset the No. 9 seed Karen Khachanov that seemed to spark the Canadian for the remainder of 2019. A deep run in Shanghai, back-to-back challenger titles and an incredible run at the Davis Cup finals meant Pospisil was back and there was much more to come in 2020. The Vernon, B.C. native played in Adelaide for his sole tuneup event leading into Melbourne, where he defeated No. 59 Joao Sousa, but then was defeated by Shapovalov in the second round. Pospisil had to use his protected ranking to get into the Australian Open main draw and opens his tournament against the big-serving Ivo Karlovic, whom the Canadian has won four of five career matches against. Monfils is projected to be his second round opponent and it's possible that an all-Canadian match-up with Auger-Aliassime could follow.

Leave it to Leylah

The lone Canadian woman in the singles draw, Leylah Fernandez won all three qualifying matches in straight sets to make her very first Grand Slam. The 17-year-old powerful lefty is beginning the difficult transition from juniors to the pros and so far it's been very successful. Going back to 2019, Fernandez made the junior final at the Australian Open and then won Roland Garros shortly after, so it was clear she was ready to make the jump. From there, the teenager from Laval, QC posted strong results in ITF tournaments and began 2020 with a dominant display against three opponents in qualifying that were all ahead of her in the WTA rankings. With Bianca Andreescu's withdrawal due to injury and Eugenie Bouchard's elimination in the final round of qualifying, all eyes will be on Fernandez as she looks to add her name to the impressive list of talented young Canadians. Inching closer to the WTA top-200 with her three wins, Fernandez will play No. 62 Lauren Davis in the opening round, which is a favourable draw considering most of the qualifying spots were slotted against more difficult opposition.