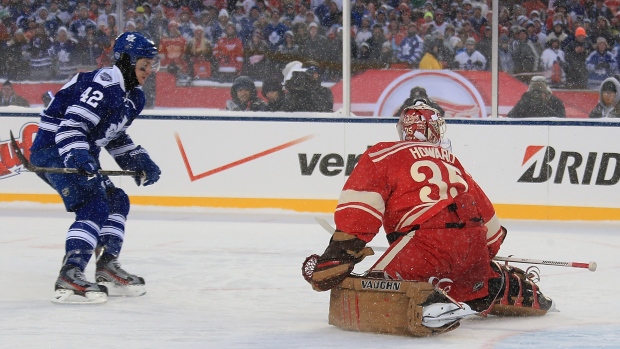 TSN Maple Leafs reporter Kristen Shilton checks in with news and notes from Maple Leafs practices and game-day skates. The Maple Leafs held a practice to BMO Field on Saturday.

- It’s not every day guys are lacing up their skates next to the likes of Doug Gilmour and Borje Salming while Dave Keon looks on, but that was a reality for the Maple Leafs as they prepared for practice. The franchise’s alumni team was present early and getting ready for their own game against the Detroit Red Wings on Saturday afternoon, and it was a special experience for Toronto’s young players to be sharing the dressing room with them. “It’s awesome, I’m a fan boy,” Toronto native Zach Hyman said. “I’m going around and getting my autographs [on a stick]. Sitting next to Darcy Tucker and Tie Domi, those are two guys when I was in my prime Leafs boy fandom, they were on the team. When you’re a kid watching them play, you don’t know them, you know them from how they play and that’s the way you remember them by but now you get to meet them and get to know them a little bit. It’s really special.” Hyman wasn’t alone as he traipsed around asking each alumnus to sign his stick – William Nylander, Mitch Marner and Auston Matthews, among others, did the same. Domi even asked Marner and Matthews to pose for a photo with them. It was worlds colliding, in the best possible way. “This has been the best part of the experience for me personally,” said Morgan Rielly. “Just being able to make conversation and chat with the alumni and have fun with it has been the best part for sure. Mike Babcock watched his team interacting with the legends of old and hopes it will inspire them in the position they’re in. “We have a lot of great players who came before these guys and we’re hoping to restore our franchise to its rightful place and we’re working on that,” Babcock said. “When you see these old guys, and the pride they have in the uniform, being a Leaf and how important it was to them, I think it’s a great message for our young guys.”

- Only five current Maple Leafs were with the club when they played their memorable Winter Classic game against the Red Wings in 2014. Those who were in Ann Arbour, Michigan remember how the blizzard-like weather made for more difficult conditions they’d rather not see again in Toronto. “That [outdoor] atmosphere was different, with the building and the weather – hopefully it will be a little better for us [tomorrow],” said Rielly. “The experience of it, just being able to enjoy it but also winning that game and getting the points was important.” It was Tyler Bozak who ultimately won the game for the Maple Leafs, in the shootout. No matter what else happens on Sunday, that’s the result Toronto wants to duplicate. “They’re always fun to play in,” said James van Riemsdyk, who has been part of four outdoor games. “But they’re a little more memorable when you’re able to get the win out of it. [In 2014] the whole day was cool with the snow falling and the atmosphere and that stuff was pretty cool. We have to realize still it’s a big game for us as we’re climbing the standings so we have to keep sight of that.” For most Maple Leafs, Sunday will be the first time they’ve ever skated outdoors in a game of any consequence. “I have a couple memories just from skating around, but never playing in an actual game like this,” said Auston Matthews, who skated outdoors while living in Michigan with the U.S. National Team Development Program. “It’s exciting to be out on the ice today, kind of get used to it, and then tomorrow come game time it’ll be pretty fun.”

- Although Sunday promises to be quite a spectacle, there’s a crucial two points at stake that the Maple Leafs need to keep moving up the standings. They’re presently riding a four-game winning streak, and while it’s technically their home ice at BMO Field, it’s the closest they’ve come to it since a loss at Air Canada Centre to the Anaheim Ducks on Dec. 19. “We’re feeling really good about ourselves now, we have a lot of confidence winning four games, two back-to-backs on the road, which is really good for the team after not winning [a back-to-back] all year,” Matthews said. “Right now we have to build off this momentum. It’s another game for us, another two points. Obviously the whole atmosphere of the outdoor game will definitely be more exciting but we definitely want the win.” Down this recent stretch Toronto hasn’t always been playing their best hockey, but they’ve been resilient and focused. “Sticking with what we’ve been doing, continuing to execute and being dialed into all the details,” said van Riemsdyk about how the Maple Leafs have differed lately. “We’ve been doing that and giving ourselves a chance to win.” Special teams have been especially prominent for the Maple Leafs – they’ve killed 19 straight penalties over their last four games alone. “We’re playing well, we’re playing hard,” Rielly said. “Our power play, our penalty kill have been great and we have to keep that going and continue to build off everything. We’ve been winning games but we have areas to improve on and we’ve talked about that are we’re trying to move forward.”

- While Babcock thinks his team is doing better without the puck, he has harped on them specifically about the number of man advantages they’ve been forced to kill. Too many are coming in the form of flagrant stick penalties. “Winning is a fine line,” Babcock said. “I’m not sure there’s much difference between what we were going through before we started winning here to what we’ve done. We’re taking way too many penalties in our last five games, we have to clean that up. Take care of our sticks way better and recover with our feet instead of reaching, but all in all, we’re in a good spot. We had a real good day yesterday and a special day today but now it’s time to get ready to play.” Babcock has coached in three previous outdoor games – at Wrigley Field and Michigan Stadium, both for the Red Wings – and isn’t concerned about the Maple Leafs getting too wound up before Sunday’s game. But he does worry about how they’ll tackle one particular hurdle. “When you get out there, do you try to do too much? That’s the biggest fear,” Babcock said. “If you do your own job, we have a chance to be great together. You start doing too much, we’re going to look bad together. Just do your own job, do it right, do your little part. Taking care of the puck will be my biggest concern tomorrow. Will we do too much?  So we’ll see how that goes.”

- As has been the case around the Maple Leafs all season, dissecting Matthews’ development is a popular talking point. Babcock professed Matthews would be a dominant centre by Christmas time and he’s been Toronto’s best offensive player on their recent win streak. “He’s good. Really good,” Babcock said when asked about his star player. “He wants to be great. He’s getting very good without the puck. He’s got to be way better in the faceoff circle. He will get better in that area. He’s just going to get better, he’s going to get quicker through the neutral zone, he’s going to play with more pace. He’s going to understand more He’s just going to get better. Saying that, doesn’t matter who you play him against, or the situation, you play him and he’s good. I looked after him a bit at the start, I don’t look after him anymore.”