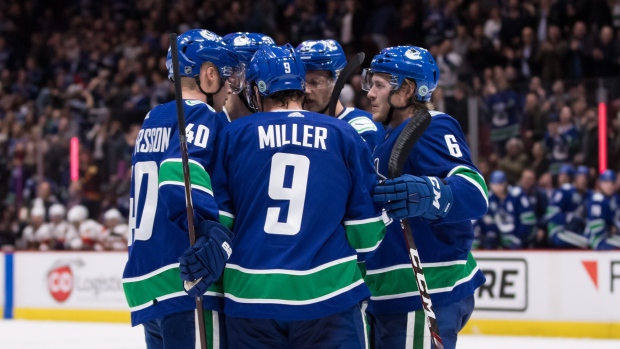 VANCOUVER — Canucks forward J.T. Miller only knew he was on the cusp of a major career milestone because his parents wouldn't let him forget.

"They've been putting pressure on me for about a week now so I told them to stop texting me," Miller said Monday night after he scored twice, leading the Canucks to a decisive 7-2 victory over the Florida Panthers.

His first goal of the evening was the 26-year-old's 100th in the NHL, but it wasn't a marker he'd been focused on.

"Honestly, you're so wrapped up in the game that you're not really paying attention," Miller said. "It's cool. Obviously I'm happy to do it. I've had a lot of help from other teammates along the way."

Traded to Vancouver from Tampa Bay last June, the versatile forward has concentrated instead on making his mark with the Canucks (7-3-1).

He came into training camp wanting to make a good impression and has excelled ever since.

Miller currently leads the team in goals and is second in points with six goals and seven assists.

"You've just got to do the things that you can control to the best of your ability and try to come in really good shape," he said. "Playing with good players and making good decisions on the ice, the results are there. They're not always there on the score sheet, but I think we're doing a lot of good things right now and the team's building a lot of confidence and I think that's really important."

Miller's line wasn't the only one firing for the Canucks on Monday. Every single forward who dressed for the team against Florida registered at least one point on the scoresheet.

"The first period was pretty good, scoring from everyone," said Canucks coach Travis Green. "I thought we played a really direct period. Sometimes that's mistaken for not being offensive, but I thought we supported the puck really well. We were on top of their defencemen in the first period, came out fast and hard."

Brian Boyle and Mike Hoffman replied with goals for Florida (5-3-4) in the first and second frame respectively.

There's a lot of confidence in the Canucks' locker room these days, Pettersson said.

"Winning is the best thing. And it doesn't come easy," he said. "Just because we started the season good doesn't mean we will go along. (We have to) work hard, stay humble."

The Canucks got on the board less than two minutes into the first period and kept up an offensive pressure that overwhelmed the Panthers for the much of the game.

Florida goalie Sam Montembeault temporarily got the hook just over six minutes into the game after he allowed three goals on nine shots.

Coming off a 6-2 win over the Edmonton Oilers on Sunday, the Panthers had hoped to give netminder Sergei Bobrovsky some rest during Monday's contest. But the veteran goaltender came on for Montembeault in the first period and had four saves in 13:42 minutes before the 22-year-old returned for the second frame.

"(I) just wanted to change the momentum of the game and see what happened and it worked for about, what, a couple minutes?" said Panthers coach Joel Quenneville.

Montembeault turned away a total of 26 shots on Monday.

Florida centreman Aleksander Barkov said he and his teammates went from playing their best game of the season on Sunday to their worst the following night.

Canucks goalie Thatcher Demko made his fourth start of the season and stopped 27-of-29 shots.

Vancouver wanted to show on Monday that the team had learned from mistakes made in its last game, Demko said. The Canucks were up 5-1 against the Washington Capitals on Friday but allowed the visitors to rally back and take a 6-5 shootout victory.

"Our main focus was not letting that one slip. We wanted to keep our foot on the gas and finish strong," he said.

Vancouver has now taken points from eight of its last nine games (7-1-1). But the squad knows they can't ease up, Demko said.

"We want to be a playoff team, we want to go deep in the playoffs," he said. "And it's just going to get harder as the season goes on. So just building that momentum now and riding it through the season."

The Canucks will now head off on a three-game road swing through California, starting with a contest against the L.A. Kings on Wednesday. The Panthers will face the Avalanche in Denver the same night.

NOTES: Pettersson registered his 80th point in his 82nd career game on Monday. Pavel Bure is the only player who required fewer games (80) to hit the same milestone with the Canucks. ... Left-winger Loui Eriksson returned to the Canucks lineup after being a healthy scratch nine games in a row and assisted on Schaller's first-period goal. ... Monday's loss snaps an eight-game point streak (4-0-4) for the Panthers.