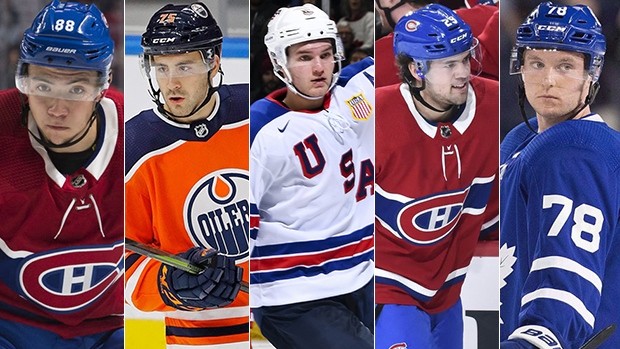 The first cuts have been made. Roster battles are beginning to come into clearer focus.

The annual National Hockey League rite of passage is upon us, when we begin tracking which prized prospects have an authentic chance to break camp with their club come October.

Scoop: Edmonton’s most glaring need on defence is a partner for Oscar Klefbom. That is Bouchard’s opening to earn a full-time spot on the roster. Bouchard broke camp with the Oil last year, scoring his first NHL goal in his seven-game audition. He earned the nickname “Old Man Bouchard” around town for his laid-back demeanour. He rarely seemed rattled on the ice. It was perhaps his relative lack of intensity or urgency that raised eyebrows at the World Junior Championship for Team Canada. Fellow Swedish import Joel Persson has gotten the bulk of the ice time with Klefbom to start camp, but Bouchard has plenty of opportunity in front of him.

Scoop: Norris, acquired from the Sharks one year ago in the Erik Karlsson trade, has been playing catch-up after missing the last eight months following shoulder surgery. He has caught up well, by all accounts, in his battle to win a job down the middle for the Sens. Norris didn’t collect a point in his preseason debut in St. John’s - where his dad, former NHLer Dwayne, is a member of the Newfoundland Hockey Hall of Fame. But new Sens coach D.J. Smith said the focus for Norris will be on his play without the puck, his attention to detail, and his ability to defend.

Scoop: Poehling’s candidacy to break camp with the Canadiens took a turn on Friday when the team announced that he was diagnosed with a concussion. He is out indefinitely after being boarded Florida’s Dryden Hunt on Wednesday night in Bathurst, N.B. Prior to that diagnosis, Poehling – who owns the NHL’s best goals per game ratio in history after his spine-tingling NHL debut with a hat trick in last season’s finale against the rival Maple Leafs – was certainly in the mix to force the Habs’ hand. Poehling toe-dragged Aaron Ekblad to set up a goal on Wednesday after that hit from Hunt, which was almost as impressive as his thought process on the sequence (see below). That is all on hold now, pending his recovery time.

Ryan Poehling caught my ear when I asked about his set up on the game winner. He knew there’d be no back pressure as he carried the puck into the zone. He knew the PP players were gassed because they’d been on the ice for awhile. Smart.

Scoop: With Travis Dermott set to miss as many as 14 games to start the season, there are two spots up for grabs on the Leafs’ blueline. The third pairing is wide open and Sandin is an authentic candidate. Sandin showed some versatility on Wednesday night for coach Mike Babcock – who loves balancing his pairs with lefties and righties – by playing on the right side as a lefty. Sandin’s confidence and swagger is apparent, carrying himself well in his second NHL camp after a strong AHL season with the Marlies. Battling with Ben Harpur, Martin Marincin, Jordan Schmaltz and Justin Holl, the tie in this case might go to a veteran – especially given the fact that Sandin can earn performance bonuses that might hurt the Leafs – but there is no question Sandin’s time is close to arriving. “All you got to do is watch him,” coach Mike Babcock told reporters on Friday. "He’s smart, he knows how to play, he’s got a feel. He’s one of these guys that it doesn’t seem to matter how old he is because his hockey sense is so good, he sees it. He’s a little guy who seems to know how to defend. He seems to know how to leverage his body. He just seems to be a good player. And the other thing about it is when you talk to him he doesn’t seem to get all uptight, he’s just, ‘Oh, okay, yeah,’ or knows what you’re going to say before you say it most of the time.”

Scoop: Suzuki would appear to be in the driver’s seat for a spot now following Poehling’s concussion diagnosis. He matched Poehling this week with a similarly impressive two-assist night on Thursday. Acquired from Vegas in the Max Pacioretty deal, Suzuki put a beautiful bow on his night with a patient flip over Sam Montembeault’s shoulder to start the shootout. What coach Claude Julien will appreciate more than the highlight reel is Suzuki’s furious first 60 seconds. He pushed the pace, set up Jordan Weal on the rush, and also drew a penalty. Suzuki has seen action on both special teams units this week. The Habs have 15 NHL contracts at forward, but Montréal may just have to make room. “If they’re not there,” Julien said this week of his two prospects pushing, “they’re knocking on the door.”