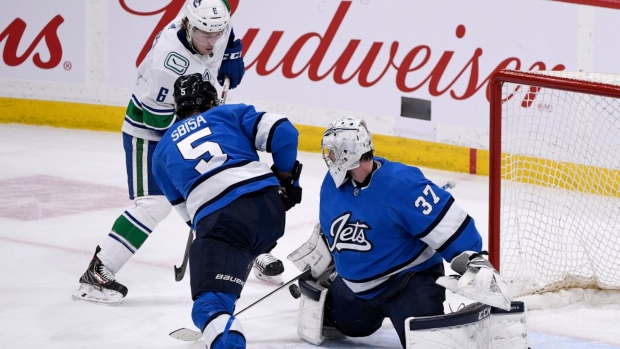 1) Boiled down to the basics, Tuesday's game was a tale of two first period breakaways. JT Miller walked in all alone on a Canucks power play with the team trailing 1-0 and was denied by Connor Hellebuyck. Later in the opening period with the game still 1-0 in Winnipeg's favour, Jack Roslovic got in behind Quinn Hughes and beat Jacob Markstrom cleanly on the glove side. What could have been a 1-1 game was instead 2-0 for the home team and despite the Canucks carrying the play for much of the night and generating a number of quality scoring chances, none was better than Miller's look that could have changed the complexion of the hockey game. That save by Hellebuyck was a sign of things to come as he was both spectacular at times and also a little fortunate stopping all 41 shots he faced in posting a 4-0 shutout.

2) Yes, the Jets have now defeated the Canucks in 10 straight games. And yes, Winnipeg has won the last nine meetings between the teams at Bell MTS Place. But more than the one-sided dominance of the head to head match-ups is the Canucks shocking -- and consistent -- inability to score goals in The Peg. It's as if there is a forcefield covering the Jets net. In their last eight trips to Winnipeg, the Canucks have managed just five goals. They have scored one goal on five separate occasions and been blanked now in the other three. Sure, the Aquilinis have legal control of Canucks Sports and Entertainment, but it sure seems like Connor Hellebuyck owns the Canucks. He's now 7-1 lifetime with a 1.48 GAA and a 95.0% save percentage against Vancouver. The teams meet again one more time this season on March 15th in Vancouver. Hellebuyck probably has that game circled on his calendar already.

3) There was no issue with the Canucks effort on Tuesday. Playing their third game in four nights and fourth game in six nights with travel between each contest, the Canucks reached the 40-shot mark for the first time since a 2-1 overtime loss in Anaheim on November 1st. Of their 41 shots against the Jets, 10 came on the power play. Elias Pettersson had five shots on 10 attempts throughout the game and was around the puck all night long. Brock Boeser and Jake Virtanen each had five shots as well. Pettersson hit a couple of posts and also missed a glorious chance in the first period with Hellebuyck down, and seemingly out, Pettersson fired the puck through the crease and out the far side of the Jets net. Boeser had a solid look at the left side of the net late in the first period and Hellebuyck stretched out to get his right pad on the puck. Bo Horvat was foiled on a two-on-one with Tyler Motte to open the third period and moments later the Canuck captain rattled a shot off the crossbar off a scramble from in front of the Jets net. At the end of their road trip in a hostile building, the Canucks controlled 62.5% of all even-strength shots and generated 19 scoring chances at evens. The players the Canucks wanted to get good looks, had good looks. Give Hellebuyck credit he was strong on Tuesday night. Overall, the Canucks played well, but it's a bottom-line business so it's hard to search for silver linings when the team was held without a goal.

4) At 2-0 through one period, the Canucks weren't in great shape, but they weren't out of the game by any stretch either. However, with 12 seconds left in the first, the Canucks needlessly iced the puck bringing up a face-off deep in Vancouver territory. Off the draw, Chris Tanev was pressured and his clearing attempt sailed over the glass and out of play. The Jets started the second period on the power play with fresh ice and 1:55 to work with the man-advantage. Just 1:12 into the period Blake Wheeler played the puck to the front of the Canucks net. With Kyle Connor setting up a screen, Jacob Markstrom didn't appear to see the puck which found its way through traffic and into the net for a 3-0 lead. It was the only special teams goal of the night and it essentially ended the game even though there was still 39 minutes to play. Remarkably, in Game 47 of their schedule, that marked the first time all season the Canucks had fallen behind 3-0 during the run of play. In the second game of the year in Calgary, the Flames built a 2-0 lead and with time running down sealed the victory into an empty net as they skated to a 3-0 victory. Tuesday was the first time the Canucks faced a 3-0 deficit with time still left on the clock. It was also the club's third shutout loss of the season after previous blankings in Calgary on October 5th and in New Jersey on October 20th.

5) It's easy to say Jacob Markstrom looked tired and that Travis Green should have gone with Thatcher Demko in the final game of the road trip instead of trotting Markstrom out for the third time in four games and the 15th time in the last 17 outings. Markstrom wasn't at his sharpest and was certainly the second best goalie on the ice on Tuesday, but when the team in front of him doesn't score, it's hard to lay a large amount of blame for the outcome at the skates of the netminder. Markstrom gives the Canucks a chance to win almost every night out and when asked about the starter's heavy workload after Tuesday's morning skate in Winnipeg, Travis Green pointed to the significance of the game with the Jets just two points back in the standings to start the day and with the Canucks having a chance to finish Tuesday night atop the Pacific Division. The coach wanted to stick with his winning line-up from the weekend and that included Jacob Markstrom who, like the team in front of him, was given Monday off after a busy and successful weekend. Going with Markstrom signalled to the rest of the team that the Canucks were icing their best line-up in an effort to put their Winnipeg woes behind them. Green also pointed to the fact that Markstrom had played less than two full periods in a six day span while the team was in Florida last week. When you run your goalie out there 15 times in 17 games, there are bound to be some nights when he's not as sharp as he'd like. That's a risk Travis Green was willing to take. There was nothing Markstrom could do on the first Jets goal off a face-off win. He was fortunate that a stinker that squeezed past him moments later was reviewed for offside and was overturned keeping the game 1-0 in the early going. The second goal was a breakaway, the third goal wasn't a great one (detailed above) and the Jets rounded out the scoring with an empty netter. With Markstrom heading to St. Louis for the All-Star weekend, the Canucks certainly have to mindful of his workload. They claim they have full confidence in Thatcher Demko and it's important that they prove that by getting him some work, too. It seems like Saturday at home against San Jose ahead of the break and then the first game out of the break at home against St. Louis might be games that should be earmarked for the back-up. Markstrom will take part in All-Star festivities on Friday the 24th and Saturday the 25th and then have to make the trek home from St. Louis on the 26th. Give Demko the start against the Sharks this Saturday the 16th and then again against the Blues on Monday the 27th. That would give Markstrom from the night of the 16th until the night of the 29th between league starts with only the All-Star duties to tend to during that time. That should keep him fresh for the stretch run out of the All-Star break.