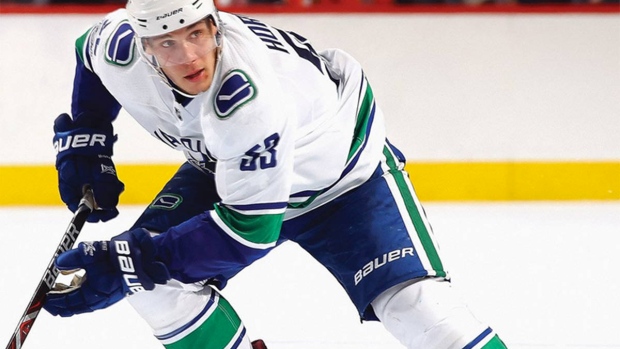 1) The Vancouver Canucks have talked all summer about being a better hockey club than they've been in years. On Thursday in St. Louis, they gave fans reason -- or perhaps reasons -- to believe that they may be true to their word. In recent seasons, giving the Stanley Cup champs a handful but coming up a goal short would have been viewed as some sort of moral victory in Vancouver. But at some point, the standards have to rise. And coming close but losing to the Blues on Thursday wouldn't have meant much in the grand scheme for a team trying to take the next step in its evolution. Instead of being satisfied with keeping things close against a robust St. Louis squad, the Canucks took matters into their hands and delivered an early season statement by rallying from a two-goal deficit to win 4-3 in a shootout. Recent wins over non-playoff teams like Los Angeles, Philadelphia and Detroit all certainly count in the standings. But successful NHL teams can't just feast on minnows. You have to take care of business against teams in your own weight class and then find a way to answer the challenge of the league's heavyweights on occasion. The Canucks earned two points with the win, but also proved a point or two by showing character, resolve, determination and a pluckiness that hasn't been seen on enough nights in recent years. Maybe, just maybe, we witnessed the Canucks take a big step in the right direction with their win over the Blues.

2) It's not often that the penalty kill wins a hockey game. Even rarer when it's in the second period and the team is trailing by a pair of goals. But without question, the turning point in Thursday's victory was the Canucks successful kill of a 5-on-3 for 1:20 midway through the middle frame with the Blues up 3-1 and looking to bury their visitors. The Canucks not only killed off both penalties (to Jake Virtanen and Tyler Motte), but that boost set the stage for the Canucks to start their comeback when Motte stepped out of the penalty box, raced away down left wing and rattled a shot off the post. JT Miller then swooped in and deposited the rebound behind Jordan Binnington and the Canuck comeback was on. The penalty kill has been incredible in the early going successfully defending 19 of 20 (95%) short-handed situations. Chris Tanev logged a team-high 5:09 with the Canucks a man-short on Thursday. Incredibly, that was 5:09 of the Blues 5:51 of power time.

3) No one on the Canucks needed a goal more than Bo Horvat and the captain came through in crunch time. Horvat scored his first goal of the season with 7:55 to go to tie the game at 3-3. Horvat crashed the St. Louis crease and poked the puck past a prone Binnington after Elias Pettersson had been robbed at the goal line by a desperation dive by Blues defenseman Colton Parayko. Horvat cruised in and deposited the loose puck in the back of the net as a Canucks power play expired. The goal was huge for the Canucks, but also for their newly appointed captain who admitted post-game that he was starting to wonder if he would ever score. Earlier in the game, he had two pucks in scoring positions skip over his stick adding to the torment of not having scored through the team's first five games. He was able to accept the slow offensive start because the team had won its previous three games. But Horvat knows his role and his worth to the Canucks and they needed their second-leading goal scorer from last season to get going. He entered the night without a goal since March 20th last season (13 games) and had just one road goal in his last 23 games as a visitor. He's too good to go that long without scoring. His last road goal was an overtime winner in Chicago last March. Good things generally happen for the Canucks when Bo Horvat is productive as was the case in St. Louis. In his first road game with the C on his jersey, Horvat helped the cause in a big way marking the occasion with his first goal of the season. And it couldn't have come at a better time.

4) Thursday's win was far from perfect. The Canucks managed to win despite going 0/5 on the power play. More than that, however, was the fact the team registered just one shot on goal in 7:11 of time with the man advantage. Sure, the power play struck three times against Detroit on Tuesday, but overall the Canucks power play still needs to find its groove. It's 4 for 24 (16.7%) on the season now and this was one area the team vowed to show marked improvement this season. Aside from ripping apart the Red Wings, that just hasn't happened. And the Canucks secured victory in St. Louis in spite of one of the most poorly executed 5-on-3 man advantages for a full two minutes and needing a goal to tie. Despite the summer dreams of Elias Pettersson on one side and Brock Boeser on the other, neither of those two has a power play goal six games into the season. And Pettersson just hasn't looked dangerous or comfortable yet with the man-advantage, although in his defense he did everything but score moments before the Horvat goal as time expired on the Blues penalties. The obvious change remains giving Quinn Hughes a look with the top unit. Travis Green could have earned a contract extension on the spot had he gone with Hughes and the team cashed in during that 5-on-3. That remains a card the coach has in his back pocket and you have to think Hughes will get a look there at some point soon. The Canucks can always go back to Edler, but it might be worth a look to mix things up and see if Hughes can breathe some life into a power play that needs to find its comfort zone. Sure, the Canucks won on Thursday, but it's hard to imagine them pulling out too many improbable victories without help from the power play.

5) The Canucks are officially on a roll. At least, they're on the first four game win streak since the team ended Green's first season behind the bench on a 5-0-2 run that included four straight victories. Elias Pettersson has never experienced such sustained success in his short time in the NHL. He enjoyed individual success on many levels last season, but team success was elusive. You could tell in the locker room after Thursday's win that the players are enjoying themselves. Winning is fun and the players are finding that out for themselves. Winning can also go a long way to getting full buy in from the players across the board. A guy like Troy Stecher certainly wants to play more than the 10:52 he logged on Thursday. But more than anything, Stecher wants to win. He's been a Canuck through three dark seasons and perhaps he and his teammates can now see the light. Stecher will likely get more opportunities when the inevitable injuries take a bite out of the team's blueline. But for now, it must be easier for role players to accept their roles knowing that even in limited minutes they are contributing to the greater good. And it has to be re-assuring to fans after enduring previous seasons and a variety of suspect defensive combinations to know that a player of Stecher's calibre is manning the team's third pairing. Now it's on to New Jersey and a shot at five straight -- something the Canucks haven't achieved since they won six in a row under Willie Desjardins nearly three years ago in January 2017.