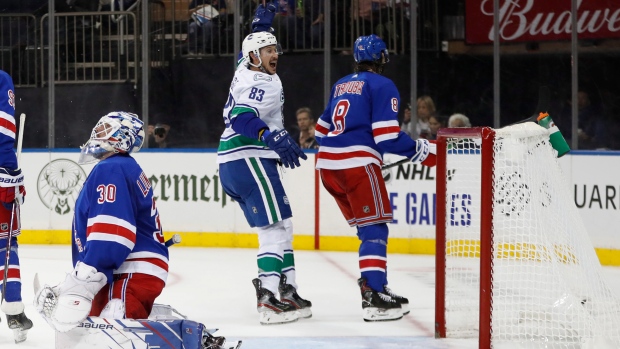 1) Jacob Markstrom was sensational for the Canucks -- even more so given the circumstances of the past week. After stepping aside for a personal leave, Markstrom made his first start in over a week and stopped 38 of 40 New York Ranger shots. He was brilliant in the third period where the Canucks were hanging on playing their second game in as many days. The Rangers dominated the final period outshooting the Canucks 17-6. But Markstrom was sharp and there as the last line of defense when his team needed him most. The Canucks are now eight games into their season and have yet to allow more than three goals in a game. Their defensive structure was not at its strongest on Sunday at Madison Square, but Markstrom was dialled in and was a huge part of carrying the Canucks across the finish line to victory. While Markstrom was terrific late in the game, it was key for him to be sharp early. Having dealt with family matters for the past week, Markstrom was likely to be questioned about his readiness had he struggled out of the gate. But to his credit he put forth a thoroughly professional performance on Sunday afternoon and you could hear in the voices of teammates how happy they were for their puck stopper. Markstrom got in an optional practice with the team on Friday and said after Sunday's game that he was back on the ice early Saturday well before the game against the Devils to see a few more pucks to prepare for the start against the Rangers.

2) Travis Green called Sunday Bo Horvat's best game of the season. The captain was not happy with the team getting shutout on Saturday in New Jersey and it showed with his performance in the opening 20 minutes at Madison Square. Horvat was all over the ice and the puck seemed to always be on his stick. Not only did he open the scoring -- the first time the Canucks have scored first on the road this season -- but Horvat had five shots on goal and won six of seven face-offs. His goal required a nifty kick from his skate up to his stick as he took a feed from Elias Pettersson in the slot and snapped the puck past Henrik Lundqvist. On the day, Horvat led the Canucks with seven shots -- all of his attempts hit the target -- he logged a healthy 20:56 on little rest and won 11 of 15 draws. With the chips down and the Canucks bending in the third period, Horvat logged 7:18 of ice to help the team preserve the one goal victory.

3) Brock Boeser entered Sunday's game tied with Tanner Pearson for the team lead with 23 shots through the first seven contests this season. However, Boeser had just one goal and a 4.3% shooting percentage. He's had lots of good looks including several in his wheelhouse with a wrist shot that has produced 29 and 26 goal seasons in his first two years in the league. Sunday in the Big Apple, Boeser looked like his former self ripping that potent wrist shot past Henrik Lundqvist to give the Canucks a 2-0 lead midway through the first. After a tenacious forecheck by Elias Pettersson forced the puck to Boeser at the top of the right circle, the Canucks sniper stepped into his shot and overpowered the Ranger legend between the pipes. 'When I get a puck like that, my eyes light up' Boeser said after the game. Boeser finished the game with three shots on seven attempts. He now has solo possession of the team lead with 26 shots on the season. More importantly he has his second goal in eight games -- and it came in a winning effort.

4) What a difference a day makes. After Saturday's slog through the muck in Newark, the Canucks and Rangers played a wildly entertaining game on Sunday. It's hard to compare the two contests they were so different. Where the Canucks managed just 24 shots and only 5 in the third period on Saturday against the Devils, the Canucks had 20 shots in the first period alone on Sunday afternoon as the two teams just went back and forth. The crowd at the Garden didn't have much to cheer about when the Canucks took a 3-0 lead on Jay Beagle's short-handed effort, but they stuck with their Rangers and roared to life as the home team chipped away. Still, the Canucks established a season-high for shots in a game by the end of the second period on Sunday with 37 and then added six more in the third. The shots finished 43-39 in Vancouver's favour and the shot attempts were 79-61 for the Canucks. So many games in today's NHL are suffocating that it was enjoyable to see two teams willing to trade chances.

5) The Canucks season a year ago was derailed by two terrible stretches of hockey. They had one win in 13 from late October through early December and then faded away down the stretch with a 4-10-3 slump that started in February and continued into early March. Good teams in the NHL find ways to reverse their fortunes and the best way to ensure lengthy losing streaks don't set in is to nip them in the bud. Losses will happen over the course of an 82-game season. Often the true measure of a hockey club is how it responds to those challenges. The Canucks had already dropped back to back games to start the season. They didn't want that to happen again Sunday afternoon. After a good win in St. Louis, they missed an opportunity to get something out of Saturday's close loss in New Jersey. Instead of letting one loss turn into a lost weekend, the team responded and found a way to grind out a victory in the back half of its first set of back to back games of the season. Instead of going into Detroit on Tuesday needing a win to salvage a road trip that started with such promise, now the Canucks have a chance to roll into Motown and come home with an impressive six of eight available points. Sunday's game was a swing game after a split of the opening two games of the trip. With some good play early and a bend but don't break third period, the Canucks have set themselves up to blow the doors off this four game road trip. They're in a stretch of nine of 12 away from home -- taking three of the first four would be an impressive way to start.