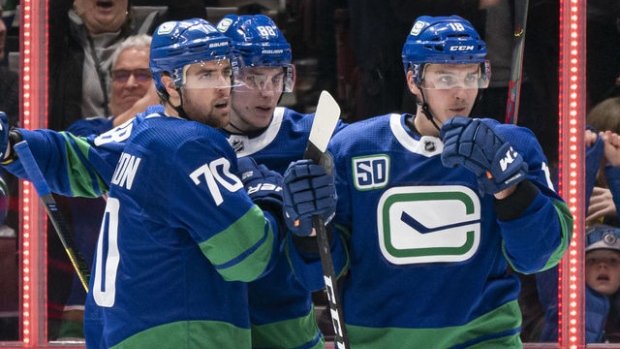 1) The Vancouver Canucks hit the All Star break in top spot in the Pacific Division after a 4-1 win over the San Jose Sharks on Saturday night. While it looked like a comfortable margin of victory, it was a scoreless game through 34 minutes and was a 1-0 contest through 45 minutes. While the Canucks dominated on the shot clock holding a 27-9 edge through two periods, they carried a slim 1-0 lead to the dressing room after the second thanks to a Loui Eriksson goal. It wasn't until Tanner Pearson cashed in on the power play 5:01 into the third that the Canucks had a little breathing room against the lifeless Sharks. Ultimately, the Canucks spread their scoring getting goals from Eriksson, Pearson, Quinn Hughes and JT Miller and produced the winner on the power play. The combination of spread scoring and power play contributions have carried the Canucks on many nights this season. On this night, they carried the team to the top of the division.

2) There are teams in the league that would love to have one power play unit they could rely on. The Canucks are in the enviable position of having two. And on Saturday night against the Sharks, the second power play unit was the star of the show. Tanner Pearson scored the team's 43rd goal of the season with the man-advantage and that goal proved to be the game winner. The 43 power play goals in 49 games matches the Canucks output in 82 games last season. The second unit (Pearson, Jake Virtanen, Antoine Roussel, Adam Gaudette and Tyler Myers) served notice in the second period that it was on its game when it pinned the Sharks -- the top penalty killing team in the NHL -- in its own end for the full two minutes of a Brenden Dillon high-sticking minor. On the night, the Canucks power play generated 10 shots on goal and the second unit accounted for seven of them led by Pearson with three.

3) Since his return to the line-up on December 23rd after missing 10 games with an upper body injury, Alex Edler seems to have found his sweet spot in terms of role and ice time. Edler had a huge night for the Canucks with three shots on eight attempts, four blocked shots and three hits including steamrolling Sharks forward Kevin Lebanc in the first period. And Edler did all of that in just 18:02 of ice time. Paired with Troy Stecher, he has returned from injury and has played more than 22 minutes in just two of 12 games. At this stage of the veteran blueliner's career less can be more. Edler isn't playing the power play and is being used only at even-strength and as a penalty killer. And with his measured minutes, he has taken just four minor penalties over the past dozen games -- and one of them was the roughing penalty and misconduct he picked up in a late game melee on Saturday. The Canucks are not overplaying Edler and he is responding with some of his best hockey of the season. The Canucks are 9-3 since his return to the action.

4) While he wasn't busy Saturday -- facing just seven shots over the first two periods -- Thatcher Demko was solid in backstopping the team to its eighth straight win on home ice. And it was an important opportunity for Demko who certainly wanted to his part to allow the team to continue its roll at Rogers Arena. The Canucks believe they have two goaltenders that can deliver victories and they have to use that to their advantage when the schedule starts up again after the All-Star break. Since team imploded in the third period of an 8-6 loss in Pittsburgh on November 27th, Demko has responded with wins in four of his five starts. That night in Pittsburgh could have scarred a young netminder still trying to find his way in the NHL. But Demko seems to have put that game behind him and has looked the part of a goalie that can not only give Jacob Markstrom much needed rest down the stretch but can be a guy who can get results. He's now 9-5-1 in his 15 starts this season.

5) Just as they did in recent wins in Buffalo and Minnesota, the Canucks responded rapidly to San Jose's goal snuffing out any sign of life the Sharks had. Just 37 seconds after Barclay Goodrow shoveled home a rebound off a scramble in front of Thatcher Demko, Quinn Hughes answered to extend the Canucks lead to 3-1 midway through the third period. The Canucks have shown a comfort level playing in close games for much of this season. Looking back at recent wins against Vegas,  Edmonton, Los Angeles, Chicago, New York Rangers and Buffalo -- all of those games were tied at some point in the third period. The Canucks managed to find a way to win all of them. Their only losses in the past 14 games were games in which the Canucks were not within striking distance in the third period (at Tampa Bay, at Florida and at Winnipeg). But in games that have hung in the balance recently, the Canucks have been exceptional in finding way to ensure they generated the offense necessary to get results. San Jose wasn't very good on Saturday, but at 1-0 heading to the third period and again at 2-1, they were just a shot away from tying things up. The Canucks ensured that did not happen by extending their leads on a couple of occasions and ultimately skating away to a three-goal victory.