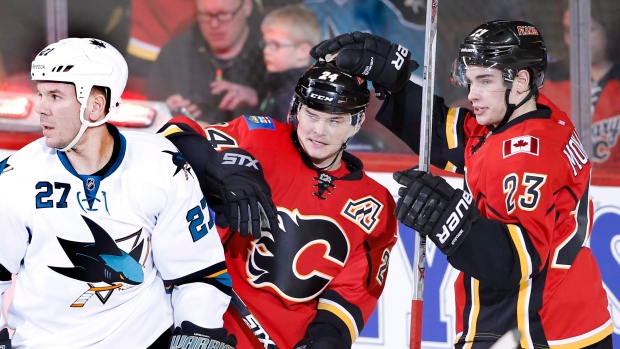 The Calgary Flames have made the most of Pacific Division contests in their efforts to maintain position in the Western Conference playoff picture.

That has been especially true against the San Jose Sharks.

With both teams coming off disheartening losses, the Flames play at San Jose on tonight looking to cap off a dominant season series against the Sharks.

Calgary (29-21-3) fell 4-0 to Pittsburgh on Friday after winning eight of its previous 10. Despite the defeat, the hot stretch has pushed the Flames into the second wild-card spot, and they're tied with Vancouver in points for the third automatic berth in the Pacific and two points behind San Jose (28-19-7) for the second.

"A good homestand," defenseman Mark Giordano said. "We did a lot of good things, put ourselves in a good position. We'll go on the road here and hopefully we'll pick up some much-needed points."

Jonas Hiller suffered through one of his worst starts of the season Friday, allowing four goals on 24 shots before being replaced by Karri Ramo in the third period. Prior to that, he had posted a 1.41 goals-against average and 4-1-0 record over his previous five starts.

One of those wins came Wednesday against San Jose. Hiller stopped 28 shots in a 3-1 victory, the Flames' third in four games against the Sharks this season going into the final matchup.

Jiri Hudler has four goals and an assist in the four meetings for the Flames.

San Jose followed the loss to Calgary by upping its record against division opponents to 16-4-1 with a 5-1 victory in Vancouver on Thursday, only to fall 5-4 at home to lowly Carolina on Saturday.

"We've got a stretch run here. We're going to need to win a lot of games to get into the playoffs. We've got some big games coming up."

The Sharks are 7-2-1 against teams that have reached the 70-point mark but 3-6-1 against the Hurricanes, Buffalo, Edmonton and Columbus - four of the worst clubs in the league.

Still, no team has caused more trouble for San Jose than the Flames. The Sharks are averaging 2.80 non-shootout goals but 1.75 against Calgary and their power play, among the best in the NHL with a 20.9 percent success rate, has scored on one of 10 opportunities in the season series.

San Jose's Antti Niemi has been inconsistent in his last four starts, allowing four goals in two of them - including Saturday's game - and a total of one in the other two. Backup Alex Stalock picked up the loss Wednesday.