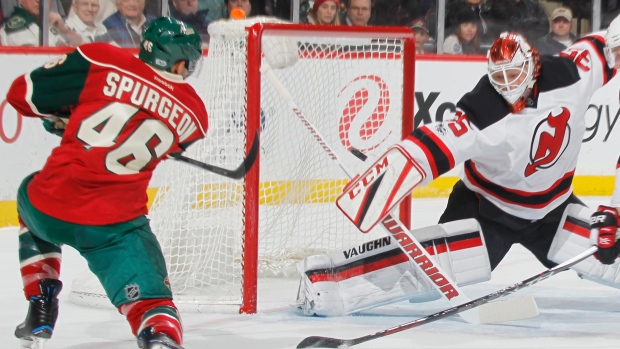 The Minnesota Wild know they're going to lose a good player in the Vegas expansion draft, with at least three key players exposed, general manager Chuck Fletcher is glad the Golden Knights can only take one.

“I guess the good news is we can only lose one player,” Fletcher said, per the Pioneer Press. “Sometimes at 3 a.m. when I wake up I remind myself of that and go back to sleep.”

The Wild are projected by TSN Hockey to choose the seven-three-one option in the expansion draft. The projected protected forwards are Zach Parise, Mikko Koivu, Jason Pominville, Charlie Coyle, Nino Niederreiter, Mikael Granlund and Eric Staal. That would leave Chris Stewart, Jason Zucker and Eric Haula all exposed to the Golden Knights. It's unclear at this point whether the Wild asked Pominville to waive his no-movement clause ahead of Monday's deadline.

On defence, the team is projected to protect Ryan Suter, Jonas Brodin and Matt Dumba, which would leave Jared Spurgeon and Marco Scandella available.

“It doesn’t take a very intelligent human being to understand our situation,” Fletcher said. “You look at the rules and the names, and we’re going to expose good players.

“It’s actually a compliment to our organization that we have so many tough decisions. We have a lot of really good hockey players and no matter what we do we’re going to have to expose five or six players that we wouldn’t want to expose and certainly have no desire to lose. That is the nature of the system.”

Fletcher admitted on Wednesday the team pretty much knows their plan for the expansion draft at this time. He said the Wild do not currently have a deal in place with the Golden Knights to protect any extra players, but could still make such a deal.

“We have a pretty good idea of what we would do if we had to put the list in right now,” he said. “Things can change. We have until Saturday at 4 o’clock and there’s no sense in putting the list in early. We might as well take all the time we can. Why make a decision when we can put it off until the last minute? That will be our motto for this process.”

One problem for the Wild in making a deal with the Golden Knights is their lack of draft picks. Minnesota is without a pick in the first two rounds of this year's draft and have already traded away their second-round pick in 2018.