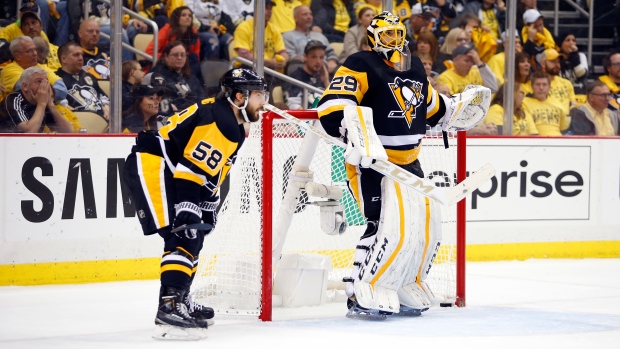 PITTSBURGH — Marc-Andre Fleury sat back in his stall in the ghost-town Penguins’ dressing room and barely blinked.

The questions came, but Fleury stared right through them. The look on his face was blank.

He looked like a man who knew he just flushed his golden ticket, his chance to re-stake claim in the Pittsburgh crease he’s owned since 2003 - if not for the last time in these playoffs, but maybe even the last time in his career.

“I should be better,” Fleury said.

On the back of the Nikita Kucherov, who scored his playoff-leading 10th and 11th goals of the postseason, the Tampa Bay Lightning erased a late third period deficit to hand the Penguins their first lost of the season (46-1) when leading after two periods.

The record book will show that the overtime winner bounced off Lightning forward Tyler Johnson’s backside just 53 seconds into the extra session.

But the lingering image was the shakiness Fleury displayed in the final two periods. Ryan Callahan nearly tied the game 34 seconds before Kucherov actually knotted it when he beat Fleury cleanly with a far-side shot from 34 feet away.

Callahan’s shot clanged off the right post and darted directly across the goal line before exiting the other side. Fleury wilted in the game’s biggest moments.

“We knew he hadn’t played in a while,” Kucherov said. “We saw he was a little struggling.”

Now, the Penguins are on the brink of elimination for the first time this spring. Game 5 marked the first time the Penguins lost consecutive games in the playoffs; they’d followed each one of their five previous losses with a win, a bounce-back mantra they'd lived by since Sullivan’s first week on the job.

Tampa Bay can punch their ticket to a second straight Stanley Cup final in Game 6 on Tuesday night at friendly Amalie Arena, where they have only lost a league-best twice in eight games this spring.

“I'm not going to assess his game right after the game,” Sullivan said, not exactly giving a ringing endorsement to Fleury. “It’s obviously a disheartening game we just lost. I'd rather digest it a little bit before I jump to any conclusions.”

How did we even get here?

Two games ago, the Penguins had a Shawn Michaels-strong chokehold on Tampa Bay. The talk was that this East final was shaping up to be a short series. The Lightning seemed to have few answers for how to counteract Pittsburgh’s speed and depth.

Two games later, the Lightning have a 3-2 edge in this best-of-seven despite not leading for a single second in Games 2, 3 or 5.

This has been the ultimate plot twist.

“That’s playoff hockey right there,” Lightning blueliner Victor Hedman said. “I think that’s the biggest lesson we get from last year: it’s always going to be a rollercoaster ride. It’s not going to be easy. It’s the toughest league and the toughest trophy to play for.”

Sullivan bet on Fleury for Game 5 after the 21-year-old Murray was pulled in Game 4 when he allowed four shots on 30 shots in a helpless assault in two periods.

Fleury, 31, hadn’t started in 53 days prior to Sunday night, since sustaining his second concussion of the season on March 31. He admitted he was rusty. He may have even been fatigued.

“A little bit,” Fleury said of the rust. “It wasn’t the best I’ve felt in a game, but I’ve still been practising a lot. I should be better. Especially on the first one. Tough to lose.”

The decision was a curious one in the sense that all Murray has done is win since being called up from the AHL earlier this season. Murray has 18 wins in 24 career NHL starts, including a 9-4 mark in the postseason with a .923 save percentage.

It almost felt like Sullivan was caught looking ahead to the Stanley Cup final, thinking Fleury might have been the man to get the Penguins over the top then with the 2009 Cup on his resume.

Instead, Fleury and the Penguins cracked in the absence of Trevor Daley. Kris Letang morphed from all-world defenceman to liability, on the ice for all four Lightning goals against as he tried to make up for missing the key cog Daley, who is out for the remainder of the playoffs with a fractured ankle.

Letang and captain Sidney Crosby combined to be on the ice for a staggering 42 Tampa Bay shot attempts, both carrying heavy negative numbers in the shots-against ratio.

“I wish it would have been a different outcome,” Fleury said. “It’s very disappointing.”