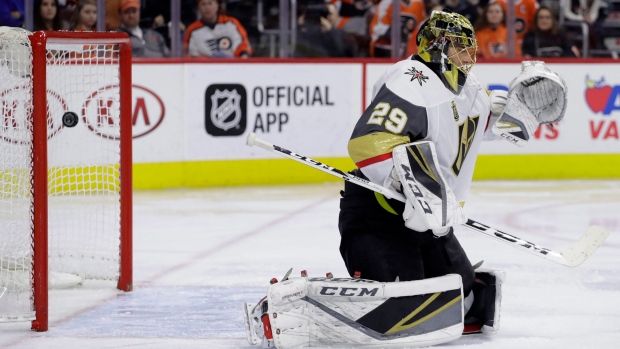 PHILADELPHIA — Marc-Andre Fleury has helped surprising Vegas by bringing a positive vibe and a contagious amount of confidence to the locker room. His play on the ice hasn't been too shabby, either.

Fleury made 38 saves to become the 13th goalie in NHL history with 400 career wins, and Ryan Carpenter scored the winning goal with 2:40 left to lead the Golden Knights over the Philadelphia Flyers 3-2 on Monday night.

Erik Haula and William Karlsson also scored for the Pacific Division leaders, who won their third straight and completed a 4-1 road trip.

Besides Fleury's on-ice resume, which includes three Stanley Cups, Gallant knew he was getting a strong leader at the beginning of the season.

"I heard his personality was unbelievable," Gallant said. "He's a better person than goaltender, and that says a lot."

Fleury's work on the ice against the Flyers was pretty special, too.

His best save came 4:20 into the third period when he robbed Travis Sanheim with a tremendous glove save on a wrist shot from the point.

The Vegas goalie was happy to join the calibre of players who have reached 400 wins, but downplayed the accomplishment — at least for now.

"Maybe I'll be more proud when I'm done," he said. "But I'm still playing and look forward to the next game."

Claude Giroux and Wayne Simmonds scored for the Flyers, who have lost six of seven. Philadelphia sits in third place in the Metropolitan Division with 81 points, two in front of Columbus and three ahead of New Jersey.

"Got to flush it out and move forward," Flyers coach Dave Hakstol said.

The Golden Knights were playing their first game since setting a record for road wins by an expansion team with Saturday's 2-1 shootout victory at Buffalo. Vegas improved to 21-12-3 on the road and 45-19-5 overall.

Carpenter netted the game-winner after strong work along the boards by Cody Eakin and Pierre-Edouard Bellemare, both of whom got assists. Eakin got the puck to Carpenter, who fired a wrist shot from left of the post past Petr Mrazek's glove side.

Karlsson put the Golden Knights ahead 2-1 six minutes into the third period with their second power-play goal. Mrazek made a pad save on Shea Theodore's deflection, but the puck went right to Karlsson and he fired into the open net for his team-leading 36th goal. Jonathan Marchessault picked up an assist, upping his team-best total to 66 points.

Philadelphia answered 1:06 later with its own power-play goal to tie it. Simmonds took a cross-ice pass from Jakub Voracek and shot high over Fleury's right shoulder.

Haula opened the scoring with 13:43 left in the first when his shot from a sharp angle to the right of the net went off Mrazek's stick and in.

Grioux tied it 1:27 into the second period when his wrist shot from the slot beat Fleury on the glove side. It extended the captain's point streak to seven games (three goals, five assists) while increasing his season total to 82 points.

The Flyers dominated the second period, outshooting Vegas 16-8, but managed just one goal due in large part to Fleury. The veteran goaltender made two stellar saves, using his glove to deny Voracek with 8:38 remaining and closing his pads to stop Oskar Lindblom's attempt from close range with 3:05 left in the period.

"He's been playing phenomenal and making huge saves when we need it," Vegas defenceman Deryk Engelland said. "He's been doing that all season."

NOTES: Philadelphia G Brian Elliott skated following the team's morning skate for the first time since having surgery on Feb. 13 for a core muscle injury. Elliott is expected to miss up to two more weeks. ... Flyers defencemen Robert Hagg (lower body) and Johnny Oduya (upper body) sat out. Hagg is out two weeks, and Oduya is day-to-day. ... Voracek increased his assist total to 59. He entered play tied for the NHL lead with 58. ... The teams split the two-game season series. The Flyers won 4-1 at Las Vegas on Feb. 11.