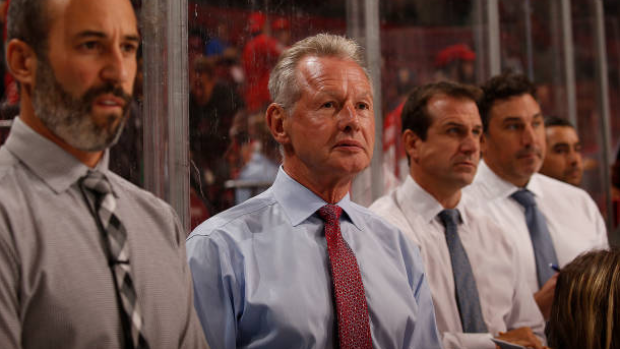 The Florida Panthers have parted ways with veteran assistant coach Mike Kitchen after he allegedly kicked a Panthers player on the bench during a game this season, multiple sources have told TSN.

Kitchen did not immediately respond to a request for comment. The Panthers said in a news release on Tuesday evening only that "Mike Kitchen will not return as assistant coach," and declined to offer further comment, citing company policy on personnel matters.

A National Hockey League official confirmed the league has been apprised of an internal investigation by the Panthers.

According to sources, the alleged incident occurred in the third period of Florida’s win in Minnesota on Jan. 20. A Panthers player threw a water bottle on the bench in frustration, dousing Kitchen, who allegedly kicked the player in response.

One source described Kitchen’s kick as “full on,” saying he “reared back and booted [him] in the lower back in anger,” as a result of being soaked.

“This certainly wasn’t a friendly tap of encouragement,” the source said. “There’s no place for anything like that in the game.”

Tallon was not present at the game, a source said, but no disciplinary action was taken when Tallon rejoined the team the following day in Chicago, ahead of Quenneville’s first game back coaching against the Blackhawks.

That next night was also Kitchen’s first game back in Chicago after helping the Blackhawks to two Stanley Cups in 2013 and 2015 as Quenneville’s top lieutenant.

Kitchen, 64, has been on or behind an NHL bench for more than 3,000 games as a player, assistant coach and head coach – almost consecutively since 1990, including 27 of the last 29 seasons. He has coached the Maple Leafs, Blues, Blackhawks and was on his second stint in South Florida.

Kitchen replaced Quenneville as the Blues’ head coach for parts of three seasons (2004-2006), compiling a 38-70-4-19 record. The two later joined forces again in Chicago, before reuniting in Florida last summer.

After the alleged incident, Kitchen was permitted to continue coaching without apparent punishment through to the NHL pause March 13 as a result of the COVID-19 pandemic.

Kitchen then opted out from participating in Florida’s qualifying-round series against the New York Islanders in the Toronto bubble in August.

At the time, Kitchen said in a statement that not participating was a “difficult decision to say the least, but the right decision for me and my family.” The Panthers said then they “fully support this decision."

Quenneville recently told reporters that he expected his entire coaching staff to return for the 2021 season, saying Kitchen was involved in coaching when the Panthers returned home from the bubble.

"I know Kitch, and in a lot of ways, I know exactly what makes him work and I think we've got a great working relationship," Quenneville told reporters.

Tallon and the Panthers “mutually agreed to part ways,” according to the team, after his contract was not renewed following Florida’s loss to the Islanders in early August.

Soon after his departure, Tallon was reportedly under investigation by the NHL for allegedly using racist language inside the Toronto bubble in August, according to a report from FloridaHockeyNow.com. Tallon has denied the allegations.

This is the second allegation of in-game physical abuse of an NHL player by a coach to surface within a calendar year. Former Carolina Hurricanes defenceman Michal Jordan told TSN on Nov. 27, 2019 that head coach Bill Peters also forcefully kicked him in the back during a game.

Peters remains under investigation by the NHL following his resignation in Calgary after former player Akim Aliu said Peters repeatedly used racial epithets in his presence in the AHL during the 2009-10 season.