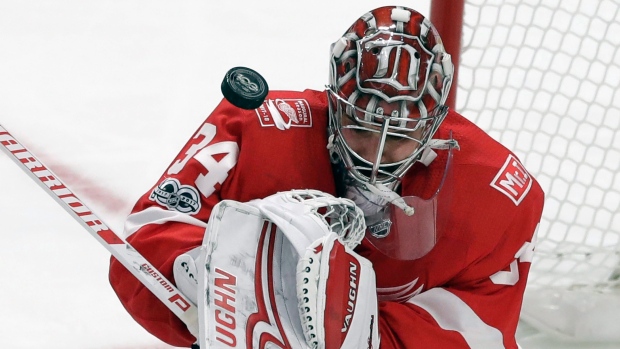 Closer to first place in the rollercoaster Metropolitan Division than outside the Stanley Cup playoff picture, Philadelphia Flyers GM Ron Hextall felt he owed it to his team to bring in a proven NHL netminder.

The move came one day after backup Michal Neuvirth went down at Madison Square Garden with starter Brian Elliott already sidelined until mid-March. Hextall said it would be “a lot to ask” for inexperienced netminder Alex Lyon to carry the load.

Mrazek was the highest-ranked goaltender on TSN’s Trade Bait board. He is expected to be available to start against the Montreal Canadiens on Tuesday night (7 p.m. ET, TSN2).

“This is a sign that our players have done a really good job,” Hextall said in a conference call. “Our players have worked hard for a long time now, and I didn’t feel like it was fair to not have a proven NHL goaltender for this team. That’s the reason we acted.”

The Red Wings are guaranteed at least a fourth-round pick in the deal. It becomes a third rounder if Mrazek wins five regular-season games and the Flyers make the playoffs; that pick can also jump to a second-round pick if the Flyers reach the conference final and Mrazek wins six playoff games.

The additional pick only conveys to Detroit in 2019 if the Flyers re-sign Mrazek. Detroit also retained half of the pro-rated amount remaining on Mrazek’s $4-million salary.

“I think it’s a fair and reasonable deal for both sides,” Hextall said. “If Petr performs, we pay more, Detroit gets more. If he doesn’t, they still get paid and it costs us a certain amount, but it’s not overpaid.”

For the Red Wings, who weren’t planning to issue Mrazek a qualifying offer at $4 million, it was time to move on. They were able to pry assets away from possibly the last playoff-bound team in the market for a goaltender.

For the Flyers, it is a low-risk, high-reward proposition. Mrazek, 26, is just a little older than Lyon, the inexperienced goalie the Flyers didn’t want to throw into the fire.

For a time, Mrazek was one of the rising stars in net in the NHL. He posted a .920 save percentage in his first 100 appearances, all before the age of 24. The last season and a half has been difficult, but that may also be a symptom of the play in front of him, coinciding with Detroit’s slide in the standings after a 25-year playoff run.

If Mrazek lights it up in the NHL’s goalie graveyard, the Flyers will have the opportunity to qualify and keep him. Or, they could work out a deal for less, much in the same way they did with Steve Mason in 2013.

Most importantly, Mrazek has playoff experience. Elliott has a lot of work to do to recover from core muscle surgery. The oft-injured Neuvirth will be out “weeks,” according to Hextall. And Mrazek’s playoff numbers (.931 save percentage in 10 starts) are significantly better than Elliott's postseason numbers.

The Flyers made a small bet. It’s up to Mrazek to deliver the payoff – for his future, the Flyers, and even the Red Wings.

“He was the available guy that really intrigued us,” Hextall said. “We know how capable he is … He’s played extremely well over the last month. I think he’s had some really good times in his career where he’s been a very good goalie and he can be a difference maker.”