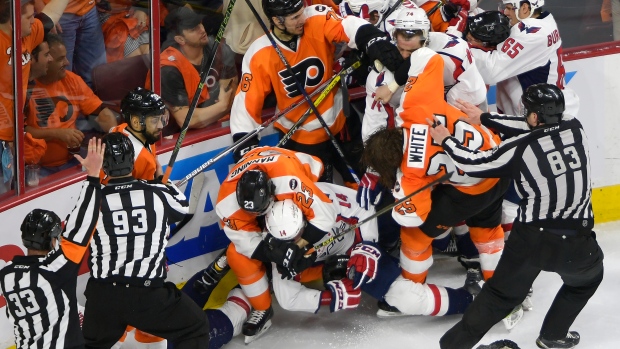 PHILADELPHIA - The Philadelphia Flyers want to keep wrist shots on the ice and not from fans in the stands.

The Flyers on Tuesday condemned disgruntled fans who threw promotional light-up bracelets and trashed the ice during a playoff game against the Washington Capitals on Monday night.

The wristbands were used as part of a pregame lights show. Fans started tossing them onto the ice in the third period as Washington turned the game into a rout, eventually winning 6-1 to take a 3-0 series lead.

"Fans have the right to voice their displeasure vocally or by not watching or attending games, but when displeasure is expressed in a way that embarrasses or endangers others, it cannot be condoned or tolerated," the team said.

There won't be a repeat.

The Flyers said there were never any plans to issue bracelets again before Game 4 on Wednesday night.

Well, Flyers fans certainly didn't want to see Mason allow five power-play goals, including four in the third period. Mason's play has been almost as unsettling for the Flyers as the unruly behaviour at the Wells Fargo Center. Mason was ridiculed around Philly for allowing Jason Chimera's 101-foot tip-in for a goal in Game 2. The Capitals lead a series 3-0 for the first time in a best-of-seven series in franchise history.

So which disgruntled fans heaved the bracelets?

The Flyers tweeted at fans Tuesday, "Please be sure to take only your bracelet as it is programmed to that particular seat."

The interactive LED wristbands were activated en masse during a glitzy pregame show on the same night the team honoured Ed Snider. Snider, the team founder, owner and chairman, died last week after a two-year battle with cancer.

"My dad would've called the wristband throwers a 'disgrace' & may have spoken publicly. But he wouldn't look back, only forward," Snider's daughter, Sarena, tweeted.

Flyers public address announcer Lou Nolan demanded fans "show some class" and warned the Flyers would be hit with a penalty if they kept littering the ice with bracelets and other garbage.

Sure enough, the wristbands kept coming, and the Flyers were whistled for a bench minor for delay of game. Nolan said, "way to go," and the fans cheered as if they were proud of the penalty.

"I think we can't lose sight of the fact that there were very few of those to come down compared to what there were in the building," general manager Ron Hextall said. "We've got great fans. Obviously, for a select few, some frustrations boiled over."

The Capitals gave out similar wristbands before Game 1. Other teams, including the New York Rangers, have run the same promotion in the post-season.

"I thought it was just a little bit uncalled for," Capitals coach Barry Trotz said. "And it got dangerous for not only our players but also for the Flyer players. You look at those bracelets, they're white, the ice is white. All you need is Claude Giroux to step on one and snap his leg in half or one of our guys."

Perhaps rattled by the bad publicity, the Flyers declined to reveal their Game 4 giveaway.

Saint Joseph's coach Phil Martelli made light last week of some of Philadelphia's more infamous sports moments when he was named the city's college coach of the year over Jay Wright. Wright led Villanova to a national championship.

"Threw snowballs at Santa Claus; threw batteries at J.D. Drew; cheered when Michael Irvin got a concussion. And did not give Jay Wright the coach of the year the year he won the national championship," Martelli said.

He can add this black eye to the list.