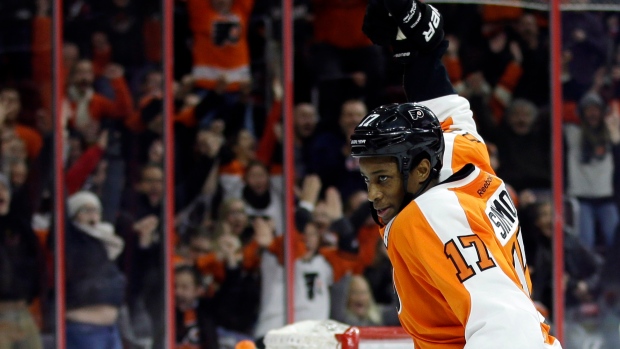 Brayden Schenn, Mark Streit, Wayne Simmonds and Braydon Coburn all scored for Philadelphia in a 4-2 win over the Columbus Blue Jackets on Saturday night.

Jakub Voracek and Claude Giroux both had two assists for the Flyers, who hadn't won since Nov. 8. Voracek improved his NHL-leading points total to 29. Giroux notched his 400th NHL point with his first assist.

Mason stopped 20 shots for the win.

"We seemed like we swarmed them," he said. "They might have been tired because they played (Friday) night, but it seemed like our guys really took it to them."

Boone Jenner and Matt Calvert scored for the Blue Jackets, who have lost three games in a row. Sergei Bobrovsky stopped 33 shots against his former team. He got the start despite playing through a seven-round shootout loss at Boston on Friday.

"We weren't able to execute passes, simple passes," Columbus coach Todd Richards said. "The focus part — some guys were engaged in the game. Our defencemen had to be, because when you're going back on pucks and getting fore-checked, you have to be.

"Our goalie had to be into it. We didn't have enough guys up front that were engaged in the game."

After the game, the Flyers referenced general manager Ron Hextall's stern message to them following Wednesday's loss to the New York Rangers as a turning point. Simmonds said he and his teammates thought about Hextall's words on the train ride back to Philadelphia that night.

However, they lost the following night at home to Minnesota after former stars Eric Lindros and John LeClair were inducted into the team's Hall of Fame.

"Any time your GM calls out every single player on the team, it's going to light a fire under your butt," Simmonds said. "We had a good response."

Philadelphia had allowed the first goal each game during its skid. The Flyers reversed that trend against Columbus.

While screening Bobrovsky, Schenn redirected Voracek's shot past the out-of-position goalie for the game's first goal, 2:37 in. Voracek earned his first assist on the goal.

Streit put in the rebound of his own shot at 5:05 of the first, giving the Flyers a 2-1 lead. Giroux, who won 23 of 28 faceoffs, earned his milestone assist on the goal.

"We can't take time off like that in the middle of the game," Calvert said. "It sounds like a broken record, but we have to play a full 60 minutes every single night."

Late in the second period, Simmonds snared a flying puck, dropped it at his skates and smacked it past Bobrovsky for a power-play goal. Simmonds had scored only once in his previous seven games.

Columbus got within 3-2 on a wrist shot by Calvert at 17:54 of the third period, but Coburn answered 48 seconds later to make it a two-goal lead again.

"We're going to give up goals," Berube said. "People are going to get goals. It's how you respond to them."

NOTES: The Flyers will play seven of their next eight games on the road. ... Berube had seven healthy defencemen for the first time all season, so he dressed all of them against Columbus. ... Jenner's tally gave the Blue Jackets 18 power-play goals. They rank second in the league.