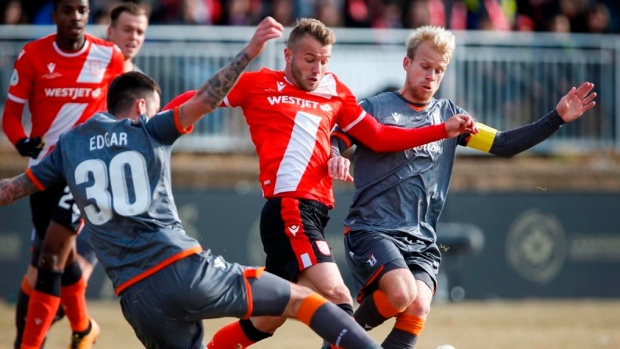 When David Edgar and his Forge FC teammates left Oct. 20 for El Salvador, the first step on their CONCACAF League journey, it was an open-ended itinerary.

Two wins and a loss later, the Canadian Premier League champions have added stamps in their passports from Panama, the Dominican Republic and now Honduras.

Forge takes on CD Marathon on Tuesday in the Honduran capital of Tegucigalpa in a Scotiabank CONCACAF League play-in game that guarantees the winner a berth in the CONCACAF Champions League, the confederation's elite club competition.

"It's been some journey," said the 33-year-old Edgar, a lanky centre back who is playing his last game before retirement.

"There's a big book to be written on this whole journey, when it's all over," added Forge head coach Bobby Smyrniotis.

"I think we're (currently) two weeks away from home and I've lost count of days, of where we are and where we're travelling," he added. "So I commend my players and my staff for all the hard work that they've put into this. It takes sacrifice for everyone to be away from home."

Forge had to keep winning to extend its Central American adventure.

A loss to CD Municipal Limeno in their preliminary-round game Oct. 22 and the Canadian Premier League champions would have headed straight home. A win and their travels around Central America continued.

Edgar, who has been around the soccer block, had stayed at the same hotel and played at the same stadium while on national team duty in El Salvador. But it was all new to some teammates as the team left Canada for the capital of San Salvador via Mexico City.

"You're flying in there, a lot of the boys, with the unknown," said Edgar. "You're also flying in there not knowing whether you're going for three days or two weeks."

For Edgar, that meant packing for two weeks.

Not that packing is hard when you're part of a soccer team.

"It's fairly easy," he said. "You've got your track suit, your shorts, your T-shirts. And we've got the best kitman in the league (equipment manager Joe Hanley) so he makes sure our laundry is done when we need it."

A soccer team on tour tends to spend much of the time in its hotel other than training or playing. Especially these days.

"But the places we've been too have been very very well quarantined, I guess you could say. Well looked after, very hygienic. They're taking the pandemic very serious in this part of the world. We've been following the rules. There hasn't been much stepping out at all."

The team spent just two days in San Salvador, with Edgar saying the facilities "were what we needed to get the job done and move on to Panama."

Ten-man Forge downed Limeno 2-1 thanks to an 83rd-minute goal by substitute Anthony Novak, setting up a trip to Panama for a Nov. 3 round-of-16 game against Tauro FC in Panama City.

The team hotel there, complete with rooftop pool and treatment room, overlooked the Gulf of Panama.

"A beautiful hotel … It had everything we needed," said Edgar. "Panama was beautiful."

The hotel also had a Greek coffee shop. "So the coaching staff loved that," said Edgar, referencing Smyrniotis.

The team trained in the heat on artificial turf at a local team's facility.

"It was a long time but the boys are used to each other," added Edgar, whose team spent some six weeks in a Charlottetown bubble en route to winning the Island Games on Sept. 19.

As a veteran, Edgar is happy chatting with roommate Kyle Bekker and fellow veteran Maxim Tissot, both longtime friends. He has also spent a lot of time reading, given he's preparing for life after playing by taking coaching courses.

"The boys like their games,": said Edgar. "They bring their (gaming) systems."

Another 2-1 win, this time on the back of Daniel Krutzen's stoppage-time penalty, and the Forge travelling party headed home where players and staff served their 14-day quarantine ahead of a Dec. 1 quarterfinal in the Dominican Republic against Haiti's Arcahaie FC.

For Edgar, it was precious time with his wife and daughters aged two and seven. Even if it was in a new house, with some unpacking to do.

"Which is part and parcel of what we've been doing. It's been here, there and everywhere," he said.

He worked out in the garage and in front of TV during team Zoom sessions.

"Nothing can replicate being on the field and that quarantine is hard," he said. "It's hard for everyone. But when you know you have an important game coming up, you're itching to get back on the field."

The team then flew south to the Dominican Republic, taking up residence in Punta Cana on Nov. 21 before making the 170-kilometre trip to the capital of Santo Domingo the day before facing Arcahaie.

Arriving early in the Dominican proved to be good call. It snowed in Hamilton and lockdown restrictions tightened.

Still it was more time away from home.

"It is a grind. It's a tough ask. But the one thing about this group is you just put things in front of them and they'll do the right thing," said Edgar.

"We just have to go day by day," added midfielder David Choiniere.

On the plus side, they stayed in a nice oceanside resort in Punta Cana with an adjacent grass training field. Edgar even managed to get nine holes of golf in.

He was surprised at the subsequent bustle and hustle of Santo Domingo, noting it took them an hour and 15 minutes to make the six-kilometre trip to training. Their hotel, however, was tucked away.

"Nothing to complain about," he said of the team hotels during its travels. "My time at Forge, we've always been well looked after. The CPL has done wonders in looking after the teams in the (Island Games) bubble and helping us here."

Tied 1-1 after regulation time, the game against Arcahaie went to a penalty shootout that the Haitians won 4-2 to book their 2021 Champions League ticket. That set up Forge's showdown with Marathon, beaten by Costa Rica's Deportivo Saprissa in another quarterfinal.

Originally slated to run from July to November, the CONCACAF League was postponed due to the pandemic. The competition, which eventually started in October, is scheduled to run through Jan. 28.

Edgar says the experience of playing in Central America will benefit the Forge players for years to come.

"It creates a resilience, … You'll remember these moments," he said.

"I'm telling them every day — soak it in, savour it," he added. "Literally it is my last game on Tuesday. So savour these things, remember them. Because they're going to hold you in good stead for the future.

"Football, it's got a cruel way of levelling itself out. As a group we've done everything to a professional standard and to a high standard. (Losing to Arcahaie) was hard. It was hard to take. But we know how to dust ourselves off and we know how to put the work in. That's what we've been doing."

This report by The Canadian Press was first published Dec. 8, 2020