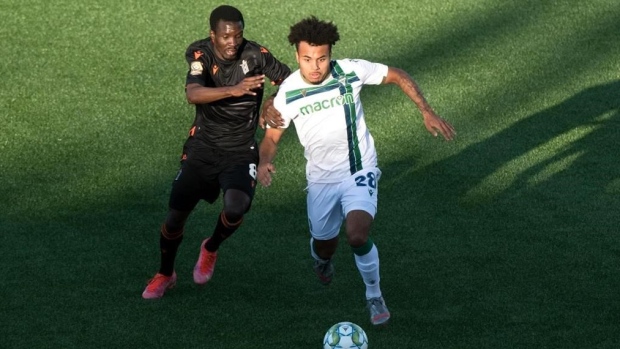 HAMILTON — No strangers to playing Scotiabank CONCACAF League games on the road, Forge FC hopes to put that experience to good use next week in Panama.

"We created opportunities, we created sequences," said Forge coach Bobby Smyrniotis. "We just needed that one to get in the back of the net.

"But we've seen a lot of good things today and we're confident going into the next one."

Forge will rue a missed penalty after defender Francisco Vence was called in the 39th minute for handball in the Independiente penalty box, with the ball making contact with his arm as he attempted a sliding tackle on David Choiniere after the Forge midfielder tried to jink his way past. But goalkeeper Cesar Samudio dove the right way and got a hand to Daniel Krutzen's penalty kick.

Forge pushed for a goal in the second half but could not breach the Independiente defence.

The return leg is Sept. 28 at Estadio Rod Carew in Panama City. Forge will have to play without star attacking midfielder Tristan Borges who picked up his second yellow card of the competition in the 31st minute.

Independiente, whose full name is Club Atletico Independiente de La Chorrera, knocked Toronto FC out of the 2019 Scotiabank CONCACAF Champions League with a 5-1 aggregate triumph in the round of 16.

The CONCACAF League is a feeder tournament that will send six clubs to the Champions League, the flagship club competition in the region that covers North and Central America and the Caribbean.

Forge has been the tournament’s road warriors, with pandemic-related travel restrictions forcing it on the road the last 18 months. Eight of its 10 CONCACAF League games have been played away from home, including the last seven — three in El Salvador, two in Honduras and single games in Panama and the Dominican Republic.

"That's built character in the team," Smyrniotis said of Forge's travels. "And I feel that gives us a lot of confidence going into this next match. We know the importance of goals. We also know we're a team that doesn't go two games without scoring a goal. And we've gone into various countries in Central American and scored goals."

Forge defeated El Salvador’s CD FAS 5-3 on aggregate in the preliminary round last month, with both legs played in San Salvador.

Independiente, which skipped the preliminary round, had a bye to the round of 16 after qualifying as the 2020 Clausura champions with the best aggregate record in Panamanian football.

Helped by the fact that the Panama side is fully vaccinated, Forge was able to welcome Independiente this time.

Dressed in dark blue and black, the visitors looked dangerous from the get-go. Forge got an assist from the linesman's flag when a fourth-minute Independiente goal off a free kick was called back for offside.

Forger 'keeper Triston Henry had to make an 11th-minute diving save off Guido Rouse's shot from just outside the penalty box after a Forge player slipped and lost possession of the ball. Henry needed some treatment after the ensuing corner, suffering a facial cut from a clash of heads with Krutzen.

Henry needed a new jersey and a plaster above his eye to continue. In the 21st minute, he used his body to block another Independiente shot on target.

Forge, third in the CPL at 9-7-1, was coming off a 2-1 win over Valour FC on Sept. 15 in the quarterfinals of the Canadian Championship.

Forge made it to the CONCACAF League quarterfinals last year, beaten by Haiti’s Arcahaie FC in a losing in a penalty shootout. It then lost 1-0 to Honduras’ CD Marathon in a play-in match, which represented one final chance to qualify for the Champions League.

In 2019, Forge lost to Honduras’ Olimpia in the round of 16 in the feeder tournament.

The Hamilton side was without defenders Maxime Tissot and Dejan Jakovic and forward Omar Browne, a former Independiente player. Forge started eight Canadians against the all-Panamanian side.

This report by The Canadian Press was first published Sept. 21, 2021