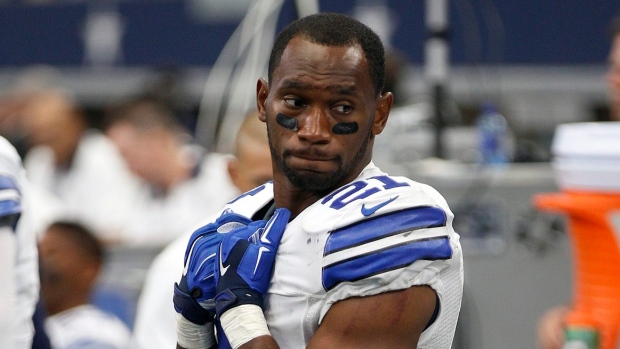 WICHITA, Kan. - Former Dallas Cowboys running back Joseph Randle was jailed early Wednesday after an altercation at a Kansas casino.

Randle was asked to leave the Kansas Star Casino in Mulvane late Tuesday after causing some unspecified concerns on the casino floor, said Fred Waller, an enforcement agent with the Kansas Racing and Gaming Commission.

Randle left, but then returned. Randle started arguing with security officers, and a scuffle ensued, Waller said. Several agents had to restrain him and he was taken to the county jail.

"He was belligerent and causing some problems on the casino floor," Waller said, citing the incident report. "The whys, I don't know."

The Kansas Star Casino declined comment, saying it was a law enforcement matter.

No formal charges have been filed yet, said Stephanie McGinnis, legal secretary at the Sumner County attorney's office. Randle remained jailed Wednesday morning on a $25,000 bond.

The NFL had investigated Randle's arrest in February in his hometown of Wichita, though police declined to pursue charges against the running back after a domestic disturbance complaint. Randle was also detained on a shoplifting charge at a Dallas-area mall when police said he tried to take a bottle of cologne and a pack of underwear from a department store. He got deferred adjudication in the case from October 2014.