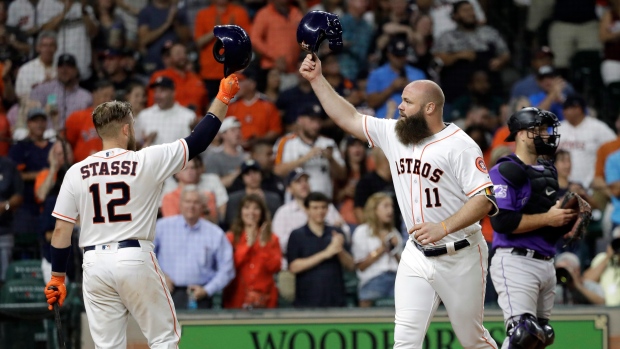 Evan Gattis is calling time on his career.

On an episode of The Athletic's 755 Is Real Atlanta Braves podcast with David O'Brien and Eric O'Flaherty, the 33-year-old World Series winner says he's "done playing."

Gattis didn't play in 2019 after the expiry of his one-year, $6.7 million signed with the Houston Astros prior to the 2018 season.

A native of Dallas, Gattis looked to be taken in the 2004 MLB Amateur Draft after a promising high-school career, but chose to attend college instead, accepting a scholarship to Texas A&M. At college, Gattis developed a substance-abuse problem that derailed his baseball aspirations and forced him to enter a rehabilitation facility.

After attempting to make a comeback through attending a junior college in 2006, Gattis injured his knee, ending his return to the game and caused him to grow despondent and harbour suicidal thoughts, Gattis revealed in 2014. Following a diagnosis of depression and an anxiety disorder, Gattis moved in with his father in Colorado.

In 2010, after three years of being away from baseball, Gattis enrolled at the University of Texas of the Permian Basin, where his step-brother had played baseball. Gattis starred for the team and was taken that spring in 23rd round of the draft by the Atlanta Braves.

Gattis became a full-time major leaguer at the age of 26 in 2013, finishing seventh in National League Rookie of the Year voting. Prior to the 2016 season, Gattis was traded to the Astros as part of a package that saw Mike Foltynewicz go the other way.

He would go on to be a key contributor to the Astros' World Series victory in 2017.