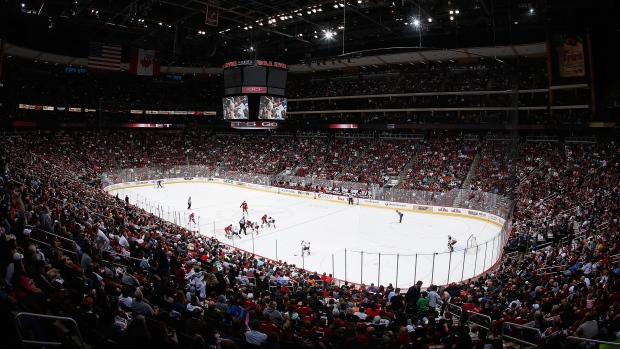 Barroway and fellow Coyotes co-owner Anthony LeBlanc met for about 45 minutes in Weiers’ office with the mayor, Glendale vice mayor Ian Hugh, and a handful of other city staff.

It was a short, to-the-point meeting, absent of any frills like catered sandwiches or even coffee.

“I think water was available,” Hugh said. “We asked if they would consider renegotiating the arena management contract. They said no. There wasn’t a lot to say after that.”

Some sports industry executives say the meeting offers a lesson for other owners. The fact that Barroway announced last December that he was the team’s majority owner but didn’t take the time to visit the mayor’s office and get to know him and his staff was a tactical blunder, executives said.

“The city of Glendale was giving the team $15 million and that automatically means they are the best municipal partner in the NHL, period,” one former NHL team owner told TSN. “It’s insanity that Barroway hasn’t been in Glendale every week, cutting ribbons and taking lunches. If I had a mayor whose council was giving me $15 million, I’d have the guy with me on New Year’s Eve.”

For Barroway and his partners, the damage may now be too extensive to repair.

Glendale city council will vote tonight on whether to cancel its arena management deal with the Coyotes, an agreement that sees the city pay $15 million to the cash-strapped NHL team.

"Discussions and negotiations regarding the contract have been ongoing for months,” the city said in a statement. “Specifically, the city is open to a resolution but it must be one that provides certainty and fairness to both parties, especially the taxpayers. The Council has agreed to stand for transparency and the highest standards of ethics for any future agreement with the Coyotes.”

The special meeting will begin at 9 pm et, but voting may not take place for hours since each member of the public who attends the meeting is allowed three minutes apiece to speak to the issue.

It’s unclear how the NHL might respond if Glendale’s city council votes to quash the agreement. Anthony LeBlanc, the team’s chief executive and part owner, has promised to pursue all legal options if the city cancels the arena management deal.

That’s one option, several NHL executives and investment bankers who specialize in sports industry finance said in interviews with TSN, although it’s an uncertain one.

The former NHL team owner would only speak on the condition of anonymity because he is in talks to buy a minority interest in another NHL club. The investment banker said the league would take business away from his company if he spoke critically about the NHL or its teams.

A bigger issue is the loss to other NHL team owners of the expansion fee cash that’s anticipated in Quebec.

There is a third option. A former NHL team owner said that the NHL might direct the Coyotes owners to put the team up for sale, allowing new owners to start fresh negotiations with the city of Scottsdale, another suburb of Phoenix that is more affluent than Glendale.

The former team owner said the NHL also needs to stop LeBlanc from making public statements about the controversy.

On June 4, responding to the allegation that the team’s arena naming rights deal has not been shared with city councillors, even though the city is owed 20 per cent of the deal, LeBlanc went on a local sports radio station to discuss the claim.

Glendale Vice Mayor Ian Hugh said he expected someone, either a member of the public or a city councillor, would file a complaint with the Arizona Attorney General over LeBlanc’s statement since publicly discussing executive session matters is a breach of state law.

Gary Hirsch, a Glendale resident, asked during a council meeting on Tuesday night whether the city planned to investigate LeBlanc’s comments. The council declined to say.

Kristen Keogh, press secretary for the Arizona Attorney General, wrote in an email that, “criminal charges may arise from a release of confidential information from executive session … The law designates a knowing or intential violation of this provision as a Class 6 felony and a reckless or negligent violation as a Class 1 misdemeanor. Either type of violation could lead to criminal penalties in addition to forfeiture of office or employment.”

Keogh said she’s not aware of any complaint being filed over LeBlanc’s statement.

According to the Arizona State Legislature website, people convicted of Class 6 felonies can be sentenced to between six and 18 months in prison, if it’s their first offence.

In Arizona and other states that categorize crimes by number, a Class 6 felony is the lowest ranking felony offence. Generally, the lower the number the more serious the crime.