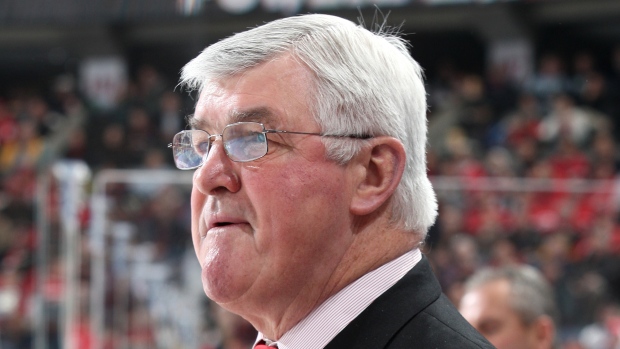 One of just four men to win the Jack Adams Award as coach of the year with two different teams, Quinn was best remembered as a long-time coach of both the Toronto Maple Leafs and Vancouver Canucks, as well leading Canada to its first gold medal in 50 years at the 2002 Olympic Winter Games in Salt Lake City.

Quinn's NHL career began in 1968-69 with the Maple Leafs, who called him up from the Central Hockey League a 25-year-old. It did not take Quinn long to make a name for himself as a player, rendering Bobby Orr unconscious with an infamous open ice hit during the 1969 playoffs.

His coaching career, which would leave his greatest legacy on the game, began almost immediately.

He joined the Philadelphia Flyers in 1977-78 and by the end of the next season he succeeded Hall-of-Famer Fred Shero as head coach. He guided the Flyers to the 1980 Stanley Cup Final, losing to the New York Islanders. Quinn won his first Jack Adams Award after guiding the Flyers to a 48-12-20 record and first in the Patrick Division.

Quinn then joined the Canucks as president and general manager, helping rebuild them from a fifth-place club in the Smythe Division to a team that came within one win of a Stanley Cup in 1994. The additions of Trevor Linden and Pavel Bure through the draft, as well as franchise goaltender and Kirk McLean all came under Quinn's watch.

His next job was another rebuilding effort - this time with the Maple Leafs. He took over as head coach in 1998-99 and assumed the GM duties the following season after leading the team to the Eastern Conference Final and capturing his second Jack Adams Award.

Over six seasons with the Leafs, he led the club to three 100-point seasons and two Eastern Conference Finals, including the club's only regular season division title in the post-expansion era.

His success with the Leafs earned him the role as head coach of the Canadian Olympic men's hockey team for the 2002 Olympic Winter Games. Under Quinn, the team overcame a 1-1-1 round robin record – while outscored 10-8 - and went on to win the gold medal with a 5-2 victory over the host Americans.

Quinn was fired by the Leafs in 2006 after the team failed to make the post-season for the first time since 1997-98 and turned his attention to junior hockey. As part-owner of the Vancouver Giants, he won the 2007 Memorial Cup - his second time hoisting the trophy after winning it as a player with the Edmonton Oil Kings in 1963.

Hockey Canada hired Quinn to handle international duties and he did so with great success. He coached Canada to gold at the 2008 Under-18 World Championship with a team that featured future NHL stars Taylor Hall, Jordan Eberle and Matt Duchene. He took the next step with the same core group, guiding Canada to 2009 World Junior gold with the help of talents like John Tavares, P.K. Subban, Patrice Bergeron and Jamie Benn.

Quinn returned to the NHL for one more season in 2009-10 with the Edmonton Oilers.

In addition to his achievements on the ice and behind the bench, he was also a key builder with the Hockey Hall of Fame Selection Committee and assumed the role of Chairman of the Board in 2013.

"We are deeply saddened by the passing of Pat Quinn”, Jim Gregory, Vice-Chairman of the Hockey Hall of Fame said in a statement.  "Pat is one of hockey's most respected individuals whose lifetime involvement as a player, coach and executive has made an indelible mark on the game, and our thoughts and prayers are with Sandra and all of Pat's family and friends at this extremely difficult time."

Quinn was appointed an Officer of the Order of Canada in 2012.