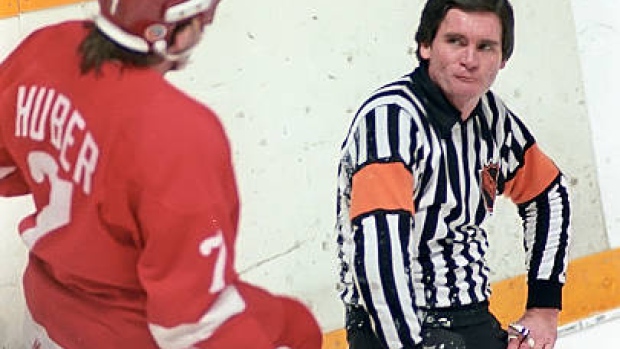 GUELPH, Ont. — Bruce Hood, the former NHL referee who worked 1,100 games over 21 seasons, died Friday of prostate cancer. He was 81.

Kevin Hood said his father died at a hospice surrounded by family in Guelph.

Bruce Hood was on the ice for some of the NHL's most iconic moments, including Bobby Orr's overtime goal in Game 4 of the 1970 Stanley Cup final that gave the Boston Bruins their first title in nearly 30 years.

"He wanted to be the best at everything he did in his life, and refereeing was no exception," Kevin Hood told The Canadian Press. "He would always say, 'You're only half right most of the time.' Half the crowd's with you and half the crowd's against you. The games when you weren't noticed, those were the best."

Hood officiated 1,033 regular-season games, 157 playoff games, three All-Sstar games and three Canada Cups. He was instrumental in the formation of the NHL Officials Association in 1969,

"Bruce Hood brought professionalism and integrity to every game he worked and earned the respect of the players, coaches, general managers — as well as his peers," NHL Commissioner Gary Bettman said in a statement. "In addition to his command of the game and his ability to communicate on the ice, Bruce had a characteristic calmness that brought his excellence to the fore when the pressure was greatest."

Hood also refereed the so-called "Good Friday Massacre" brawl between the Montreal Canadiens and Quebec Nordiques in the 1984 playoffs. The fisticuffs started at the end of the second period and spilled over into the third when the teams returned from the locker-rooms, eventually leading to 252 minutes in penalties and 11 ejections.

Hood retired after the 1984 playoffs and got into the travel business, eventually becoming president of the Association of Canadian Travel Agents. He authored two books on hockey — "Calling the Shots" in 1988 and "The Good of the Game" in 1999 — and tried his hand at politics with the Liberals, losing a tight race in the riding of Wellington-Halton Hills in the 2004 federal election.