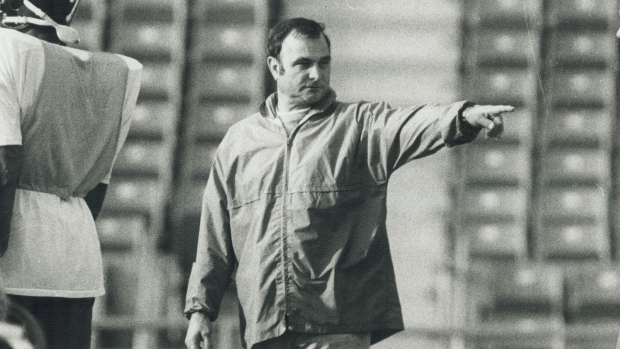 George Brancato may have cemented his legacy as a giant in Ottawa sports when he coached the Rough Riders to their last ever Grey Cup title, but another football legend remembers Brancato's aptitude for teaching the game from way back in his playing days.

When Russ Jackson first arrived in Ottawa in 1958 — well before emerging as one of the greatest CFL quarterbacks of all time — it was Brancato who taught him how to play the other side of the ball as a defensive back.

"George along with Gary Schreider, taught me a lot about the position because in those days you only had two coaches, Frank Clair was the offensive coach and Bill Smith was the defensive coach," Jackson recalled. "So you didn't have a lot of time with the coaches to learn the necessary attributes you had to have to play defensive back.

"I learned a lot from George when I was there that first year in '58. He was experienced at the position, played it well and was willing to share with me as a young rookie."

Brancato, who won Grey Cups with the Rough Riders as a player, assistant coach and head coach, has died at the age of 88. The Redblacks, the current CFL team in Ottawa, confirmed his death Wednesday.

A native of Brooklyn, N.Y., Brancato was a halfback/defensive back with Ottawa from 1957-62. The former LSU star earned his first Grey Cup as a player with the Riders in 1960 on a team that included Jackson and Schreider.

Undersized, at least by football standards, at five-foot-seven and 177 pounds, Jackson said what Brancato lacked in size he made up for with smarts.

"Being tough is fine, but if you're too small you're going to get the heck knocked out of you. You've got to be smart too, and I think George had that attribute," he said.

"He never complained when he got bumped around and was always willing to go back out there on the field and do his job."

Brancato's mind for football transitioned naturally to coaching, and he claimed a second Grey Cup title in '73 as an assistant coach with the club.

He took over as Ottawa's head coach in 1974 when Jack Gotta left the CFL team for Birmingham of the now-defunct World Football League. After capturing the Annis Stukus Trophy as the CFL's top coach in 1975, Brancato guided the Riders to a 23-20 Grey Cup win over Saskatchewan in 1976 in Toronto.

Tight end Tony Gabriel cemented the victory for Ottawa with a 24-yard TD grab late in the fourth quarter from quarterback Tom Clements, a play affectionately dubbed "The Catch."

Brancato and the Riders narrowly missed registering the biggest upset in Grey Cup history five years later. After finishing the regular season with a 5-11 record, Ottawa surged to a 20-1 halftime lead over the heavily favoured Edmonton Eskimos (14-4-1).

But the Eskimos, with Hall of Fame quarterback Warren Moon, rallied for the 26-23 victory at Montreal's Olympic Stadium. Kicker Dave Cutler's 27-yard field goal late in the fourth quarter provided Edmonton with the fourth of its five straight CFL titles (1978-82).

Brancato was fired following the '84 season after the Riders posted a 4-12 record. He compiled an 82-90-4 regular-season record with the Riders, finishing behind only Clair (116) in victories. Brancato's teams were 8-10 in the playoffs.

It was during his CFL coaching tenure that Brancato earned the nickname "The Ice Man," because he routinely chewed ice on the sidelines.

Brancato returned to coaching in 1989 with the Arena Football League's Chicago Bruisers. After the franchise folded, he served as an assistant with the Dallas Texans.

He rejoined the Riders in 1993 as a special-teams and secondary coach on Ron Smeltzer's staff. The following year he was an offensive co-ordinator with the expansion Shreveport Pirates.

Brancato was also an assistant coach with Saskatchewan (1985-86). He finished his coaching career in the AFL with Anaheim and Florida, retiring after the '99 campaign.

Brancato played both offence and defence, spending time in the NFL with the Chicago Cardinals (1954-55). He made his CFL debut as a running back with the Montreal Alouettes in 1956 and played mostly on defence with Ottawa but still made appearances on the offensive side of the ball.

"He was always there, always ready to play, and never had any qualms if he had one of the toughest receivers on his side and had to cover him," Jackson said.

Brancato was a CFL all-star in 1961 and was inducted into the Ottawa Sports Hall of Fame in 2002.