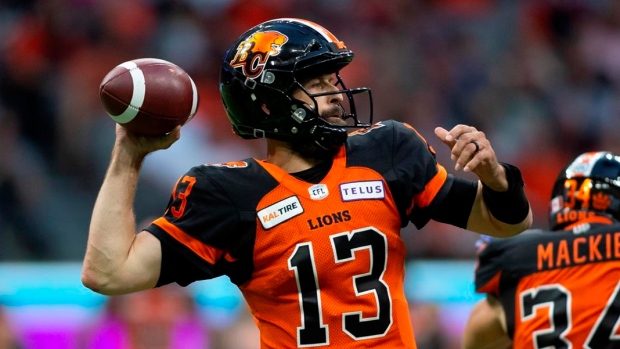 Catch Reilly's return tonight, starting with the pre-game show at 8:30pm et/5:30pm pt across the TSN Network, on TSN.ca, and streaming on TSN Direct.

"No because it's not a Mike versus Trevor thing at all and I think Trevor is veteran enough to know that," Maas told reporters in Edmonton this week ahead of a game against Reilly's B.C. Lions "He understands our team and our philosophy here of knowing the Eskimos are playing the Lions, not Mike versus Trevor.

"I don't even think it's even worth a conversation."

Reilly spent six seasons with Edmonton before signing with the Lions as a free agent last February. Edmonton then dipped into free agency to land Harris, who capped his three-year stay in Ottawa last season by guiding the Redblacks to the Grey Cup game.

Reilly, 34, is expecting a mixed reaction from the Commonwealth Stadium faithful.

"I'm sure there's a contingent that's upset with me leaving but I think for the majority of them, they understood the situation and a lot of the reasons why I was leaving," Reilly told reporters in Vancouver. "It's one of those deals where I have no bad taste in my mouth about them.

"My time there was awesome, I loved it all and appreciated every minute of it. I think when it comes to the fan base, most of them will cheer and be appreciative of the time that I spent there once the game starts. After that, they'll probably boo me every second, which I expect nothing less."

Still, Reilly said the contest will definitely have a different feel for him.

"It will be a little weird to be on the opposite sideline," he said. "It's always exciting to play against your old team.

"I used to feel that way when I played against B.C. (where Reilly started his CFL career)"

Reilly led Edmonton to a Grey Cup title in 2015 and two years later was the CFL's most outstanding player. He threw for over 5,500 yards in each of his final three seasons in Alberta before returning to B.C.

Reilly, a native of Kennewick, Wash., began his CFL career with the Lions in 2011 before coming to Edmonton in 2013.

Harris, 33, enjoyed a stellar Edmonton debut, completing 32-of-41 passes for 447 yards and three TDs in the Eskimos' 32-25 home win over Montreal. Harris also ran for a touchdown.

Reilly was the CFL's only other 300-yard passer last week. He completed 22-of-39 attempts for 324 yards with a TD and two interceptions in B.C.'s 33-23 season-opening home loss to Winnipeg.

Harris was hardly a one-man show offensively as CJ Gable accounted for 154 of the Eskimos' 161 rushing yards while adding three catches for 29 yards and a TD. Ricky Collins recorded nine receptions for 175 yards and Kenny Stafford caught seven Harris passes for 98 yards and two touchdowns.

Edmonton accumulated 608 net offensive yards and had the ball for over 34 minutes.

"It's really not about Mike going back to Edmonton," said Lions head coach DeVone Claybrooks. "The reason it's an important game is because it's the next game and we look at it as such.

"We've got to improve to be more efficient offensively and he (Reilly) understands that. If he throws for 180 yards and we win the game, he's happy. If he throws for 500 and we lose, he's going to be (upset)."