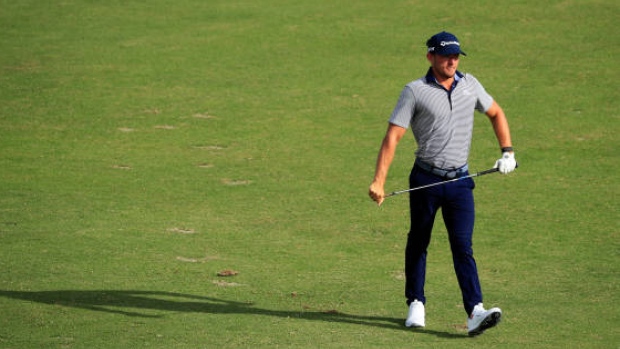 LAKE WASKESIU, Saskatchewan - Michael Blair, Taylor Funk, Charles Wang and Harrison Ott all were able to finish their opening rounds in the Elk Ridge Open on Thursday. They also all shot 5-under 65s, and they share the clubhouse lead at the weather-delayed third Fortinet Cup tournament of the PGA TOUR Canada season.

Seventy-six players from the 156-player field were unable to finish their rounds when officials halted play for good due to darkness. Play will resume Friday morning. As it stands now, the quartet lead four Americans—Joseph Harrison, Justin Doeden, Jordan Hahn and Noah Goodwin—by a stroke. Of those still on the course, Matthew Short is 4-under halfway through his round.

Blair was more than happy with his day. The 30-year-old from Hamilton, Ontario, recorded six birdies along the way with only one bogey marring his scorecard. Of those completing their rounds, Blair may be the most confident heading into Friday. He noted that the course is playing into his hands. He played the front nine in even-par (one birdie and one bogey) and then rallied after making the turn.

“(Elk Ridge) is not the widest off the tees. You’ve got to drive it well,” Blair said. “I feel like driving is one of my strengths So if you get it in play around here it’s scorable. I felt like it played into my hands a little bit.

“The front nine is the tougher nine, with no par-5s,” he continued. “There are a couple of tough holes. I was just trying to get through that nine because there are couple of (birdie) opportunities on the back nine.”

He started a streak of four consecutive birdies at No. 10 then added one more on the 16th.

“I managed to make birdie on 10 after not hitting a great tee shot. From there, I started getting in the fairway giving myself some short irons,” he added.

Wang was more than glad he was able to finish his day’s work, allowing for a little extra sleep after having to suffer through some stops and starts to his day as bad weather plagued Elk Ridge Resort. In the early afternoon, officials eventually pulled players off the course due to lightning in the area. While his momentum slowed on his back nine after the delay, Wang opened his day with a birdie, fell to even-par when he bogeyed the fourth hole then added three more birdies—on Nos. 6, 8 and 9—before making his eagle on No. 10.

Funk, the only son of PGA TOUR and PGA TOUR Champions veteran Fred Funk is happy with his position among those who completed their rounds. The younger Funk had a bogey-free day, with four birdies on his back nine and one on his front, No. 6, for his 65.

“I knew I was close last week. I’ve been playing pretty good. My irons have been good, and you have to hit some good irons around here to put yourself in position,” Funk said. “I did that today. I never really had many chances to make bogey.”