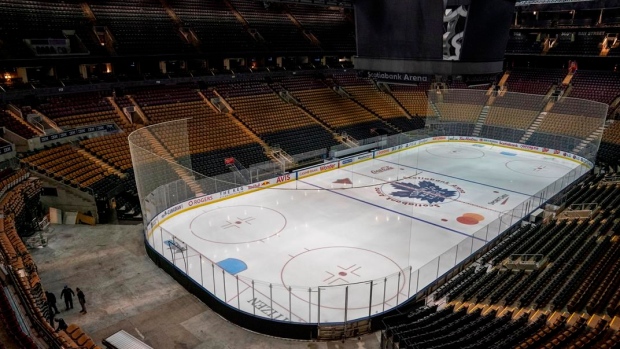 NHL commissioner Gary Bettman said Wednesday the league has been busy “modelling” different scenarios for a potential summer restart to the 2019-20 season.

That includes the possibility of resuming play in two to four centralized locations, likely without fans, and the idea of a draft held in June before the season is completed.

“All of this is contingent, nothing has been decided,” Bettman said in an interview with Sportsnet. “The decision ultimately will be made by medical people and people who run governments at all different levels. We’re not going to try to do anything that flies in the face of what we’re being told is appropriate.”

Bettman said there is the possibility of multiple games being played per day in two or “as many as four” NHL cities, with the league never having seriously considered play at non-NHL venues.

The plan could include regular-season play, a traditional 16-team playoff, or even an “expanded” playoff.

Teams might be grouped by division, but not necessarily, Bettman said. Sources indicated that the NHL could have teams playing at sites outside of their usual geographic area, such as two groups of eight teams at two sites in the West – circumstances that would be dictated by which localities have eased restrictions.

“We’re just constantly trying to figure out what our alternatives will be,” Bettman said.

- “The location could be anywhere besides a [COVID-19] hot spot.”

- “We need a lot of ice. There does need to be practice facilities.”

- “We need four NHL-calibre locker rooms. Because if you’re going to play three games in one day, you’ve got to be moving things around, and you’ve got to make sure that we’re taking the proper sanitizing procedures.”

Sources indicate the league is keeping a running list of up to 10 NHL cities that could suitably host in the event of a centralized restart.

Locations such as St. Paul, Minn., and Raleigh, N.C., have been reported as possibilities. But construction of the Hurricanes’ practice facility is running behind schedule now due to the coronavirus and their current facility is not fit to host teams.

The Arizona Coyotes have reportedly expressed a desire to host. Columbus could make a ton of sense with its state-of-the-art practice facility attached to Nationwide Arena.

Here are four additional cities where the NHL could host centralized summer hockey:

COVID-19 data: The Edmonton area accounts for just 13 per cent (451) of Alberta’s total positive cases (3,401), compared to more than 70 per cent in Calgary. Alberta is one most heavily tested provinces/states per capita on the continent. (Source: CTV News)

Edmonton’s case: Edmonton’s ICE District checks all of the NHL’s boxes. It’s a completely self-contained area, with the sparkling new arena, a spacious community ice rink, and a luxury JW Marriott hotel all connected – allowing for players and officials to never step outside. The 322-room hotel with 24 suites, which is owned by Oilers owner Daryl Katz, could house up to seven teams, and is equipped with two restaurants, more than 15,000 square feet of meeting space, plus a gym and pool. Add in the fact that Edmonton is in the second-least infected city in the NHL, it figures to be on any short list. Alberta premier Jason Kenney said Wednesday he received a call from Bettman.

“There was a very general conversation,” Kenney said in his briefing. “We have not received a proposal of any kind. I underscored that if a proposal were forthcoming, we would obviously expect the league to prepare a very detailed plan to mitigate risk.”

Toronto’s case: Scotiabank Arena’s proximity to a number of rinks and arenas, walking distance to hotels, as well as experience hosting NHL tentpole events, makes Toronto a top candidate. The 2016 World Cup of Hockey proved the arena could house eight teams and their equipment under one roof. During that tournament, Coca-Cola Coliseum – home of the AHL’s Marlies – was used as a practice facility. The Maple Leafs are among the only NHL teams that has a four-sheet practice hub, the Ford Performance Centre in suburban Etobicoke. Additionally, the old Maple Leaf Gardens - now named Mattamy Athletic Centre - is located downtown. The NHL also has bodies on the ground with one of its league offices connected to Scotiabank Arena, plus it could provide the easiest logistics for the league’s Canadian national broadcast partner. Given all of the ice and infrastructure, Toronto could feasibly host all 16 teams for a Stanley Cup playoff. But for one of the NHL’s most densely populated cities, it might all come down to medical data and risk factors presented.

Pittsburgh’s case: The city’s downtown PPG Paints Arena has hosted some of the NHL’s biggest games over the last decade and there is a suitable Marriott hotel located directly across the street. But the Steel City’s biggest selling point for hosting an NHL restart may actually be its top-rated UPMC Lemieux Sports Complex practice facility, located 20 minutes away in quiet Cranberry, Pa. The two-pad complex has seating for more than 1,500 in its main arena, where the Pens practice, plus the partnership with the University of Pittsburgh Medical Center provides sports medicine and medical care at one of the best hospitals in the country.

COVID-19 data: Texas has only the 12th-most positive cases in the United States despite being the second-most populous state. There have been 4,790 positive cases in the four county Dallas-Fort Worth metro area as of Wednesday, which is proportionate to its population among 29 million Texas residents. (Source: Texas Department of State Health Services)

Dallas’ case: Dallas may have a leg up because Texas could be among the first states to ease restrictions related to COVID-19. Retail stores that have been closed since mid-March will soon begin to open for curbside pickups. Plus, the city has a robust case on its own merit, and likely a willingness to host with a little Texan hospitality. American Airlines Center is a modern facility that would provide significant space. Outside, across Dirk Nowitzki Way, there is a stylish ‘W’ Hotel with 220 rooms and 32 suites - which could serve as home to nearly five teams. The Stars’ practice facility, Comerica Center, is 25 minutes away in Frisco, plus the team owns seven other rinks in the DFW metro area. One of the only mitigating factors might be the Texas heat and humidity in July or August, but Bettman said recently that is one of the league’s least concerns.

No matter where, no matter when, one thing is clear: the NHL is working on a list of options to resume the season if it is at all feasible.