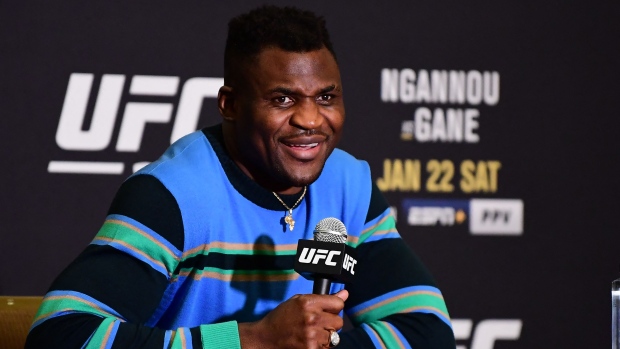 Francis Ngannou had previous history with Stipe Miocic when he knocked him out to claim the UFC heavyweight title at UFC 260.  The pair had previously met at UFC 220, three years earlier, with Miocic earning the victory.

Ngannou will put his belt on the line for the first time on Saturday at UFC 270 against another man that he shares history with, interim heavyweight champion Ciryl Gane.

The two were briefly training partners, but didn’t spend an extended amount of time together and Ngannou does not see Gane differently than anyone else that would be standing across from him in the Octagon.

“He’s still an opponent, he’s still coming after me to take what I’ve worked for, so I have to defend,” Ngannou told TSN.

In order to defend, Ngannou will lean on the trademark power that has helped him earn five consecutive victories and five consecutive KO stoppages, with only the title-winning effort even escaping the opening round.

The 35-year-old envisions his first defence ending in the exact same manner.

“I would say knockout in the second round, or less than two rounds,” said Ngannou. “Because it could likely happen in the first round as well.”

“I think the first round is going to be moving a lot, running away,” said Ngannou. “I think his goal is to drive me down to the decision and maybe throw some kicks along the way and expect me to get tired or something like that.”

Ahead of the bout, footage of the two fighters sparring at MMA Factory, the gym where Ngannou used to train and Gane is currently a member, was released.

The champion says that selective footage has been made public to make his opponent look better and the point of having sparring sessions is to improve, not earn victories over your partner.

“In training you are not trying to hurt somebody,” said Ngannou. “Even though you are sparring him, you are still protecting him. In the fight you use the force intentionally to hurt and I’m able to hit to hurt somebody, that’s the difference between training and fighting.  From me hurting my sparring partners over time, I’ve learned how to spar without hurting anybody and that’s the goal. I want them to give me hard rounds, I want them to push me, I want them to put me in the zone maybe I’m not used to be. I know that if I use the power, that it might stop in the next minute, that we won’t go longer, maybe not even through the round.”

Another much talked about encounter between the UFC 270 main event combatants occurred backstage at UFC 268 when Ngannou walked passed Gane and his team without even acknowledging his former training partner.

The Cameroon native believes the promotion was behind the two fighters crossing paths when they did.

“I do believe that was a setup,” said Ngannou. “They prepared that and they got it.  For what reason? I don’t know, but it was a setup.”

Among those on Gane’s team was Ngannou’s former coach Fernand Lopez. The two have an acrimonious relationship and he appears to be the reason for the snub at Madison Square Garden.

The champ says it’s all part of doing what’s best for him.

Ngannou says if he had come across Gane by himself this would have gone differently.

“Maybe I wouldn’t go shake his hand, but I would at least wave to him and say hi, nod my head, say what’s up or something,” said Ngannou.  “Make a sign for sure.”