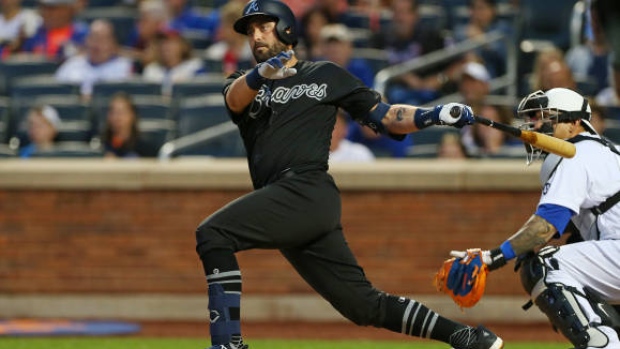 NEW YORK — Just about every newcomer to the Atlanta Braves has made an immediate impact lately.

The newly signed catcher had three hits and three RBIs in his Atlanta debut, and the Braves beat the New York Mets 9-5 for their seventh straight victory.

"He was excited about getting here — and it showed," Braves manager Brian Snitker said.

Ronald Acuña Jr. hit a tiebreaking single in the eighth inning, and recent addition Billy Hamilton dashed home with another run on the play thanks to a mental lapse by Mets left fielder J.D. Davis.

Freddie Freeman launched his career-high 35th home run in the ninth. Freeman, who began the day leading the majors in RBIs, increased his season total to 105.

Along with Cervelli and Hamilton, substitute shortstop Adeiny Hechavarría was picked up off the scrap heap (from the Mets) not long ago. That trio and three key relievers acquired at the July 31 trade deadline have given the Braves a huge boost over the past two nights and beyond.

"All the new guys were — golly!" Snitker said.

Ozzie Albies and Josh Donaldson also went deep for the NL East leaders, each connecting on a solo shot in the third off starter Zack Wheeler. Atlanta improved to 10-5 this year against the Mets, who remained two games behind the Chicago Cubs for the second NL wild card.

Rookie slugger Pete Alonso matched a Mets record with his 41st home run, a three-run shot that put New York ahead 5-4 in the fifth after trailing 4-0. But third baseman Todd Frazier was unable to snag Cervelli's hard one-hopper in the sixth, a two-base error that led to Cervelli scoring the tying run on Rafael Ortega's single.

After recovering from yet another concussion, Cervelli played his first major league game since May 25. The veteran backstop stroked a two-run double on the second pitch he saw for a 2-0 lead in the second.

"I was playing like a little kid," Cervelli said. "That's all that matters, man. From now on, just enjoy every game, every opportunity, and do what I have to do."

He singled his next time up and added an RBI double to deep centre in the ninth.

"Hasn't played in three months, comes out and gets three knocks. Just makes it look that easy," Hamilton said.

From his knees, Cervelli also threw out Amed Rosario trying to steal second in a tie game in the seventh.

"After he got that hit in the second inning I just said, 'Well, just get a new guy every single day,'" Freeman said, adding that the recent additions are energizing the entire clubhouse. "It's been pretty amazing."

Cervelli, released Thursday by Pittsburgh, signed with the Braves earlier Saturday to help fill in with Brian McCann on the injured list.

Ortega sparked Atlanta's two-out rally in the eighth with a single against Brad Brach (4-4) that went off the glove of a leaping Jeff McNeil at second base. The speedy Hamilton followed with a pinch-hit single and scored from third when Davis held the ball after Acuña's single and then lobbed it back to the infield, drawing boos from the crowd of 38,300.

"This is definitely fun. I keep getting a chance to play and I keep having fun with it," said Hamilton, who hit a go-ahead single in the 14th inning of Friday night's victory for his first hit with Atlanta.

Davis called it a "helpless" feeling."

"That's my fault. I should be throwing into (Rosario at shortstop) right away instead of picking up the runner at first," Davis said.

Wilson Ramos extended his hitting streak to 18 games for the Mets, the longest active streak in the majors.

Alonso had the souvenir ball in a plastic case after becoming the first rookie to tie his team's home run record since Hall of Famer and former Mets broadcaster Ralph Kiner did it for the Pirates with 23 in 1946, according to STATS. Todd Hundley (1996) and Carlos Beltran (2006) also hit 41 home runs in a season for the Mets.

"It's surreal," Alonso said. "That moment was really special. I couldn't have dreamed it up any better."

The slugger also has 100 RBIs, making him the first Mets player to reach the plateau since David Wright had 103 in 2010.

Atlanta's bullpen has fired 24 consecutive scoreless innings. The relievers are 5-0 with three saves and a 0.34 ERA during the winning streak.

Braves: Dansby Swanson (bruised right foot) was scheduled to play shortstop in his third rehab game at Class A Rome. ... LF-3B Austin Riley (right knee sprain) was set to play left field for the first time on his rehab assignment at Rome.

Mets: McNeil, the NL batting leader, was reinstated from the injured list after missing 10 days with a strained left hamstring. With the score tied, he delivered a pinch-hit double on the first pitch he saw leading off the seventh but was thrown out trying to advance to third on a grounder to shortstop. McNeil remained in the game and singled in the ninth. ... Mets reliever Edwin Díaz, who gave up Freeman's homer, exited with tightness in his back and neck area. He said he doesn't think it's serious. ... Backup catcher Tomás Nido was placed on the seven-day injured list with a concussion and the club selected the contract of veteran catcher René Rivera from Triple-A Syracuse. Reserve outfielder Aaron Altherr was designated for assignment. ... OF Brandon Nimmo (neck) had a day off on his rehab assignment at Syracuse.