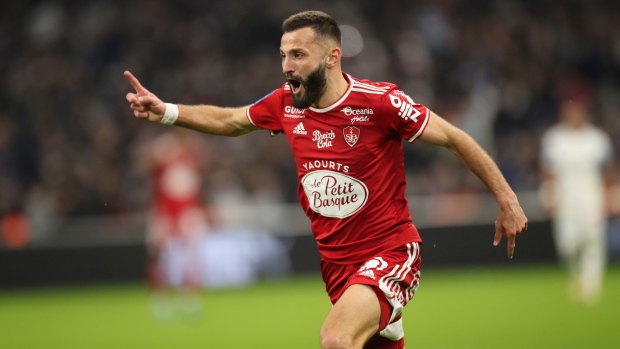 LENS, France (AP) — Georginio Wijnaldum snatched a late goal for Paris Saint-Germain to draw at Lens 1-1 after goalkeeper Keylor Navas made a big blunder during their enthralling French league game on Saturday.

The league leaders looked set for their second loss until the Dutch midfielder jumped higher than his marker in added time to head home a pinpoint cross from Kylian Mbappe.

In front of a buoyant crowd at Stade Felix Bollaert, Lens played with pace and flair but missed a cutting edge until Seko Fofana broke the stalemate in the 62nd minute.

PSG looked disorganized most of the time. Lionel Messi, who was awarded a record-extending seventh Ballon d’Or this week, hit the woodwork in the first half and could not add to his meager tally of one goal in the league since he joined this summer. Neymar was out injured.

Lens took the lead while Messi was lying on the pitch following contact with Facundo Medina. Fofana unleashed a powerful long-range strike that Navas failed to block.

Despite two consecutive draws, PSG increased its lead to 13 points after second-placed Marseille lost at home against Brest 2-1.

Honorat's powerful strike in the 69th from Jeremy Le Douaron's brilliant assist sealed Brest's sixth consecutive win and lifted the Britanny side to sixth place, level on points with defending champion Lille. Before its unexpected revival, Brest failed to win any of its first 11 games this season.

“We have to keep our feet on the ground and work hard, as we are doing now," Brest coach Michel Der Zakarian said.

Marseille peppered the visitor's box with harmless crosses but persevered. Gerson played a one-two with Dimitri Payet on the edge of the box and unleashed a precise shot into the top left corner.

After a shaky start in Marseille after arriving this summer from Flamengo, the Brazil international seems to have finally settled. It was Gerson’s second goal in four days after the midfielder scored the winner against Nantes midweek.

Brest leveled in the 53rd after Boubacar Kamara was penalized for handball. Romain Faivre coolly converted.

Lille came from behind to defeat Troyes 2-1 after Jonathan David, the league top scorer, bagged his 11th. With Lille trailing, the Canada forward went in as a substitute after the interval and scored three minutes later from Benjamin André’s through ball.

David created the winner four minutes from time when he served up a cross that was turned into his own net by goalkeeper Jimmy Giraudon.