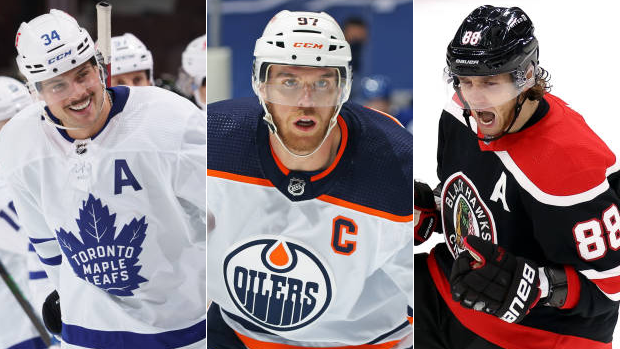 Boom. Just like that, we’ve hit the midseason mark, and the sprint to Lord Stanley in this 56-game regular season is officially on.

But the Stanley Cup isn’t the only trophy coming into clearer focus.

It’s time to begin considering the broader slate of end-of-season NHL Awards, which will be most interesting in this unique all-intradivisional shortened season. North Division scorers pack the leaderboards, so it will be up to voters to decide how they stack up leaguewide.

Here are my selections for six popular awards at the midway point:

Reasoning: I tried not to overthink this one. Why search for reasons not to award the Hart Trophy to the player head and shoulders above everyone else in the NHL? Yes, the Hart isn’t the most outstanding player award, it’s the most valuable player award, and it’s hard to argue that the best player in the world is not also the most valuable. McDavid has more assists (32) than all but a handful of players have total points, and he is second in goals. Pretty, pretty good. That doesn’t take anything away from Kane’s magical season, as he is carrying the Hawks on a nightly basis without Jonathan Toews, Kirby Dach and Dylan Strome. Matthews and Fleury have been incredible. There is a larger philosophical argument to be had with Draisaitl on the ballot: Can he really be voted the most valuable if he isn’t the most valuable on his own team? For now, I’m comfortable with him on there, but I was thinking about Aleksander Barkov in that fifth spot, along with Andrei Vasilevskiy.

Reasoning: Hedman has been in full-on Thor mode all season long, picking up right where he left off after accepting the Conn Smythe Trophy as playoff MVP. Carlson has been consistent, Doughty has enjoyed a bounce-back season. My conundrum: What to do with Petry? He leads all defencemen in goals and is tied for second in points. He’s on pace for 20 goals. Any defenceman with 20 goals deserves a Norris vote. I believe part of Petry’s stats are skewed by the intradivision schedule. Like Tyler Toffoli, he’s feasted on the Canucks, who have been among the worst teams in the league. He’s morphed into an incredibly dynamic defenceman, but half of his 10 goals are against Vancouver. We’ll need to see more in the second half.

Reasoning: There is no runaway rookie of the year winner this year, at least not yet anyway. The question was simple enough: Who has been the most impactful rookie on the Minnesota Wild this season, Kaprizov or Kahkonen? It’s a difficult one to answer. For now, we’re going with Kaprizov, who has electrified and changed the feel around the Wild. They’re a fun team to watch now. Lankinen, Kahkonen and Vanecek are all still in the hunt to become the first goaltender to win the Calder since Steve Mason in Columbus in 2008-09.

Reasoning: Some have called Fleury the NHL’s Comeback Player of the Year, an unofficial award winner. My take: Fleury never stopped being good. What he is coming back from is a sword in the back, as so artfully tweeted in a meme by his agent Allan Walsh last season, when he lost his starting role to Robin Lehner in the playoffs. Fleury leads the NHL in save percentage (.938), goals-against average (1.73) and shutouts (four). He’s been the model of consistency this season, allowing two or fewer goals in 12 of 17 starts, which has really been the modus operandi of his career while playing an incredibly volatile position.

Reasoning: Raise your hand if you had Florida challenging Carolina and Tampa (!) for top spot in the Central Division. Not seeing many hands out there. Quenneville has been forced to put out a few fires this season, starting with Keith Yandle’s exclusion and then unexpected inclusion, and he’s worked his magic with an imperfect roster - including sticking with an unconventional first line that has found success. You should also count a Trotz team out at your own peril. Trotz’s Islanders play cohesively and his style so well, making it a really close race.

Reasoning: The task for Dubas wasn’t to reinvent the wheel in Toronto, even after a few crushing playoff exits. The challenge was instead to surround the Maple Leafs with the right complementary pieces. He’s accomplished that with Joe Thornton and the injured Wayne Simmonds, and remade the blueline with T.J. Brodie and Zach Bogosian, all on a shoestring salary-cap budget. Now let’s see how he maneuvers a critical trade deadline as the Leafs attempt to take advantage of this unique opportunity in the North Division.

[Full disclosure: As a member of the Professional Hockey Writers Association, Frank Seravalli votes on the Hart, Norris, Calder, Selke, Byng and All-Star and All-Rookie teams. The NHL’s GMs vote on the Vezina and GM of the Year Award, while the Broadcasters Association picks the Jack Adams.]​