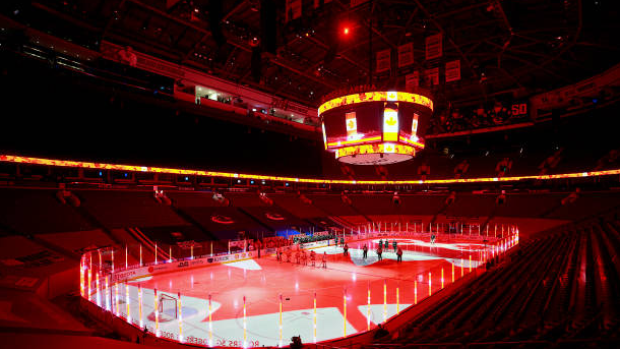 South of the border, the National Hockey League hit a major milestone on Tuesday as now more than half (17) of the league’s 31 markets have announced they currently allow or plan to allow fans to return to arenas in limited capacities this month.

It’s a welcomed step toward some semblance of normalcy for fans and players alike – even at 10 per cent capacity – particularly in markets like New York, which was one of the most restrictive in the United States based on COVID-19 regulations.

“It’s exciting for us, and for them [the fans], that we can see some light at the end of tunnel here,” Islanders forward Jean-Gabriel Pageau told reporters last week.

That light at the end of the tunnel has not been seen everywhere, especially in Canada.

It’s fair to say the NHL is closely monitoring vaccine distribution in both countries. An especially slow rollout in Canada may mean that Canadian arenas could be empty or operating in limited capacities come October, when the entire league is supposed to ramp up again.

“The progression of the vaccine rollout both in the United States and in Canada is going to be an important factor in what next season looks like, both competitively and economically,” NHL deputy commissioner Bill Daly wrote in an email to TSN on Wednesday.

Daly wrote that it was too soon to make any sort of accurate revenue projection for next season, though the NHL has models for different scenarios.

But as Daly hinted, Canada’s delayed vaccine rollout could impact everything from revenue to competition, which could include division alignment, travel and trades.

“As much as we would like to know more, the fact remains that the landscape continues to evolve and it’s still premature to be making any meaningful predictions for what next season will look like,” Daly wrote. “Certainly, we remain optimistic that our current trajectory toward a more normal business environment will continue and its pace will increase.”

The holdouts are mostly geographically grouped: all seven Canadian clubs comprising the North Division plus the three California-based teams. Then there are a few major market outliers, such as Chicago, Colorado and Washington.

None of the seven Canadian teams seem anywhere close to having fans returning, though the Edmonton Oilers did recently submit a proposal to Alberta Health in an attempt to bring fans back in the coming months.

“We recognize the value that sports bring, but are proceeding cautiously to protect the public health and prevent the spread of COVID-19,” Alberta Health spokesperson Christa Jubinville said in a statement to TSN’s Ryan Rishaug. “No decision has been made at this time. A return to fans at sporting and other events will be permitted when these activities can be done safely.”

The decision by local health authorities to loosen restrictions in the U.S. has generally been dictated based on a combination of two statistics: declining COVID-19 infection rates and increasing population vaccination rates.

The trend of those two numbers has the NHL hopeful that the Stanley Cup Final can be contested in half or mostly full arenas when the puck is scheduled to drop in late June.

President Joe Biden vowed on Tuesday that the United States will have enough vaccines for every American adult “by the end of May.”

That is certainly welcomed news for the NHL. Any small uptick in fans this season will allow teams to recoup revenue in what is a shortened season with significant financial loss. But the entire NHL business plan, as negotiated in the new Collective Bargaining Agreement, revolves around the hope that the 2021-22 season can bounce back close to pre-pandemic levels beginning in October.

Canada currently ranks 41st out of 108 countries in vaccine doses distributed per 100 people, according to Bloomberg’s global vaccine tracker, placing it significantly behind smaller and less wealthy nations such as Romania, Slovenia, Serbia, Morocco and Seychelles.

Prime Minister Justin Trudeau said Wednesday he is “very optimistic” Canada's immunization timeline will speed up. The federal government's pledge is that any Canadian who wants to be vaccinated will be by the end of September.

Trudeau said speeding up that timeline depends on “if indeed all of the vaccinations we have contracted for are able to be manufactured and shipped in the right ways.”

According to CTV News, the federal government’s latest timeline shows at least 14.5 million Canadians will be able to be fully vaccinated by Canada Day.

Meanwhile, the United States is currently vaccinating nearly as many people per day (1.94 million) as Canada has entirely (2 million) since December. At its current pace, it would take the United States just 127 days to vaccinate its entire population – or well in time for the start of next hockey season.

That’s created a significant disparity for fan bases on both sides of the border, with uncertainty in the North and anticipation in the South.

“There’s something about the human spirit, the human emotion that you can’t replicate,” Islanders coach Barry Trotz told reporters last week. “It’s pure joy, it’s pure anger, it’s pure everything. It’s fellowship, it’s the events, it’s the buzz. I mean, there’s nothing that can replicate that.”