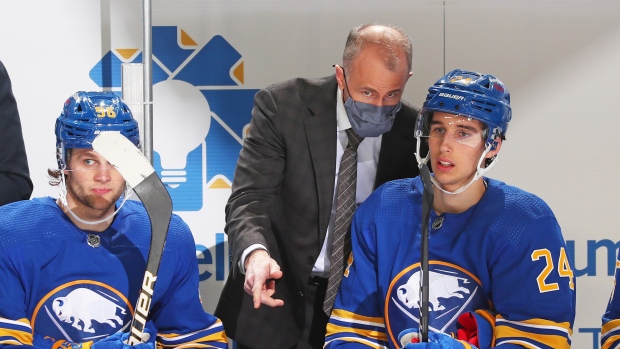 Don Granato was short on time, something he knows a thing or two about. The day he took over as Buffalo Sabres interim head coach on March 18, the team’s morning skate was cancelled due to the National Hockey League’s COVID-19 protocol.

The only chance he had to gather his reeling roster was a couple hours before puck drop and Granato was tasked with finding the words to shake a sleepwalking team out of an abysmal 12-game winless streak, one of the longest in the NHL this century.

“I looked at them and I said, ‘I guarantee you this is not the worst thing you will go through. I assure you our situation is not bleak. Pick our heads up,’” Granato recounted Thursday.

Granato could say that confidently because, well, he knows bleak. The core of this Sabres roster was there in 2019 when Granato, then an assistant to Ralph Krueger, was placed in a medically induced coma to stave off a rare bacterial infection and pneumonia. He was told he had minutes to live.

And in 2005 Granato took a leave from the St. Louis Blues to battle Hodgkin’s lymphoma, which derailed a career path that seemed destined for an NHL head coaching job after being named the AHL coach of the year in 2000-01.

Many of the head coaches Granato edged for the Louis A.R. Pieri Memorial Award that season beat him to an NHL bench: Mike Babcock, Bruce Boudreau, Michel Therrien and John Stevens.

But two decades later, those health issues and numerous stops and roles throughout the hockey world led Granato to that moment in the dressing room with the Sabres. It was an opportunity he was not going to let pass by.

“You know, I’m grateful I didn’t get here earlier. Maybe I would have gotten here before now if I hadn’t gotten sick,” Granato said. “But I think it’s actually a blessing from the professional side, because I’m not so sure I would have been ready.

“It really feels a lot less stressful. It’s more natural. When [GM] Kevyn [Adams] asked me if I could change things, a surge went through me. This is what I do.”

So Granato got to work. His first order of business was to reinflate the Sabres’ tires. To say it was doom and gloom would be an understatement.

The Sabres were wallowing, and it felt like an entire decade of missing the playoffs cast a pall on everyone. Granato’s message was simple: He told one player he spent two years as Joel Quenneville’s assistant in Chicago and never saw anyone wear a Stanley Cup ring. No one talked about winning the Stanley Cup. Even though they had won three in five seasons, it was in the past. So why would anyone in the Sabres organization talk about the dysfunction and lack of success over the past 10 years?

“We had lost the ability to see how to win,” Granato explained. “Our reflex was playing to not lose. We had to stop fearing losing. I told them we’ll win when we actually know how to win. I wanted them to come here and feel good, love being an NHL player every day.”

Granato, now 53, just wasn’t sure how long it would take. He is a quick study. The Downers Grove, Ill., product is the brother of Tony and Hockey Hall of Famer Cammi. He was a goalie until age 14, then started playing centre and earned a scholarship to the University of Wisconsin, where he won a national championship with the Badgers in 1990.

Granato told the Sabres that March 18 night that they could be a different team in just seven to 10 days. Then he had to make them believe it.

There is no question Granato has accomplished that. The Sabres lost six more consecutive games to start his tenure, pushing the winless streak to 18.

The Sabres have gone 8-10-2 since busting their slump. They feel like a different team, and that’s after trading away Taylor Hall, Brandon Montour, Eric Staal and Curtis Lazar.

It’s always dangerous to evaluate a team that piles up wins late in the season once the pressure is off, but Granato has arguably done more with less than any other coach over the past half season. Over the last 10 games, the Sabres have iced a lineup with a total salary cap hit averaging $38.9 million, according to CapFriendly.com – less than half of the $81.5 million cap.

They battle. Under Granato, Buffalo has three wins when trailing after two periods – more than every team in the league except one. And there have been marked individual improvements.

Rasmus Dahlin has suddenly looked like the No. 1 defenceman he was drafted to be. Four of his five goals this season have been scored with Granato behind the bench, and his average ice time is up a whole minute versus Krueger. Fellow first-round pick Casey Mittelstadt had just one goal and four assists in 13 games under Krueger. He has nine goals and nine assists in 27 games under Granato.

Since his cancer diagnosis, Granato has been an NHL scout, an assistant coach in the NHL and NCAA, and an AHL head coach. But he believes it was his three seasons learning about what makes today's young stars tick as head coach of the U.S. National Development Program that prepared him best to be an NHL head coach.

That longer and winding road is why he has confidence he has staying power in the NHL, something that some of the other AHL coaches in 2000-01 that beat him to the NHL, did not have.

One of the other players he coached there for three months? Jack Eichel.

Heading into an off-season with the Sabres staring down many questions, Granato - the coach with a proven track record of developing young players - may have the answer to the most important one in Eichel. He could be the connective tissue that helps mend a weathered fence.

“I got along well with Jack,” Granato said. “I think the issue for Jack is he’s shouldered all of it here. When he’s on a two-on-one with five minutes left and the game is on his stick, he knows he has to be the guy, or he’s the one facing the blame after the game. That is a different level of pressure.”

The next Sabres coach is the other burning question. Granato said he hasn’t put much thought into his own future and what's next – even with one game remaining on the slate. Adams is on record as saying he will cast a wide net on his coaching search. Granato has never even interviewed for an NHL head coaching job, because he hasn’t had the chance.

That may soon change. Whatever is in the cards, it won't be bleak.

“If I am here, great. I would absolutely love that,” Granato said. “If I’m not a fit, well, I’m grateful for the opportunity I just had. I’ve developed not just a faith, I enjoy the journey. I mean that when I say it. Whatever happens, 100 per cent, I will be good. I will be happy.”