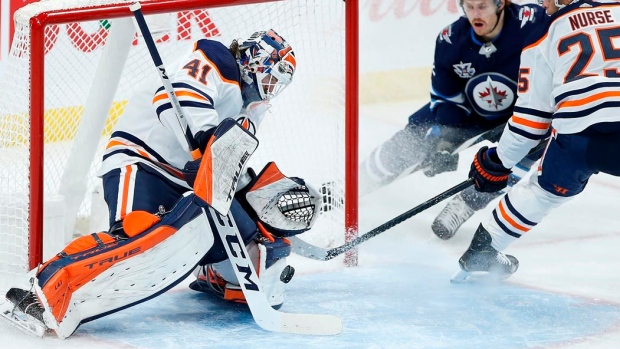 One word is rarely a window into the soul. But by saying so little, Mike Smith revealed so much about the competitive fire that rages in him with a response to a question earlier this month.

Reporter: “Is there extra satisfaction for you putting probably the final nail in Calgary’s playoff hopes here?”

The response was equally as telling as the smouldering smile and nod.

“To say Mike Smith is very competitive, that’s probably an understatement,” said Marty Turco, Smith’s former teammate on the Dallas Stars and one of his close friends. “He will use any motivation he can find. He loves to prove people wrong.”

That hunger, that drive to prove people wrong is a big reason why the 39-year-old Edmonton Oilers netminder is TSN Hockey’s Comeback Player of the Year in the non-Oskar Lindblom category.

There is no competing with Lindblom, unto a class of his own after overcoming Ewing’s Sarcoma – a form of bone cancer – last year and making it back to score eight goals over 50 games with the Philadelphia Flyers this season.

Even in the non-Lindblom category, Smith had worthy competition. Marc-Andre Fleury recovered from a sword in the back in Vegas to post a career-best .928 save percentage and sub-2.00 goals against-average as the Golden Knights allowed the fewest goals in the NHL.

Smith’s teammate Jesse Puljujarvi made his way back to Edmonton after declaring he would never play for the Oilers again and became a force, scoring at a 23-goal pace over 82 games.

Drew Doughty, Joe Pavelski and Alex DeBrincat all bounced back with strong seasons.

But the argument could be made that Fleury never actually had a downturn in his game.

The same can’t be said for Smith, who appeared to be out of a job when the Oilers were bounced out of their hometown bubble and upset by the 12th-seeded Chicago Blackhawks last August in the qualifying round.

Smith was tapped for the Game 1 start. He allowed five goals in 26 minutes and was yanked in favour of Mikko Koskinen, who was no better with a .889 save percentage in the quick series.

“We didn’t play very well and he didn’t have a great start in Game 1,” Oilers coach Dave Tippett said this week on TSN 1050 Radio. “Then boom. We were out.”

It’s no secret that the Oilers targeted Vancouver’s Jacob Markstrom when free agency opened on Oct. 9. But after Markstrom signed with the rival Calgary Flames, GM Ken Holland was vilified for sprinkling that $6 million around with Plan B.

The Oilers instead signed Kyle Turris ($1.65 million), Tyson Barrie ($3.75 million) and brought back Smith ($1.5 million) to take another run in tandem with Koskinen.

To say the move did not inspire the Edmonton market with confidence, well, that would be as understated as saying Smith is merely “very competitive.” Oil Country spewed venom.

Barrie went on to lead all defencemen in scoring with 48 points. And Smith saved the Oilers’ season.

The Oilers were 6-7-0 before Smith made his first start on Feb. 8. Edmonton went 29-11-2 after Smith’s return from injury, the fourth-best record in the NHL during that span based on points percentage.

“He was a very motivated guy,” Tippett said. “He’s played really well, but he really wants to help this organization and the players in this organization get better. He’s a great leader. The guys thrive off of him in the dressing room. He’s really competitive.”

An NHL goaltending coach close to Smith, who asked for anonymity because he works for a competing franchise, described Smith last off-season as “like a shark.”

“You put a challenge in front of him and he eats that up,” the coach said. “Sharks don’t swim away. He is fiercely competitive. He has no anxiety.”

That has been Smith’s modus operandi his entire career. He was a fifth-round pick of the Dallas Stars in 2001 who had to start his career in the AHL while the Stars’ first-round pick that season, Jason Bacashihua, got top billing in the organization.

Bacashihua went on to play 38 games in the NHL. Smith is leading the Oilers into the playoffs at age 39.

“He’s just not one to roll over and accept his fate,” the coach said. “There’s been so many ups and downs, times it looked like he was going to be down and out. He decided he was just not going to be a backup. He loves the game, he loves competing.”

His first partner, Turco, recognized some of that in Dallas. He invited the younger Smith to live with him and his family. There was never any tension between the two, even though they were in competition for the same job – so much so that when Smith’s second season rolled around, he moved back in with the Turcos.

“A full fridge goes a long way,” said Turco, who still works for the Stars and owns Kingsville Brewery in Kingsville, Ont. “I think the relationships he formed with me and others, including Tipp in Dallas, has gone a long way for him. There is mutual trust there. He knows how he plays, how he acts. Tipp knows what he’s getting with Mike. And when you’re a goalie and you know you don’t have to look over your shoulder when you make a mistake, that really helps.”

It’s a unique relationship. There aren’t many coaches who have brought the same goaltender with them to three stops in the league, from Dallas to Arizona to Edmonton, like Tippett has with Smith.

Tippett recently called Smith “one of the best pure athletes I’ve ever coached.” He's harnessed that athleticism into technique. Turco said guidance from goaltender guru (and assistant GM) Sean Burke in Arizona was the major turning point in Smith’s career.

“He played him deeper in the net, used his size to his advantage,” Turco said. “That’s given his career longevity.”

Smith took it to another level last off-season. His puck-handling prowess was always a plus for teams breaking up the forecheck, taking pressure off the Oilers’ defence. But Smith looks more calm this season when in net. To listen to InGoal Magazine’s Kevin Woodley explain it, Smith’s “flops per 60” are way down this season.

“Smitty was methodical,” the NHL goaltending coach said. “He worked out with someone new and it was less a power approach and more of a supple approach. More flexibility, more agility. His butterfly was wider. He wasn’t as rigid. He’s let the play come to him – and he’s in his element of comfort.”

Better than his .923 save percentage, his best mark since 2011-12, the Oilers have fed off of Smith's personality and mantra, as evidenced by the “yup” quote.

“There’s more to it than just the goaltending,” Tippett said. “He’s been excellent in goal but he adds a presence to our team that our team has really dug into and adapted to.”

Smith has already turned back the clock. Now, the Comeback Player of the Year has one more wrong to right, and that’s last year’s playoff start. Yup, safe to say there is more than enough fuel for that fire.

“What he’s done this year has been remarkable, it’s a heck of a story,” Turco said. “It’s one thing to think about a 39-year-old playing this well, it’s another thing to say it out loud. This ole’ partner is thrilled for his success. Sometimes hard work does pay off.”