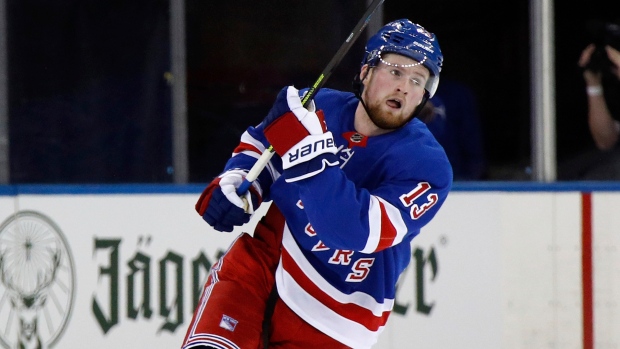 If you live in Canada, you might think the North Division is the National Hockey League this season.

Your belief would be reinforced with a look at the statistical leaderboards. It’s been all Canada, all the time.

Let’s shed a little light on the Lower 24 with the return of the Friday Five, giving thought to quips, questions and quotes that pop up around the league.

To say it’s been a tough go for Alexis Lafreniere in Rangerstown would be an understatement. With one goal and no assists in 15 games, Lafreniere is off to the worst start for a No. 1 overall pick since Patrik Stefan in the 1999-2000 season – and one of the worst of all time. Even then, Stefan had three goals and seven points in his first 15 games. Nail Yakupov, the No. 1 pick in 2012, also made his debut in a shortened season and finished with 17 goals and 31 points in 48 games. Yakupov had five goals and nine points by this point. Remember, Lafreniere, the 2020 Canadian World Junior hero, was expected to potentially have a 60-point impact as a rookie. The Rangers have struggled, and some have wondered about Lafreniere’s speed and stamina contributing to his skid, but confidence has to be a factor at this point.

2. Is this the year the Calder goes to a goalie?

The door is wide open for Chicago’s Kevin Lankinen and Washington’s Vitek Vanecek this season. Steve Mason was the last netminder to win Rookie of the Year, back in 2008-09 with the Columbus Blue Jackets. Lankinen, 25, has been nothing short of a revelation for the Hawks with a .931 save percentage in 12 starts, seizing hold of the No. 1 job while putting his name in the mix for Finland’s Olympic team. Vanecek, also 25, has admirably spelled the Caps in the absence of one of last season’s rookies in Ilya Samsonov while he was on the COVID-19 list. Vanecek is 7-3-2 with a .909 save percentage. Also, if the Rangers turn it around, don’t sleep on Igor Shesterkin, who has still managed a .918 save percentage despite a 3-5-1 record.

It’s hard to think of a more qualified man to fix what ails the Pittsburgh Penguins than newly hired GM Ron Hextall. The Pens rank 30th out of 31 teams in save percentage with a ghastly .881 mark. The league average this season is .903. Just playing at league average this season, or even slightly below it at .900, would have resulted in nine fewer goals to this point and pushed Pittsburgh’s goal different from minus-3 to plus-6. That is probably the difference between making and missing the playoffs in the razor-thin East Division, another reason why goaltending is Hextall’s first priority. There doesn’t appear to be an avenue open to pry Pittsburgh native John Gibson out of Anaheim. But would Darcy Kuemper fit the bill from Arizona?

It’s not Halloween, but that’s usually the time of year we’re asking ourselves these questions about a hot start to the season. Frankly speaking: It feels like Florida’s 10-2-2 run is a steamy mirage in the Everglades. Jonathan Huberdeau and Sasha Barkov have proven they can produce above a point-per-game pace. Patric Hornqvist and Carter Verhaeghe? Not so much. Chris Driedger has played out of his mind with a .924 save percentage. Florida’s power play has clicked with Keith Yandle, who was effectively booted from the team in training camp. Plus, there are some schedule effects. They have faced backups Curtis McElhinney and Alex Nedeljkovic in back-to-back games, haven’t faced the Dallas Stars yet, or felt the wrath of their now truly condensed schedule. We shall see.

The NHL is running out of runway with a team like the Stars, who had four games postponed this week due to the winter weather emergency in Texas. They were already scheduled to play at late as May 10, though the regular season was scheduled to conclude on May 8 and the Stanley Cup playoffs are to begin on May 11. The Stars now have 44 games to play over the final 80 days. It’s even more than that (45 games) for the COVID-stricken New Jersey Devils. The virus continues to wreak havoc on schedules, standings, stats, and the effects are far-reaching, including how we might vote and consider award winners, and even who might make/miss the playoffs if uneven schedules are played. It’s been a wild ride.