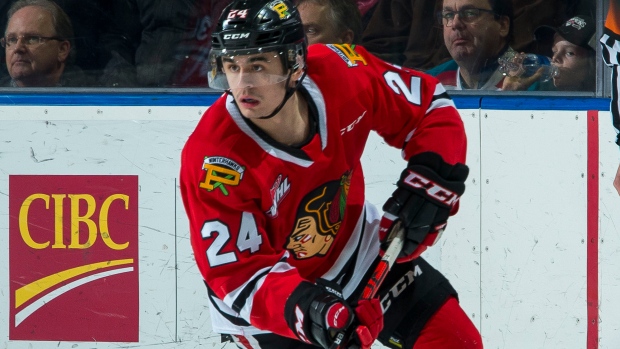 Watch the American Hockey League this season and it’s easy to see a happy accident that’s resulted from one of hockey’s forced experiments while stickhandling around the COVID-19 pandemic.

You’ll see something you’ve never seen before because it’s never been allowed: top teenage CHL prospects lighting it up, turning up the octane in the AHL.

The National Hockey League’s current transfer agreement with the Canadian Hockey League requires all draft picks under the age of 20 to be loaned back to their major junior club unless they are on the NHL roster or have completed four full junior hockey seasons.

But that transfer agreement, which expired in 2019-20 and was extended for one year during the pandemic, is up for negotiation again.

Many inside the game wonder if change is on the horizon, now that NHL teams have gotten a taste this season of what it’s like to keep, train and develop prospects in-house, and of how their top prospects fared in the competitive AHL landscape.

Seth Jarvis, Carolina’s No. 13-overall pick from October’s draft, netted seven goals and 11 points in nine games for the AHL’s Chicago Wolves before the Western Hockey League started up again and forced the Hurricanes to send him back to the Portland Winterhawks. The Calgary Flames got a similar first-hand view of first-round pick Connor Zary, who collected seven points in nine games with the Stockton Heat.

The Quebec Major Junior Hockey League has mostly been operating all season. Other 2020 picks are still skating in the AHL while the Ontario Hockey League sorts out its return to play plan.

Los Angeles’ second-overall pick Quinton Byfield has 10 points in 17 games for the AHL’s Ontario Reign, who play out of the Kings’ practice facility in El Segundo, Calif. Winnipeg’s Cole Perfetti, the No. 10 overall pick, has eight points in 16 games for the Manitoba Moose, and has skated in Jets practices as a member of the taxi squad.

Then there is 18-year-old Zayde Wisdom, who wasn’t drafted by the Philadelphia Flyers until the fourth round (94th overall), yet leads the Lehigh Valley Phantoms in scoring with 10 points in 12 games.

“It’s been so beneficial to have these guys around our organization,” one NHL GM said Thursday, asking to not be quoted because of the sensitivity around the agreement. “We would have loved to have kept our player. I think there’s a way to do it.”

The NHL-CHL transfer agreement is a touchy topic because, as AHL commissioner Scott Howson said this week, “everyone has so much respect for what junior hockey does for prospects and for the game as a whole.”

Not only that, but amending the CHL transfer agreement has seemingly been an annual talking point without any tangible change.

There is also a significant sum of grant money involved; the NHL is responsible for a big part of the CHL budget. The NHL agreed to pay the CHL a total of $12.6 million in grants for the 2019-20 season, according to a copy of the agreement. Teams are also required to pay $60,000 for skaters and $75,000 for goaltenders who are eligible to return to junior but remain in the NHL.

A second GM said Wednesday that the CHL transfer agreement was a topic of conversation last March at the NHL’s GM meetings in Florida that went quiet once the pandemic hit. And while NHL GMs are mindful of the junior hockey business, they are also trying to look out for their own business interests at the same time – and it's no secret they'd like to keep their hands on their prospects as much as possible.

The second GM's idea is to carve out an exception in the next CHL transfer agreement that would allow each NHL organization the option to place one 18- or 19-year-old prospect in the AHL. There could be certain criteria put in place – that the prospect be a first-round pick, or he must have played three seasons of major junior.

Part of the problem with the current agreement, the GM said, is that players on the fence between the NHL and OHL often end up stunting their development because teams err on the side of keeping them at the NHL level.

It’s the exact question facing the Anaheim Ducks later this season with 2020 first-round pick Jamie Drysdale if and when the OHL season gets underway. Drysdale, 18, had 10 points in 14 games with the San Diego Gulls before being called up to the Ducks, where he was scheduled to make his NHL debut on Thursday night against Arizona. The Ducks could then keep Drysdale in the NHL, or as a member of the taxi squad, without having to send him back to the OHL. ​

“If I have a defenceman who is too big and too strong for the WHL, but is too slow for the NHL, what do I do?” the GM asked.

The best option might be in the middle, in the AHL, where that player can work with the organization’s staff directly.

While we may only be talking about a handful of players per season who meet the theoretical exception requirements, there are also cons to having teenage players turn pro.

Statistically, players aged 18 to 21 are far more likely to miss time due to injury in the NHL, and that likelihood may even increase in the AHL. Then there will also be a trickle-down effect that potentially damages midget hockey, as players would need to fill those holes on major junior rosters.

To date, the pros have not outweighed the cons, which is why no change has materialized.

Instead, the AHL has been respectful of critical timelines to return players to major junior, while Howson has focused on a potential playoff format – even if awarding the Calder Cup this season remains unlikely.

“I think we would have all preferred for the junior leagues to be up and running and everyone be healthy,” Howson said. “That top prospects have been able to play this season has been an added benefit to our NHL partners. I’ve been so impressed by the quality and level of player, every single player’s commitment in this unusual season has been incredible.”