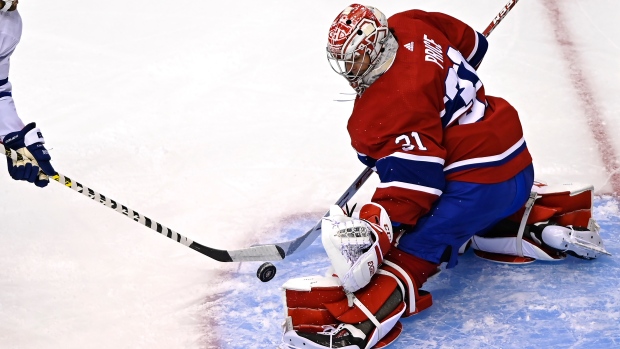 It’s that time again, just a little later than usual, for my annual opportunity to look like a moron. There were hits, but plenty of misses, in last year’s picks. (Definitely didn’t see that pandemic coming, either.)

In hindsight, we were probably a year early in selecting the Colorado Avalanche to win the Stanley Cup. They might have if not for losing both goaltenders in the playoffs last August.

The key is to go bold or go home. We’re not going to waste your time with the obvious.

We’re doing it a little differently this year, not requiring one selection for each team, but we’re back with 31 bold (or boneheaded) predictions for the 2020-21 NHL season:

1. The Montreal Canadiens will stand atop Canada as Kings of the North (Division) on May 8. This dynamic and creative team won’t be pushed around any longer, with some added heft in Josh Anderson and quality depth pieces throughout GM Marc Bergevin’s lineup.

2. Canucks defenceman Quinn Hughes will capture the Norris Trophy in his sophomore season, becoming the youngest winner of the award since Erik Karlsson in 2011-12. Hughes, 21, processes the game at an exceptional level and has the skill and experience to take another step this season.

3. Patrik Laine WILL be traded before the April 12 TradeCentre deadline. Feels like much will be determined by Laine’s start to a pressure-packed season. Keep an eye on two potential destinations: Columbus (Pierre-Luc Dubois?) and Carolina (Brett Pesce/Vincent Trocheck?).

4. Laine’s trade will be one of just three of consequence between Canadian and American clubs this season. With current quarantine restrictions in place in an already shortened season, the threshold for a player’s impact will have to be high in order to justify him being unavailable to his new team for a number of games.

5. The Detroit Red Wings won’t have to look very far for the No. 1-overall pick after winning the Draft Lottery. They’ll select 6-foot-5 defenceman Owen Power from just up the road in Ann Arbor at the Univ. of Michigan, redemption for dropping from one to four in the Alexis Lafreniere lottery.

6. TSN Edge™ best long shot bet this season: Sidney Crosby at 25-to-1 (+2500) to win the Hart Trophy. Because it’s not bold to pick Connor McDavid or Nathan MacKinnon.

7. Penguins GM Jim Rutherford will take home the Jim Gregory General Manager of the Year Award. Pittsburgh has improved significantly, now armed with their best defence corps in mobility and depth in years, as Rutherford has tried to do everything possible to extend the window for Crosby and Evgeni Malkin to win.

8. Carey Price will capture his second Vezina Trophy, reverting to the all-world level form that we last saw from him in 2016-17 - the last time he was a Vezina finalist. With Shea Weber, Ben Chiarot and now Joel Edmundson, Price is better insulated in Montreal than he has been in years.

9. Ryan Nugent-Hopkins will become the No. 1 target on TSN’s Top Free Agent list for 2021. There is no question fan (and team) favourite RNH wants to remain in Edmonton. But to this point, negotiations have gone in fits and starts, and the Oilers have made it clear they have no plans to go north of $7 million per year on a long-term extension.

10. Auston Matthews’ goal total in 2020-21: 40 goals. (That’s a 59-goal pace in an 82-game season and enough for the Rocket Richard.) This is his year, his moment to take another step and help carry the Maple Leafs to another level.

11. Zach Bogosian will be the Maple Leafs’ best value signing of the off-season, not Mikko Lehtonen, Wayne Simmonds or Joe Thornton. Bogosian ($1 million) was brought in to be a pure shutdown defenceman, a critical role with Toronto’s style of play.

12. That’s the number, twelve, that Alex Ovechkin’s new salary cap hit starts with next season on an extension in Washington. Sources say his initial pre-pandemic ask was $12.5 million. His current 13-year, $124 million deal will go down as one of the best contracts in pro sports history for both team and player.

14. The Seattle Kraken will hire Gerard Gallant as the first coach in franchise history. No one knows better how to bring together a collection of expansion cast-offs, turning the Golden Misfits into the Golden Knights and nearly leading Vegas to the Stanley Cup in 2018.

15. Brent Burns will be the biggest name exposed in the 2021 Expansion Draft. But the Kraken’s best pickup will come from either Carolina’s blueline or one of the Lightning’s salary cap casualties left exposed.

17. The Boston Bruins will fail to qualify for the playoffs for the first time since 2015-16. It’s a transition year for the Bruins, and someone has to fall short in the East. Boston said goodbye to Torey Krug and Zdeno Chara, plus David Pastrnak and Brad Marchand aren’t 100 per cent to start. Then there is the possible residual effect from Tuukka Rask’s departure last playoffs.

19. Another Jets prediction: Rookie defencemen Ville Heinola and Dylan Samberg will quickly overtake Derek Forbort and Nathan Beaulieu in Paul Maurice’s lineup. And Winnipeg will be much better for it.

20. Philadelphia Flyers forward Nolan Patrick will be the NHL’s comeback player of the year. Patrick, 22, last played in the NHL on April 4, 2019 – a span of nearly two full calendar years – and missed the entirety of last season with a migraine disorder. The 2017 No. 2 pick will bounce back with a 50-point pace season as an impact player in Philly.

21. The Edmonton Oilers will make a trade for a goaltender before the deadline. We believe GM Ken Holland sniffed around for one last deadline – and didn’t land his man in free agency, opting to bring back Mike Smith with Mikko Koskinen. There will be options available as teams jockey for Expansion Draft positioning.

22. One of the pillars of the Blackhawks’ three Stanley Cup championships, Duncan Keith, politely asks out of Chicago after a difficult season to chase the prize elsewhere. Keith, 37, only knows how to win. He will have two seasons left at $5.5 million.

24. NHL Players’ Association executive director Don Fehr will begin to implement an exit strategy. Fehr turns 73 in July and after guiding the NHLPA through two gruelling CBA negotiations, it’s a natural time to transition power after securing the players’ appearance in the 2022 Beijing Olympics.

(For the record, Fehr’s counterpart in NHL commissioner Gary Bettman, who turns 69 in June, recently said: “I’ll work as long as the owners have me.”)

25. Josh Norris will lead the Ottawa Senators in scoring. The reigning AHL Rookie of the Year will take a serious run at the Calder Trophy for NHL rookie of the year on a line with Brady Tkachuk and Drake Batherson.

26. Difficult Contract Talks Department: Rod Brind’Amour will have tense moments trying to earn market value among head coaches in Carolina. Owner Tom Dundon has drawn the line previously, saying goodbye to precious assets both on the ice and off, for talent that does not want to fit within his reimagined (lower) pay scale. Brind’Amour is one of five head coaches on expiring deals this season, including Jeff Blashill, Travis Green, Rick Tocchet and John Tortorella.

27. The NHL will consider a dual class 2021-22 Draft for prospects, expanding the number of rounds and picks available for teams. With major junior seasons in jeopardy, including next season might be the only way to give teams a fair opportunity to evaluate prospects after COVID-19 has wreaked havoc on scouting.

28. Calgary Flames blueliner Juuso Valimaki will become a stealth Calder Trophy candidate. Valimaki, 22, was ready to jump into the Flames’ top four last season but sustained a difficult knee injury. He barely meets the qualifications for the Calder, but he’s more than just a rookie – he’s one of the linchpins to Calgary’s season.

29. Discussion on adding advertisements to jerseys will be tabled. There just isn’t enough revenue yet for the NHL to grab there to make that jump worthwhile.

30. Minnesota’s Dean Evason will win the Jack Adams Award as the NHL’s coach of the year. It’s the next step in a coaching journey two decades in the making that has touched just about every level, from WHL head coach to longtime NHL assistant, to AHL head coach, now with the interim tag removed for the playoff-bound Wild.

31. The Washington Capitals will hoist the Stanley Cup for the second time in four seasons. There are no holes on this retooled Caps roster. They’ve hired a Stanley Cup-calibre coach in Peter Laviolette, ooze leadership with Zdeno Chara, and a 56-game season is just the ticket for a team whose core might be getting a little long in the tooth.