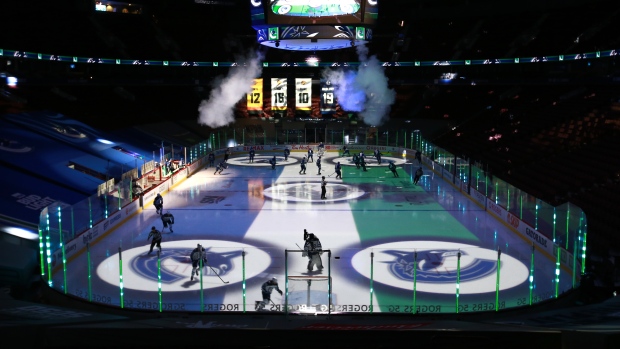 The news that six additional Vancouver Canucks players will appear on the NHL’s COVID-19 protocol list Friday after positive tests, marking Canada’s first team-wide flare-up of the virus, did not create a ripple in and of itself.

More positives were to be expected, especially since forward Adam Gaudette tested positive after initially participating in Tuesday's practice.

Defenceman Travis Hamonic was added to the protocol list on Thursday along with a member of the Canucks’ coaching staff. That brings the total number to eight players and one staff member in the protocol, after the initial two alone triggered the postponement of three games through April 6.

The real question is: What happens next?

With only three games postponed as of now, one in Edmonton and two in Winnipeg, the make-up schedule is somewhat manageable for NHL matrix guru Steve Hatze Petros.

For instance, one more game could be added to the Canucks’ stop in Edmonton on April 15, then the two final games against Winnipeg could be tacked on to the schedule on May 10-11. The NHL has already added eight make-up games to the docket on May 10, past the scheduled regular season end date of May 8. That would make for three games on May 11.

But the NHL hasn’t broken the May 11 barrier yet – a date that was originally slated to be the opening night of the Stanley Cup playoffs.

If the Canucks’ next two scheduled games in Calgary must also be postponed, well, then the NHL will have to consider extending beyond May 11 or the alternatives.

If it’s two Calgary-Vancouver games that remain in the balance, contests likely to not have playoff implications, the NHL could choose to forego those and consider using points percentage to place the Flames and Canucks for draft lottery purposes.

To this point, the NHL has purposely not publicly outlined its plans for what will happen if teams fall short of the 56-game scheduled season. The league preferred instead to cross that bridge when they come to it. They are close.

For now, the NHL plans to take time to formulate a gameplan.

Thursday’s press release indicated that “pending test results in the coming days,” the Canucks could avoid additional postponements and return to the ice on April 8.

That would seem to be out the window with Friday’s news of six additional players in the protocol.

With two players in the protocol, the Montreal Canadiens went 10 days between games, and four games were rescheduled, creating a ripple effect throughout the North Division schedule.

It’s not out of the realm of possibility that with four times as many players in the protocol – a number that may grow – the Canucks will be off the ice for two weeks. There is already little runway left now for the NHL to stay within that May 11 window, not with the other North Division schedules nearly maxed out.

While the Canucks take a deep breath, that may be easier said than done for anyone close to the Vancouver dressing room.

Gaudette’s wife, Micaela, tweeted an update on Thursday that Gaudette “isn’t in great shape, but I’m taking good care of him.”

Micaela also wrote: “People on Twitter are ruthless. A human being gets sick with a virus we don’t know much about and yalll [sic] are angry at him because you can’t watch a game on tv?”

No matter what comes next on the schedule, her words were a needed dose of perspective.

Remember, Hamonic is in it now – and he was the first player to opt out of the NHL’s return to play bubble in Edmonton last summer, saying in a statement that his decision came out of concern over his young daughter, who was hospitalized in 2019 with a respiratory virus.

“We saw what a respiratory virus can do to our healthy little girl and it’s something no parent wants or should go through,” Hamonic wrote. “My family has and always will come first.”