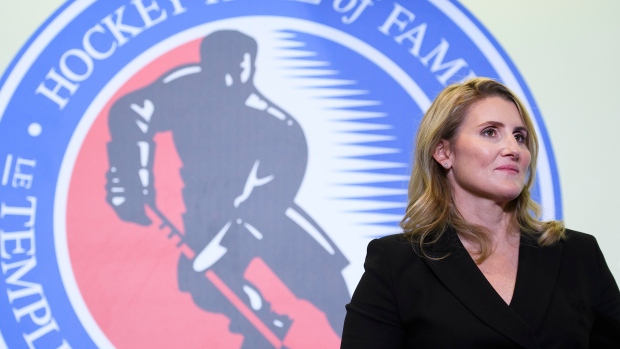 You can now officially call her Hayley Wickenheiser, M.D.

Those are two incredible letters to add to any name at any time, let alone one enshrined in the Hockey Hall of Fame as one of the most accomplished players of all time.

But to graduate from medical school at the University of Calgary and pass the requisite licensing exam in the middle of the first global pandemic in a century?

“Us graduating medical school students have had the most unique experience ever,” said Wickenheiser, who did her clinical rotations in Toronto. “I was in the same hospital at the same time Ontario’s first COVID-19 patient tested positive.”

Wickenheiser has everyone in awe – including her full-time employer in the Toronto Maple Leafs, where she would trade her scrubs and white coat for a track suit after her shift would end at the hospital to work in the team’s player development department.

“What Hayley has contributed most to our program is that Hayley challenges everyone she comes into contact with to challenge what they may be capable of as an athlete, staff member and a teammate,” Leafs general manager Kyle Dubas said Tuesday.

“Anyone in our organization who thinks that they have reached their potential and limit only needs to look at all Hayley has accomplished and continues to accomplish in order to realize we all have a lot more to give to our community, to our club, and ourselves.”

Now, the challenge – even for someone who describes herself as a “professional multi-tasker” – will continue as Wickenheiser packs to move east from Calgary to Toronto in an attempt to pursue both of her passions at once.

Wickenheiser, 42, will soon begin her residency at a Toronto hospital in the emergency department. She has also re-signed with the Maple Leafs, where she will continue in a full-time capacity as assistant director of player development.

It is ambitious, but Wickenheiser knows no other way. She has also already juggled this routine for the past couple years.

“In some ways, it will actually be easier now living in Toronto,” Wickenheiser said. “I will now be in Toronto full-time. There will time to be at the rink and there will be time at the hospital in rotation – whether it’s at night or during the day.

“I’ve been very clear in my goals and it’s definitely doable. But it wouldn’t be possible without great bosses like Kyle and Brendan [Shanahan], who recognized right away that medicine is less flexible than Leafs and they’ve allowed me to work around that schedule."

Wickenheiser said she got emotional in late April as medical school wrapped. After completing her final three-hour surgery exam, she was handed a letter that she wrote to herself three years earlier when she began her journey.

“My writing was so messy. For the first minute I read it, I didn’t know what it was. I completely forgot that I had even written it,” Wickenheiser said. “But I started to cry because it brought me back to why I wanted to go into medicine. Every word reinforced what I believed, to stay true to yourself, be a team player, take care of yourself.

“That was my beacon or guiding light and it felt good that I had never lost that."

A letter I wrote myself 3 years ago when I started med school. Today, I wrote my last exam, and they handed the letter back. I gave up Harvard to stay in 🇨🇦 years ago, and I'm glad I did. Congrats to all my fellow Limpkins and thank you to @UCalgaryMed for a terrific education. pic.twitter.com/BxaaDeKB0K

There is incredible power in writing down your dreams and then making them a reality.

Wickenheiser saw just about every angle of medicine over her rounds, finding some parts intriguing and others less so. She worked in the emergency department, surgery, obstetrics, intensive care, telemedicine and family medicine, among others.

“It was fascinating. I found the family medicine block to be the hardest,” Wickenheiser explained. “I love emergency and I think that is just more aligned with my personality. There is a lot of action that comes with that, there is constant change. It’s in my nature to run towards that action instead of away from it. But it’s not for everyone.”

Wickenheiser wasn’t just on the literal front lines in the hospital, she was also at the front of the line in working with and amplifying charitable causes during the pandemic.

“In addition to completing medical school and performing duties here as a leader of our player development program, when the pandemic began, Hayley used every ounce of remaining free time to lead the fight against COVID-19. Not just by using her social media and public presence, but by actually being on the ground and raising awareness, funds and PPE drives early – before shifting to vaccine awareness and promotion,” Dubas said.

As for her long-term future beyond the next two years of residency and her new contract with the Maple Leafs? Wickenheiser isn’t sure.

Three years ago, Wickenheiser predicted in her letter to herself she’d be an emergency doctor. “Maybe dabble in peds [pediatrics] and sports medicine, maybe work in a tent in Africa somewhere.”

“Who knows?” she said. “I only know one thing about this, and that’s medicine gives you wings. This is freedom to do a lot of different things.”

Maybe Wickenheiser will put medicine on hold, become the first female coach on an NHL bench, or rise through the ranks in management.

“I honestly don’t know. Hockey is less of a sure thing. We’re all hired to be fired,” Wickenheiser said. “I just know I’m not ready to give up hockey. I like what I do right now. I love to be in the grind, in the video room, watching hockey. I love helping players get better. We’ll see what kind of opportunity might come up. The world is changing. For now, my plan is to survive residency.”