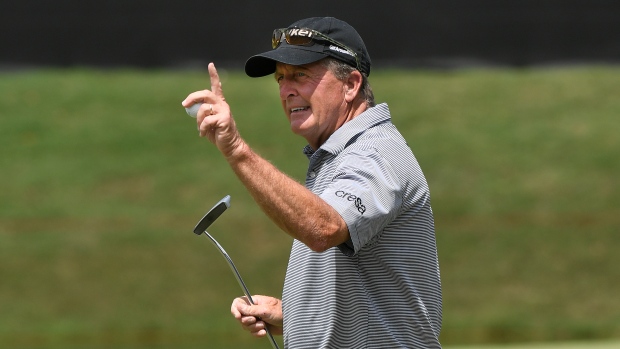 SNOQUALMIE, Wash. — Fred Funk shot an 8-under 64 and held a one-shot lead over hometown favourite Fred Couples after the first round of the Boeing Classic on Friday.

Starting on the back nine at Snoqualmie Ridge, Funk birdied four of his first five holes and turned in 31. He made his only bogey on the par-4 fourth, but rebounded with two more birdies.

Funk hasn't finished higher than a tie for 22nd this season and Friday's round was his lowest since 2016. Funk hasn't won a PGA Tour Champions event since 2014.

The 63-year-old nearly shot his age.

"I'm just going to enjoy tonight and worry about tomorrow and Sunday when they come around," Funk said. "If I can keep giving myself opportunities, that would be a lot of fun. And keep that putter, man, my putter was beautiful today. That was great."

Winning just a short drive from where he grew up in Seattle has been a goal for Couples since he started playing in the Boeing Classic. Couples has three third-place finishes in the event, the last in 2015.

Couples has sometimes gotten off to slow starts in the tournament but played flawlessly on Friday. He made three birdies on the front nine and ran off four birdies in a row starting on the par-3 13th. Couples missed a chance to tie the lead when his second shot on the par-5 18th found a greenside bunker and he failed to get up-and-down.

Couples finished second last week at the Dick's Sporting Goods Open and said he played there in part to get ready for this week.

"I did go there so I would be a little more prepared and I think it's paid off," Couples said. "I really do like this course; just a lot of times I come up here with so much time off that I shoot 71 or 72 and you can't do that on this tour. You've got to really shoot in the 60s the first day and work your way up there."