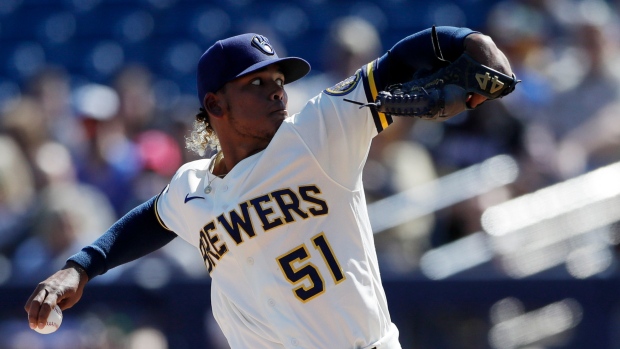 PHOENIX — Freddy Peralta gave his mom an unforgettable Mother's Day in 2018, striking out 13 while winning his major league debut as she looked on at Coors Field.

Two years later he gained financial security for his family, finalizing a $15.5 million, five-year contract with the Milwaukee Brewers on Friday.

The deal for the 23-year-old right-hander covers two years of club salary control and his three years of arbitration eligibility. There are a pair of team options that if exercised would raise the value to $30 million over seven seasons.

If he turns into a star, the Brewers will have him at far under market value. But for now, he has a contract guaranteeing nearly 30 times the $533,258 he earned last year.

"I'm happy," Peralta said. "Really, really happy. It's something that I've been working for."

His mother, Octavia, cried when he called on Wednesday to give her and his father, Pedro, news of the deal.

"She was just remembering things that happened before, a long time ago," Peralta said. "My dad, he cried too -- more than my mom. ... I was feeling like I was going to cry, too."

Peralta said the negotiations moved quickly and his agent wasn't in favour of passing up the potential to earn larger salaries in later years. Security was a driving factor.

"I know they wanted to wait a little longer," Peralta said. "but it was my decision, and I made the decision for myself and for my family and be in a position where I can play relaxed."

"It helps with planning and that's a big part of what we do," president of baseball operations David Stearns said.

Peralta signed with Seattle in 2013 as a 16-year-old from the Dominican Republic for $137,500. Obtained by Milwaukee from the Mariners in the December 2015 trade that sent first baseman Adam Lind to Seattle, he was 6-2 with a 3.10 ERA in 13 starts for Triple-A Colorado Springs when he was called up to make a spot start in place of Chase Anderson on May 13, 2018.

He went 6-4 with a a 4.25 ERA in 14 starts and two relief appearances for Milwaukee that season and added three scoreless innings against the Los Angeles Dodgers during the playoffs. He began last season in the rotation but was 1-1 with an 8.31 ERA in five outings when he was sent to the bullpen for the first time. He pitched exclusively in relief from mid-June on and finished 7-3 with a 5.29 ERA in eight starts and 31 relief appearances that totalled 85 innings.

Being able to take care of his family for years to come made Peralta proud. But first, a teammate is imposing another financial obligation.

"Corey Knebel gave me a hug, and he told me, 'OK, you've got the pitcher dinner,'" Peralta recalled. “I said, yes, of course.”