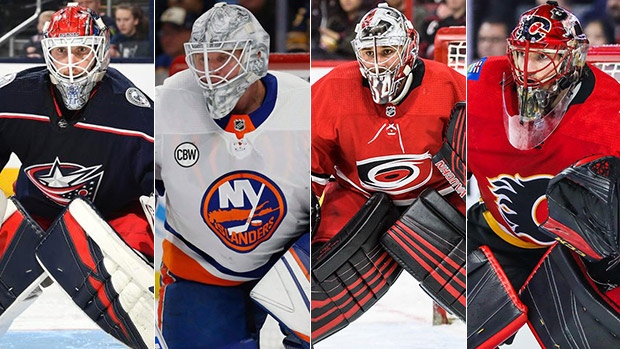 ‘Round and around we go, when it stops, no one knows.

The music has been playing since the league’s free agent interview period officially opened on Sunday, and netminders are scrambling to find the few empty seats before it stops – likely well before Free Agent Frenzy on Canada Day.

“I honestly believe that the goaltending market will be sorted out very soon,” one prominent agent said on Monday. “I’m thinking we’ll have a very clear picture in the next 24 to 48 hours of what it will look like.”

There is no question two-time Vezina Trophy winner Sergei Bobrovsky is the alpha dog, operating in a different stratosphere than the rest of the pack. He is the Florida Panthers’ clear No. 1 priority this off-season – which has been one of hockey’s worst-kept secrets for months.

Bobrovsky, 30, checks in at No. 3 on TSN Hockey’s latest Free Agent Frenzy ranking – the third part of the trio of Columbus Blue Jackets atop the board.

He is coming off an incredible end to what was previously a disappointing contract year. Bobrovsky carried the Blue Jackets to the playoffs, going 10-3-0 down the stretch with four shutouts and a .946 save percentage, before leading Columbus to its first-ever series win with a shocking sweep of Tampa Bay.

There were rumblings during the season that Bobrovsky may be looking for Carey Price money. The Panthers are seemingly the only team out there able to pay that freight.

But as Erik Karlsson found out when he re-signed in San Jose, it only takes one.

Bobrovsky is expected to visit the Panthers’ brass this week, where new coach Joel Quenneville will also try to pitch his teammate Artemi Panarin on a package deal.

Below Bobrovsky on the pay scale, teams say the dollars have been difficult to estimate since Mikko Koskinen signed a three-year, $13.5 million extension in January. Multiple teams have cursed that specific contract as one that has made their chase more expensive than anticipated.

Robin Lehner is the next goaltender on the list at No. 10. The Masterton Trophy winner’s camp has reportedly said he is not interviewing with other teams, focused solely on staying with the New York Islanders.

So if Bobrovsky is pencilled in to Florida, and Lehner is staying on Long Island, that’s two seats gone in the game.

That leaves the Edmonton Oilers, Calgary Flames, Carolina Hurricanes, Philadelphia Flyers, and Blue Jackets in search of a starter – or at least a goalie to play in tandem with their current guys.

The Oilers reportedly expressed interest in pending UFA Petr Mrazek from Carolina. New GM Ken Holland knows Mrazek well from his time in Detroit, he could work well in tandem with Koskinen. Free agent Mike Smith, coming off an impressive playoff series in Calgary, also made 310 starts for Dave Tippett in Arizona.

Smith, 37, has also interviewed in Carolina. If the Hurricanes don’t keep Mrazek or Curtis McElhinney, who both played in their run to the Eastern Conference final, then Smith could fit in tandem with either Alex Nedeljkovic or newly acquired Anton Forsberg sharing the load.

Cam Talbot finished his season in Philadelphia. The Flyers have remained in touch with Talbot, and he was pitched on a new team on Monday, but the smart money is on Talbot returning to Alberta … to join the Flames. Talbot could join Calgary on a one-year, “prove it” contract.

That leaves the Flyers searching for someone to help guide rising sophomore Carter Hart and one more chair left in Columbus vacated by Bobrovsky.

Semyon Varlamov, Michal Neuvirth, Keith Kinkaid, Brian Elliott and Chad Johnson are among the other free agents hoping to land in a spot before the music stops.

Here's one I didn't see coming: 13 #NHL teams have already expressed interest in John Gilmour (Group VI UFA). Gilmour, 26, had 20 goals (!) and 54 points as a defenceman this year in AHL Hartford. Could well be this year's Austin Czarnik.