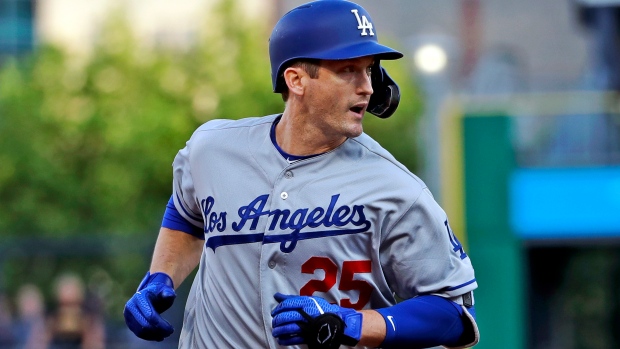 PITTSBURGH — David Freese stepped into the batter's box, heard the polite applause from the crowd at a ballpark he once called home and was surprised when the familiar strains of Tool's "Stinkfist" blasted through the speakers at PNC Park.

The Pittsburgh Pirates played the song as a token of respect for the veteran infielder, who spent two-plus seasons in black-and-gold before being traded to the Los Angeles Dodgers last summer. Freese took in the moment and relaxed. But only briefly. The cheers that greeted him Friday night were quickly replaced by a groan after he turned on a Michael Feliz fastball for a first-inning grand slam that powered the Dodgers to a lopsided 10-2 win.

"They played my walk-up song, maybe that's why I'm pumped," Freese said. "It fired me up."

The Pirates gave Feliz his first major league start in 157 career appearances in an effort to address their injury-riddled starting rotation. The opener strategy backfired for the second time in three days. Feliz (2-1) — who learned he was getting the ball first when he showed up for work four hours before the first pitch — recorded just one out and exited after Freese's third career grand slam.

The surprise decision to start Feliz initially threw Los Angeles manager Dave Roberts off balance. He switched his platoon-heavy lineup three times before settling on one he hoped would be effective against the right-handed Feliz and left-handed Steven Brault, who Roberts correctly figured would come in whenever Feliz exited.

That exit came earlier than Pittsburgh anticipated when Freese belted his first grand slam since May 17, 2013, for the St. Louis Cardinals.

"We understood with the opener you get a guy who has pitched a lot," Roberts said. "This was three out of four (days) for Feliz. His pitch count was up in that first inning and for David to stay out over it — get to a 3-2 count, see a ball up and out over and go to his strength which is right-centre field. He put a really good swing on it and obviously right there changed the game."

Staked to a five-run lead before he threw a single pitch, Walker Buehler (5-1) cruised through six innings, allowing one run and five hits. Buehler threw 74 of his 99 pitches for strikes and credited catcher Austin Barnes for calling breaking balls early in counts in an effort to challenge Buehler and keep him mentally sharp.

"I think when you pitch with a lead, sometimes you can get a little careless and just throw fastballs to get ahead," Buehler said. "You've got to tip your cap to (Barnes) for keeping me in there and keeping me engaged. So, it was a tricky deal pitching with a lead like that, but we'll take it every time."

Cody Bellinger, whose 45-game on-base streak ended Wednesday, kick-started another one by hitting a two-run shot in seventh off Geoff Hartlieb for his 18th home run of the season. By then the Dodgers had things well in hand. Bellinger finished 1 for 5, and his major league-leading batting average dipped to .389.

Kevin Newman had an RBI double for Pittsburgh. First baseman Josh Bell, who began the day leading the majors with 47 RBIs, went 1 for 4.

Injuries to Jameson Taillon and Trevor Williams and the decision not to bring a starter up from the minors led the Pirates to use an opener three times in a week. Montana DuRapau took the first two turns before Feliz got a shot, something Hurdle said "wasn't one of our first thoughts breaking camp because of the depth of our rotation and the things we had in play."

Whether the Pirates will use an opener again is uncertain. A doubleheader in Cincinnati looms on Monday and the team has yet to announce a starter for either game. The results so far have been mixed at best.

"Can some guys do it? Some other people have done it in other places," Hurdle said. "Our two guys here, I think it was something different for him. More opportunities. Maybe they get better. Unfortunately up here everything's magnified when it doesn't work."

Dodgers: RHP Joe Kelly was placed on the bereavement list, and OF Kyle Garlick was recalled from Triple-A Oklahoma City. Kelly is expected to rejoin the team on Monday. ... RHP Pedro Baez (right leg contusion) went through a pregame workout and could return to action over the weekend after getting hurt against Tampa Bay on Tuesday.

Pirates: LF Corey Dickerson (strained right shoulder) went 0 for 4 with two strikeouts in a rehab start for Triple-A Indianapolis. ... RHP Chris Stratton left after throwing six pitches in the seventh inning. Stratton grimaced after firing a strike to Joc Pederson and motioned for the trainer before exiting with right-side discomfort.

Dodgers: Hyun-Jin Ryu (6-1, 1.52 ERA) will look for his fifth straight win on Saturday. The 32-year-old left-hander has allowed just four walks in 59 1/3 innings this season.

Pirates: Joe Musgrove (3-4, 3.67 ERA) is winless in two career starts against the Dodgers.